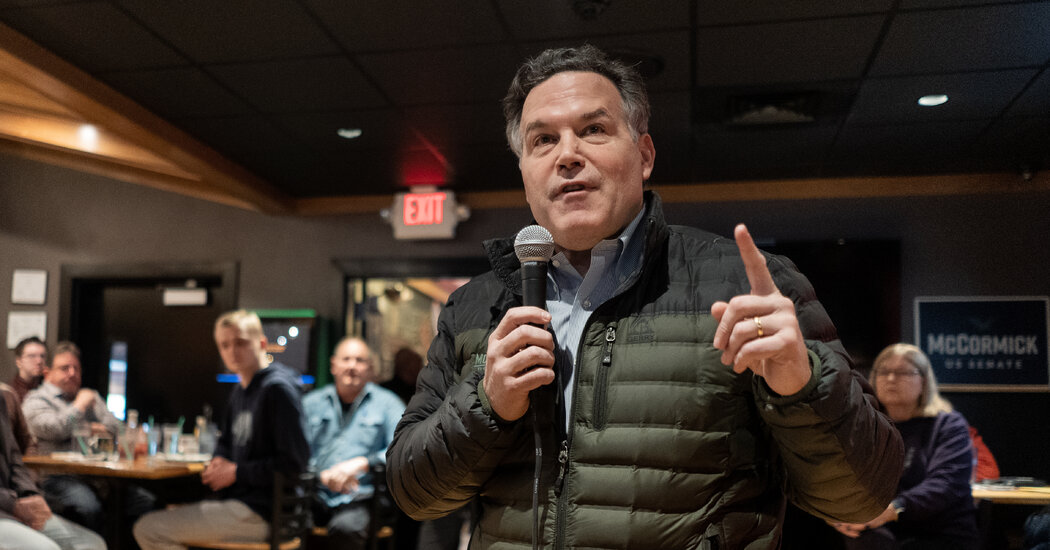 Before he entered Pennsylvania’s Senate race, David McCormick oversaw a giant hedge fund that invested billions of dollars for the retirement plans of the state’s teachers.

But Mr. McCormick’s company, Bridgewater Associates, delivered such middling profits and charged such high fees that the Pennsylvania teachers’ retirement fund moved to sell off its Bridgewater holdings beginning two years ago.

Overall, Bridgewater’s performance was a contributing factor in nearly a decade of poor returns for the retirement fund, trustees of the fund said in interviews.

The impact is now being felt indirectly by thousands of teachers who have to pay more from their paychecks to fund their retirements, an extra $300 annually in some cases.

Since jumping into the Republican primary in January, Mr. McCormick has offered his business career as a qualification for the open Senate seat in November, but he has made little mention of his connection to the state’s teacher pension fund, which has long been mired in controversy, nor to the more than $500 million in fees that Bridgewater was paid by the fund.

But on Tuesday, Mr. McCormick’s chief Republican rival, the celebrity doctor Mehmet Oz, sought to use those high fees and Mr. McCormick’s decade on top of Bridgewater, the world’s largest hedge fund, against him.

“We’re stuck with a half-a-billion-dollar bill while he and his colleagues got half a billion in fees,” Dr. Oz said outside the Harrisburg headquarters of the pension fund, the Public School Employees Retirement System, known as PSERS. He addressed a small group of supporters with a large prop check made out for $500 million.

“The fact that no one knows this story,” he added, is “shameful.”

Until 2019, the retirement fund had nearly $5 billion invested with Bridgewater, among the most of any firm, and it was one of the hedge fund’s top clients.

In response to Dr. Oz, the McCormick campaign said that Bridgewater had made plenty of money for the retirement fund and that Mr. McCormick, who served as president and later as chief executive of the hedge fund, was not directly involved in overseeing its relationship or investments with PSERS.

The dispute is the latest round in a slugfest between Mr. McCormick and Dr. Oz, whose primary contest will help shape one of the most crucial races this year for control of the Senate. The two candidates and their outside supporters have already spent a state record $30 million in attack ads ahead of the May 17 primary. A Fox News poll this month of potential Republican voters showed Mr. McCormick on top of a five-person field, although many voters are undecided.

The Pennsylvania teachers’ pension fund has been troubled for years. Besides hedge funds, it put its money into highly risky “alternative” investments including trailer park chains, pistachio farms and pay phone systems for prison inmates.

In mid-2020, the fund’s annual profits over nine years, a decade when the stock market boomed, amounted to just 6.34 percent, missing a target set by Pennsylvania law.

The shortfall prompted $80 million in higher paycheck deductions for about 100,000 teachers and other school employees, as well as higher property taxes for homeowners statewide, to pay for school districts’ makeup contributions to the pension fund, said Stacy Garrity, the state treasurer.

Mr. McCormick, who declined to be interviewed, said through a campaign spokeswoman that PSERS’s poor performance was not the fault of its Bridgewater holdings — as Dr. Oz argued — and that those holdings had earned money for the pension fund. “Pennsylvania retirees made $3.9 billion in net profits and did not lose a penny over the life of the relationship under Bridgewater management,” the spokeswoman, Jess Szymanski, said.

In the most recent quarterly reporting period, PSERS’s largest Bridgewater investment, the Pure Alpha II fund, underperformed a benchmark for comparable funds over the preceding three-, five- and 10-year periods. It exceeded the benchmark over a one-year period.

More important than the individual Bridgewater investments, according to board members, was that Bridgewater’s investment philosophy came to dominate the retirement fund’s broad portfolio, currently valued at more than $72 billion.

At a July 2020 meeting with senior retirement fund staff members, Joseph Torsella, the state treasurer at the time, criticized Bridgewater’s poor performance and its wide influence over the pension fund.

Bridgewater, which manages about $140 billion, largely for institutional clients, is known as much for a culture in which employees bluntly air their differences as it is known for its investing record. It boasts of earning customers tens of billions of dollars over four decades.

Its founder, Ray Dalio, is a multibillionaire who popularized an investing strategy known as “risk parity.” It promises to make money in both good and bad economic times by placing bets across different types of assets such as gold, Treasury bonds and sovereign wealth funds.

During the 2008 financial crisis, when stocks went into a free-fall, Bridgewater’s Pure Alpha fund gained 9.5 percent. That was the start of an infatuation with Bridgewater by the professional staff at the Pennsylvania teachers’ fund, according to board members and their aides.

Walloped by its declining stock holdings, the retirement fund embraced the risk parity model. It not only loaded up on Bridgewater’s own funds, it molded itself into a Bridgewater-like hedge fund.

A report for the Pennsylvania legislature in 2018 found that PSERS’s portfolio allocation “reflects a risk parity model.”

It was a highly unusual, and risky, approach for a public fund that sends monthly checks to 250,000 former teachers, custodians and other school employees.

“The real impact of Bridgewater on PSERS was not just that Bridgewater was one among a couple of hundred managers — they were the guru,” said Mr. Torsella, who was part of a bipartisan group of board members who began challenging the way the pension fund was run. “Too many of the investment team at PSERS became acolytes of Bridgewater. There was too much deference to their way of thinking.”

Certainly, no one at Bridgewater was twisting the arms of PSERS’s staff to imitate the hedge fund’s strategy.

Still, teams of retirement fund staff members trooped to Bridgewater’s wooded campus in Westport, Conn., or hosted Bridgewater consultants in Harrisburg for daylong seminars. In 2019, top pension fund executives flew to China for two Bridgewater events, including a weeklong “investor summit,” at a cost of $4,467 in travel.

Over the decade following the financial crisis, as the stock market recovered and boomed, PSERS’s embrace of a risk parity model of investing had a disastrous impact on the pension fund’s bottom line. As of 2018, the retirement fund’s returns over a decade ranked 50th out of 52 public pension plans nationwide, according to the report for state lawmakers.

Although Bridgewater’s funds were promoted as a way to weather a bear market in stocks, the arrival of the pandemic in 2020 proved that the complex financial straddles didn’t live up to the hype. Bridgewater’s Pure Alpha fund was underwater for the year, even as the S&P 500, the broad stock market index, gained more than 16 percent.

The dissidents on the PSERS board, who favored a plain-vanilla portfolio of largely public stocks and bonds, succeeded in pushing the pension fund to sell off two of its Bridgewater funds, All Weather and Optimal, and to eventually liquidate all of its hedge fund investments.

In July 2021, the pension fund was forced to increase paycheck deductions for 94,400 school employees hired since 2011.

Samantha Kreda, who teaches special education to third to fifth graders at the Richard R. Wright School in Philadelphia, was one.

“The PSERS increase amounted to $30 every paycheck, but that’s a huge amount of money considering all the things teachers are expected to pay for,” she said. She buys books, snacks, birthday gifts and school supplies out of her pocket for students in her high-poverty school. Rather than cut back on those extras, she said, she has reconsidered “splurges” like dinner out with her boyfriend.

Ms. Kreda, 27, who has a master’s degree from the University of Pennsylvania, knows Ivy League peers who went into law or finance and now make “unfathomable” salaries. “I love my job; I don’t teach for the paycheck,” she said. Still, a $30 deduction from her biweekly pay gives her pause. “It definitely makes a difference,” she said.