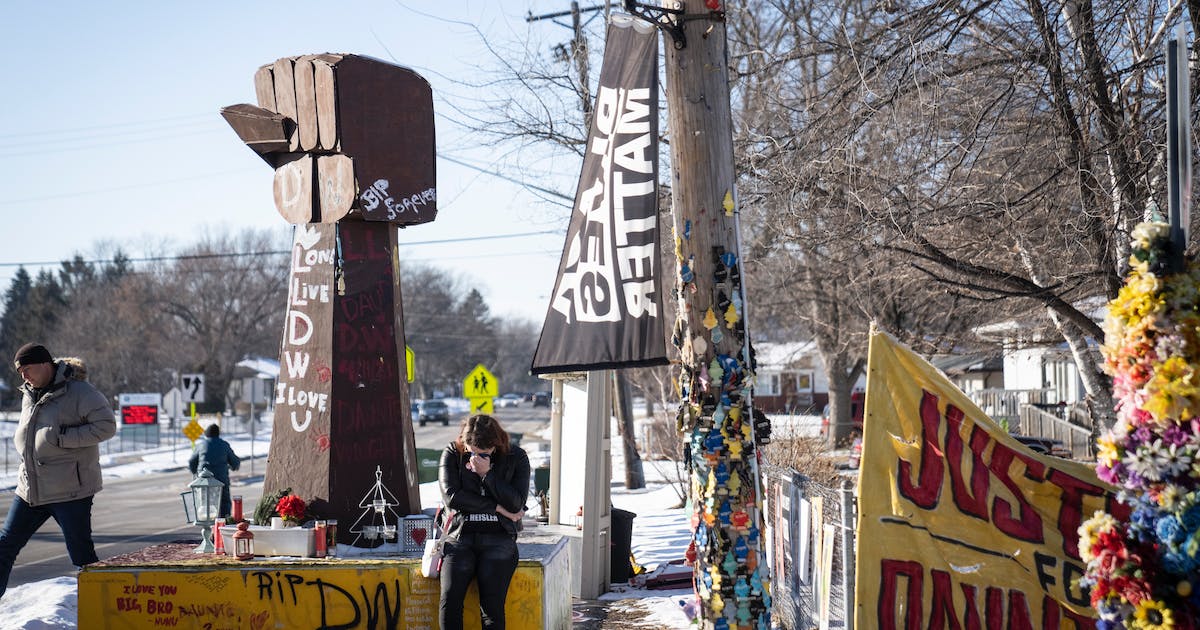 With the anniversary of the fatal police shooting of Daunte Wright approaching, Brooklyn Center officials have informed the family that the memorial erected at the intersection where the 20-year-old was killed would be taken down.

But now those plans are on hold and Wright’s parents will meet with city staff on Tuesday to come up with a solution that meets the needs of the community and family.

“Leave the memorial because it’s honestly not hurting anybody but it will hurt a lot of people taking it down,” said mother Katie Wright in an interview Sunday.

Wright said that she and her husband, Aubrey, along with the family’s attorney, Jeff Storms, will meet with City Manager Reggie Edwards and City Attorney Troy Gilchrist on Tuesday after Edwards informed them of plans to take the tribute down.

Edwards wrote in an e-mail March 11 — one month before the April 11 anniversary and nearly a month after former officer Kimberly Potter was sentenced to 16 months for the fatal shooting — that they “anticipate reopening the sidewalk/trail at 63rd and Kathrene early next week.”

He mentioned a few options about preserving the material at the memorial, saying the city could store them or asked whether memorial volunteers would want to gather and archive the material.

When asked by the Star Tribune, Edwards wrote in an e-mail: “We are working through the issue of memorials. There will be not be any movement on the memorial in the coming week.” Edwards and Mayor Mike Elliott did not respond to additional requests for comment.

The city is interested in partnering with the family and memorial volunteers for a celebration on the anniversary, Katie Wright said, adding that Elliott has been supportive and “leading with his heart and doing what is right.” The venue of the celebration that weekend is to be determined, but there will be a candlelight vigil April 11 at the memorial.

In his e-mail communication with the family and memorial volunteers, Edwards said that Brooklyn Center “is committed to developing a permanent memorial in memory of Daunte.”

But Katie Wright said other proposed locations for a permanent memorial aren’t at the intersection where her son was killed. They’ve suggested a park nearby, but she said that’s not as visible as 63rd Avenue, a main commute in Brooklyn Center, and also placing a memorial bench in front of the police station.

“If they want to not have memorials on their street corners they need to stop murdering our loved ones on street corners,” she said.

Wright said while she’s grateful for the discussion and ideas to honor the family and Daunte Wright’s legacy, the place where her son was killed cannot be erased.

“As a family, we want people to remember what happened there. I don’t want it to go away. Once it goes away, it’s forgotten about, it didn’t happen,” she said. “It’s so easy for history to be erased when it’s not right in front of our faces.”

She said the concern about the memorial is a statue of a large brown fist blocking the sidewalk. There is a walking path on the grass to go around it in the warmer months, but that’s not accessible during the winter because of snow.

The fist is originally from George Floyd Square, the memorial at the intersection of 38th Street and Chicago Avenue in south Minneapolis where George Floyd was killed by police. Like that protest site still occupied two years later, the Daunte Wright memorial features artwork, mementos and raised vegetable beds open for anyone to take a tomato or cucumber.

Wright said she is hopeful that they can reach a resolution that keeps the memorial where it’s always been because the location means something to her family. She said she will sit for hours where her son’s body lay on April 11. Her children go there to decompress and talk to their brother.

“It’s a sad space but at the same time it’s a comforting space because I truly feel Daunte when we are there,” she said.

The memorial is not disruptive to the community, she said, adding that she always asks neighbors in the immediate area of the memorial about making changes and hosting events. She said while it’s a part of protesting and activism, it’s not destructive and she is willing to work with the city on making the sidewalk more accessible.

“We’re maintaining a very beautiful statement of a life that was lost, my son’s life,” she said.

There have been times when protesters have threatened to shut down the intersection and Wright said she has told them no. But she said if the city moves forward with plans to dismantle the memorial, she will put up a tent and sleep there to prevent that from happening.

“We’ve had to fight so hard from beginning to — is there an end? I wish there would be,” she said.