Darren Bailey Will Be the Republican Nominee for Illinois Governor 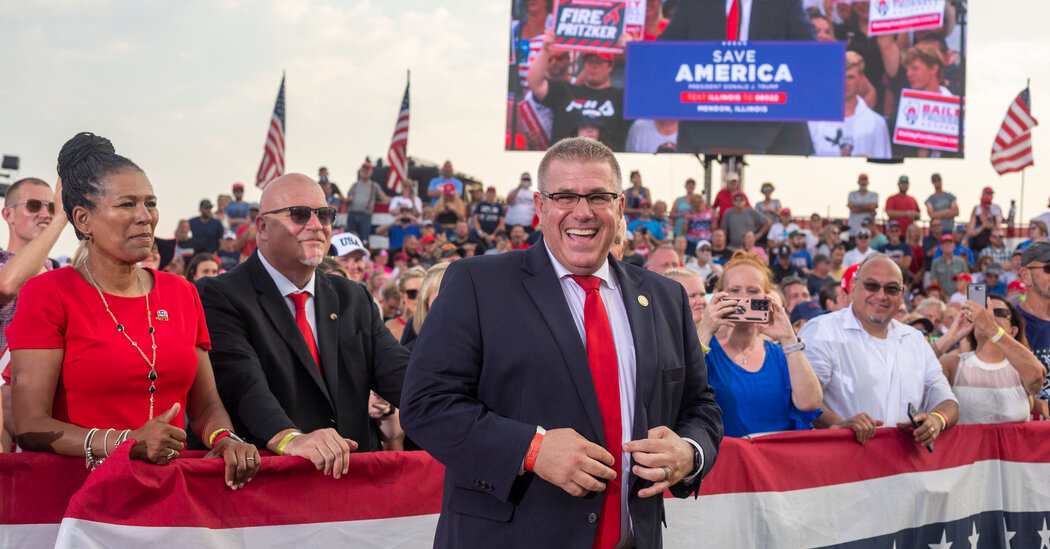 PEORIA, Ill. — Darren Bailey, a far-right state senator who was the beneficiary of an extraordinary effort by Democrats to help his candidacy, has won the Republican primary for governor in Illinois.

Mr. Bailey, whose crushing victory was called by The Associated Press on Tuesday, topped a field of five other Republicans in the contest to oppose Gov. J.B. Pritzker, a billionaire Democrat who invested $35 million to influence the G.O.P. primary.

The Illinois governor’s race is on track to become the most expensive campaign for a nonpresidential office in American history. More than $100 million has been spent on television advertising in the primary.

A farmer from Southern Illinois who was endorsed by former President Donald J. Trump at a rally on Saturday, Mr. Bailey was virtually unknown in state politics before he upset a Republican incumbent in a 2018 primary for a State House district.

One of his first legislative proposals once in office was a bill to remove Chicago from the state. When the pandemic began, he refused to wear a mask during legislative sessions and sued Mr. Pritzker to block public health mitigation efforts.

In 2020, Mr. Bailey advanced to the State Senate, where he and a few other conservative legislators from Southern and southeastern Illinois are collectively known as “the Eastern Bloc.”

Mr. Bailey, 56, began his campaign for governor in February 2021, a month into his State Senate tenure. He has spent the last 16 months barnstorming the state’s Republican precincts.

In that time, he gathered sufficient support from conservative voters aligned with Mr. Trump to survive a $50 million primary campaign from Mayor Richard C. Irvin of Aurora, who was backed by the hedge fund executive Kenneth Griffin, and a $12.6 million campaign from Jesse Sullivan, a Silicon Valley venture capitalist who relocated to Petersburg, his Central Illinois hometown, to run for governor.

Mr. Bailey had two patrons in the primary: Mr. Pritzker, whose relentless advertising campaign bashed Mr. Irvin while highlighting Mr. Bailey’s conservative credentials, and Richard Uihlein, the Chicago-area megadonor who has supported an array of far-right Republican candidates. Mr. Uihlein has spent $17 million so far on Mr. Bailey’s campaign and on a political action committee that attacked Mr. Irvin.

Mr. Pritzker will now be a heavy favorite to win the general election against Mr. Bailey. Had Mr. Irvin, a moderate with an inspiring personal story, no ties to Mr. Trump and access to hundreds of millions more dollars, advanced, the race was expected to be highly competitive in November.

In an interview last week in Green Valley, Ill., Mr. Bailey expressed confidence that he would be competitive with Mr. Pritzker in a general election even though Mr. Trump lost Illinois by 17 percentage points.

“Life is different now under Joe Biden, and especially with J.B. Pritzker,” Mr. Bailey said. “Life’s a lot different now for Illinois than it was then. And I think people realize that.”