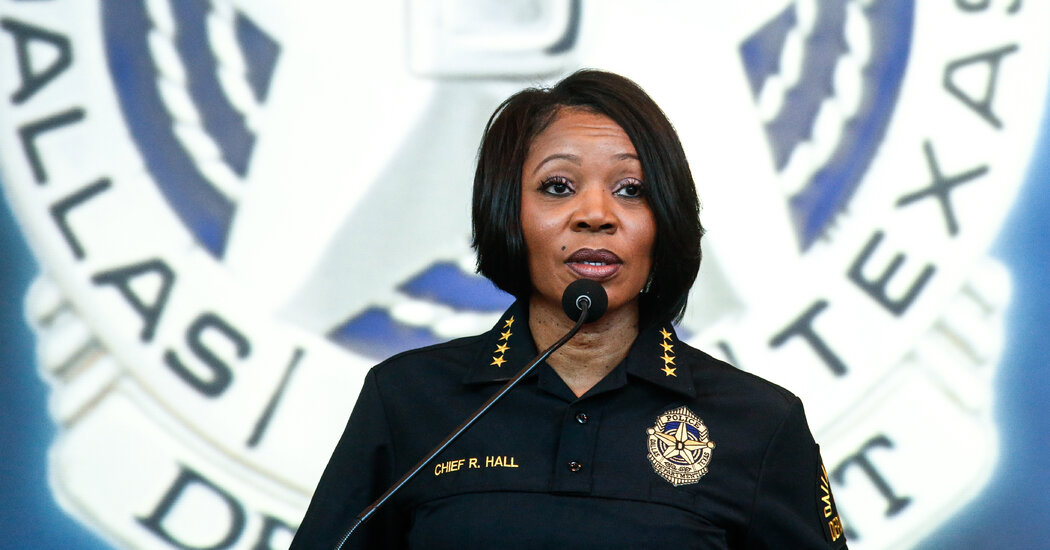 AUSTIN, Texas — U. Reneé Hall, the police chief in Dallas, abruptly announced her resignation on Tuesday amid eroding support on the City Council stemming from her department’s handling of protests over the policing of African-Americans.

Her resignation, which becomes effective on Nov. 10, follows a wave of police chief resignations in other cities during a tumultuous summer that has brought intense scrutiny on American law enforcement.

Chief Hall, who is African-American, is the first woman to lead the Dallas department and has held the position since 2017.

In her resignation letter to the Dallas city manager, T.C. Broadnax, Chief Hall expressed gratitude for serving in the post but acknowledged that she had faced challenges in recent months.

“It has not been easy,” she said, while declaring that much had been accomplished “by standing together in support of community policing and changes in the way our officers perform their duties in 2020.”

City Council members delivered a sharp critique of her leadership during widespread protests in Dallas following George Floyd’s death at the hands of Minneapolis police officers in May.

She gave herself a C-minus when council members asked her to assess her performance in handling the situation, and her report on the department’s actions during the protests found problems with operational plans, communications and maintaining a unified command structure.

Some council members found fault with the fact that the report emphasized protesters who targeted the police with violence but failed to discuss some of the harsh measures employed by officers against the demonstrators.

Several police chiefs around the country have resigned or been fired in recent months as cities reassess their police departments’ treatment of African-Americans and Latinos and the use of tear gas, pepper spray and other measures in seeking to control public protests.

Police chiefs in Seattle, Atlanta, Louisville and Tucson, Ariz., are among those who have departed. On Tuesday, the police chief in Rochester, N.Y., and several of his department’s highest-ranking officials resigned in the aftermath of the death of Daniel Prude, a Black man who suffocated after he had been placed in a hood by city police officers and pinned to the ground.

When Ms. Hall took the Dallas job, after serving as deputy police chief in Detroit, she noted that she had served in a city that faced challenges over budgeting and policing and had managed to overcome many of them. She said she had overseen similar strides in Dallas as her tenure there was coming to an end.

“I am proud that this department has not only coped with an unthinkable series of events, but we have also managed to implement critical reforms that were clearly needed for the Dallas Police Department to meet our 21st-century policing goals,” she said in her resignation letter.

The chief also disclosed that she had “received a number of inquiries about future career opportunities” but declined to discuss her future plans.

Ms. Hall’s tenure had been increasingly rocky in recent months as city officials focused both on her handling of the protests and on crime that has continued to soar despite her introduction of a “crime reduction plan” at the beginning of the year.

In August, the deputy mayor pro tem, Adam McGough, bluntly complained of a “failure of leadership” in the police department during the protests.

Much of the criticism focused on Chief Hall’s response to a night of demonstrations on Margaret Hunt Hill Bridge just west of downtown Dallas. The chief initially said that hundreds of people would be arrested and charged with misdemeanors but eventually backed away from the threat of arrests. She also initially denied that tear gas had been used, later acknowledging that it was.