COVID Has Made Global Inequality Much Worse 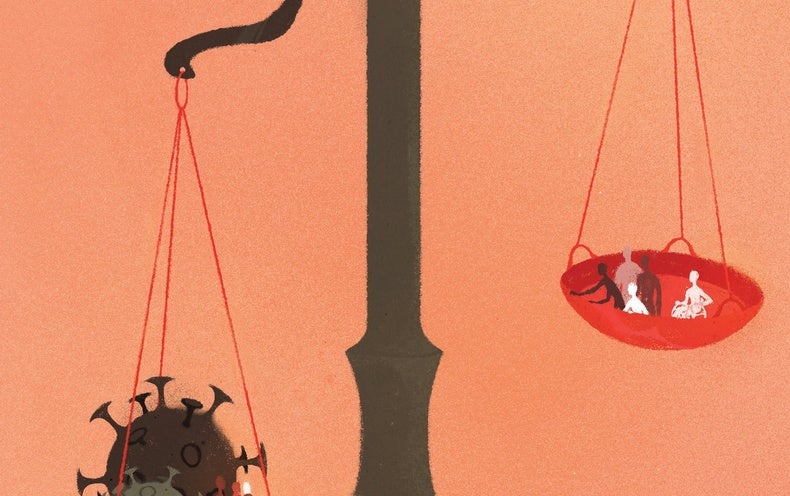 The coronavirus exposed and exacerbated the fragility and inequity of the global economic system. Many countries, including the U.S., proved unable to manufacture simple products such as face masks, let alone more complicated ones such as ventilators. Multiple supply chains broke. The resulting ordeal will almost surely lead to the creation of more onshore production facilities. An ugly nationalism displayed by countries that have hoarded vaccines and put profits over lives shows no sign of abating, despite its potentially devastating consequences for the world.

The pandemic’s most significant outcome will be a worsening of inequality, both within the U.S. and between developed and developing countries. Global billionaire wealth grew by $4.4 trillion between 2020 and 2021, and at the same time more than 100 million people fell below the poverty line. Just how bad the situation will become depends on how long the disease rages and what policy makers do to control it and its consequences.

In part because of its huge income and wealth inequalities, the U.S. suffered the most COVID-attributed deaths of any country. SARS-CoV-2 went after those with poverty-related health conditions and with jobs that cannot be done in isolation. Surviving from paycheck to paycheck and not having even the most basic rights of health care and paid sick leave, many Americans lacked testing to know if they were infected and either went to work, spreading the virus, or sought help too late.

The poorest will also suffer the most from the pandemic’s economic aftermath—in particular, from the loss of jobs, disproportionately concentrated in low-wage service sectors. Just as worrisome, poorer children have experienced terrible educational setbacks as schools moved online, presaging a potentially long-term aggravation of inequality and deprivation.

Still, a strong policy response in the U.S. has created a shallower economic downturn than elsewhere. President Joe Biden’s American Rescue Plan reduced childhood poverty in 2021 by more than a third, demonstrating that the country’s high level of poverty has always been a matter of choice. But the measures taken so far are temporary palliatives. The Build Back Better plan was designed to make these achievements more permanent and to reduce inequality in all its dimensions. If it fails to pass, we can expect an enduring increase in poverty. Matters will almost surely get even worse if the pandemic continues.

It was a triumph of scientific, political and economic organization that we were able to so quickly develop, produce and distribute billions of vaccine doses. But matching these enormous successes are colossal failures. Despite having the technology and the resources, we have failed to ramp up vaccine supply and distribute enough doses in poor countries.

Markets can solve most economic problems—a shortage of glass vials, for example. They cannot, however, overcome the legal barriers presented by intellectual-property rights that have given the current producers of vaccines monopoly power. Those pharmaceutical companies have an incentive to restrict manufacturing, allowing them to charge prices that are a multiple of the cost of production—although most of the original R&D, and even much of the initial productive capacity, was publicly financed.

The failure to bring the disease under control and the unequal burden of the disease are thus largely a failure of our economic and political systems. Had the vaccine intellectual-property waiver, which would allow any firm in the world to produce the vaccines after paying a fair royalty, been adopted when it was first proposed more than a year ago, we would almost surely have far greater supplies today. Hope may have arrived in the form of CORBEVAX, a vaccine that has no patent restrictions and is easy to make, circumventing national selfishness and corporate greed. If it proves sufficiently safe and effective, it could get the world inoculated, reducing the likelihood of a more deadly, more contagious or vaccine-resistant mutation.

The global inequities in vaccine distribution are matched by glaring inequities in responses to the economic downturn. Whereas the U.S. has spent a quarter of its gross domestic product (GDP) to keep the economy going, poor countries could spend but a mere fraction of that amount. Some countries have seen a drop in GDP of 10 percent or more, with especially adverse effects on the poorest. And although the U.S. can manage the large increase in debt, poor countries will find it difficult to do so.

Unfortunately, then, the economic shock of the pandemic most likely will linger. It will be those at the bottom—poorer Americans and most people in poorer countries—who will still suffer the consequences years from now. Not doing everything we can to control the disease and its economic aftermath everywhere is shortsighted. Dithering and dawdling will allow COVID to rage on, with further supply chain disruptions contributing to shortages, postponing a robust global recovery and entrenching unconscionable levels of inequality.