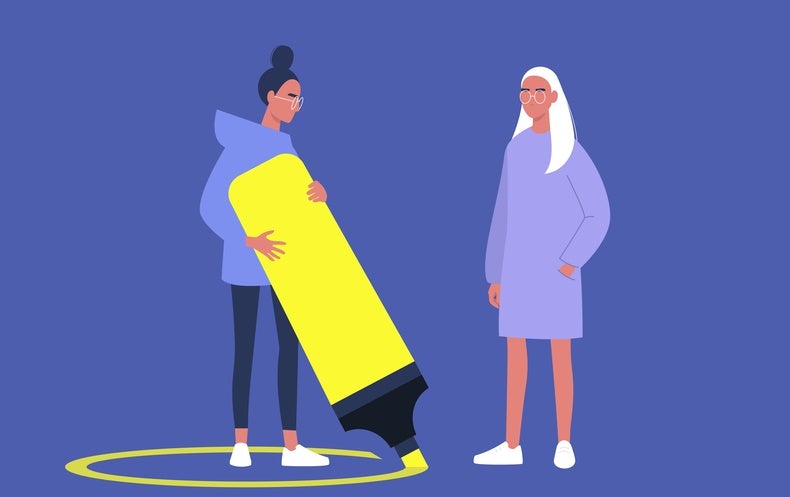 The stop distance procedure is simple: A researcher moves toward a study participant. When the approaching person gets too close, the volunteer says, “Stop.” The task is straightforward. But it is also quite effective at probing the dimensions of a person’s physical comfort zone, or “personal space.”

This procedure was integral to a preprint study that was conducted at Massachusetts General Hospital to test changing perceptions of personal safety zones before and during the COVID-19 pandemic. The researchers took advantage of baseline statistics they had gathered from 19 people prior to the pandemic. The team compared them with data collected from a dozen of those subjects after the outbreak began and found personal boundaries had expanded by 50 percent or more by one measure. This marked the broadening of a safety zone—a natural, instinctual one that differs from the six-foot distancing guideline from public-health officials.

The study is small, but it is part of a growing body of social science work trying to gauge long-term mental health effects of the pandemic. Researchers are curious about whether changes to our comfort zone of personal space will persist and whether this zone might vary from place to place. Does its observed size hold in rural Mississippi as well as the Boston area, where the study was conducted?

Scientific American talked with the study’s lead researcher Daphne Holt, an associate professor of psychiatry at Harvard Medical School and Massachusetts General Hospital, who has extensive experience in trying to understand how people establish a surrounding space that they can claim as their own. She talked about her recent study as a preliminary step toward new research her group plans to undertake to assess COVID’s ongoing psychological impact.

How did you got involved with this research?

I’ve been interested in personal space for quite a while. My group studies some of the automatic behaviors that represent the building blocks of social interactions, the very basic things that we do instinctually and automatically. One of these instinctual behaviors is the way we define personal space.

I am a psychiatrist. And the illness that I’ve been studying for most of my career is schizophrenia. And it turns out that people who have schizophrenia sometimes display abnormal personal spacing. They often stand far away from other people. And we’ve found that this enlargement of personal space in schizophrenia is related to some impairments in social functioning. It sounds circular in a way: you are less interested in being around other people, and so you stand farther away from them.

For everyone, there are tiny variations in personal space depending on how well you know someone. We all have this comfort zone where, if somebody intrudes, we begin to feel uncomfortable. Culture definitely influences personal space. Social hierarchy has an influence, but it turns out that if you control for all those factors—and we can do that in the laboratory—people have a fairly consistent personal space preference. It’s surprisingly stable; it doesn’t really change over time. We’re very interested in understanding the brain mechanisms that govern that behavior. And we’ve done studies of it using very high-resolution functional magnetic resonance imaging [fMRI].

What have you found?

We’ve discovered that the responses to personal space intrusions show an interesting pattern in terms of how they are physically arranged in the brain. We found that there are “columns” of activation, which are essentially thin stacks of simultaneously activated cortex extending from the middle to the outer surface of the brain, within one part of the parietal cortex. These columns respond to stimuli that are located within, but not beyond, the boundaries of personal space. That’s been really exciting because it gives us clues as to how basic sensory information is used to calculate the distance that we prefer to stand from other people.

Have you used other methods?

We also use conventional methods, including the stop distance procedure, in which a study staff member approaches a participant in the study until that person says to stop. We’re trying to understand the pattern of responses to personal space intrusions—what we call the “shape” of the responses. This is something that is not really fully understood.

We have also used virtual reality [VR]. An avatar will approach the subject, or the subject will approach the avatar in a virtual reality environment. And it turns out that people have a very similar personal space response to an avatar as to a real person. The responses are essentially identical, even though the avatars don’t look much like real people. Avatars can look generally similar to real people in the way a three-dimensional animated character can, but they are rudimentary enough so that they can be immediately distinguished from actual humans.

The reason we decided to use virtual reality was, in part, because our work could then be easily moved into the [fMRI] scanner. But the main reason is that personal space measurements are affected by the physical characteristics of the people involved with the research. For example, if you’re interacting with a taller person, you’re going to stand farther away from them. So if you’re using real people in these measurements, you’re going to have some extra noise in the results that’s related to these different physical characteristics. But virtual reality allows you to perfectly control for all these variables and to study their contributions. For example, varying the position or the length of an avatar’s arm or engaging in eye contact with an avatar can tell you how those things affect personal space.

You were studying a group of people to understand how they deal with personal space. And then COVID came along, which led you to test whether their notion of personal space had changed.

It did seem like an obvious question. We were all suddenly being asked to practice this behavior—social distancing—that’s fairly unnatural. We had to stand at least six feet away from other people. A typical personal space size ranges from 60 to 100 centimeters (about two to [3.3] feet), depending on the circumstance.

Social distancing as a public health measure is very deliberate, but the normal way we distance ourselves from another person is mostly unconscious. So the question was: How were the public health norms affecting our instinctual personal space boundaries? With virtual reality, we had this opportunity to actually study questions related to personal space in a virus-free, safe context.

What did you discover?

In all of the measurements we did, we found a significant increase in personal space during the pandemic, compared with the same measurements in the same people collected before the pandemic. We saw this even in response to avatars. So it was clearly not because of an immediate risk or danger of infection.

How much did personal space perimeters increase?

Out of a total of 19 participants, 12 people completed all of the assessments, including virtual reality sessions, before and during the pandemic. For those who were assessed both times, there was a 40 to 50 percent increase or more in the size of personal space, compared with before the pandemic, when it was 80 to 90 centimeters [about 2.6 to three feet] for one of the measurements we took. It’s now about 125 centimeters [4.1 feet] on average.

So are you going to do larger trials related to personal spacing?

We have a National Institutes of Health grant to support a collaboration with some engineers at the University of Massachusetts Amherst who have developed a wearable sensor that can measure distances from other people using sound waves. The way that the sound bounces off of the other objects in the room can tell us whether the person is standing next to a living thing versus an inanimate object. We can actually measure personal space in real time with the sensor.

This study was planned before COVID to measure personal space in people with schizophrenia, but we’re talking about using the technology to also study people’s recovery from the pandemic and whether some of the persistent effects of it on people’s social behaviors can be measured using this method. Ultimately we want to be able to identify the people who need help during this phase of the crisis.

As a psychiatrist, are you worried that these effects could, in fact, be long-lasting?

Yes, I think that we’re already seeing post-traumatic stress symptoms in some people and that some are more vulnerable than others to the psychological effects of this society-wide trauma. I think it’s likely that some people will have more trouble readjusting to whatever the new normal is. We may be able to use objective markers of social behavior, such as measurements of personal space, to identify people who needs additional support.

We’ve also developed a VR-based intervention, essentially a course or workshop, that is designed to help people recover from the pandemic. It helps build resilience by teaching techniques that may help people to handle stress and challenging experiences or social interactions in their daily lives. But it also targets the changes that have occurred in personal space.

Are we entering a new phase that approximates the much trumpeted “new normal”?

It may be that we never revert back to our previous ways of being in the world. In the case of personal space, it may affect things like how we design office spaces, our homes, restaurants or elevators. Those things may have to change if people are persistently needing a little bit more distance from others.