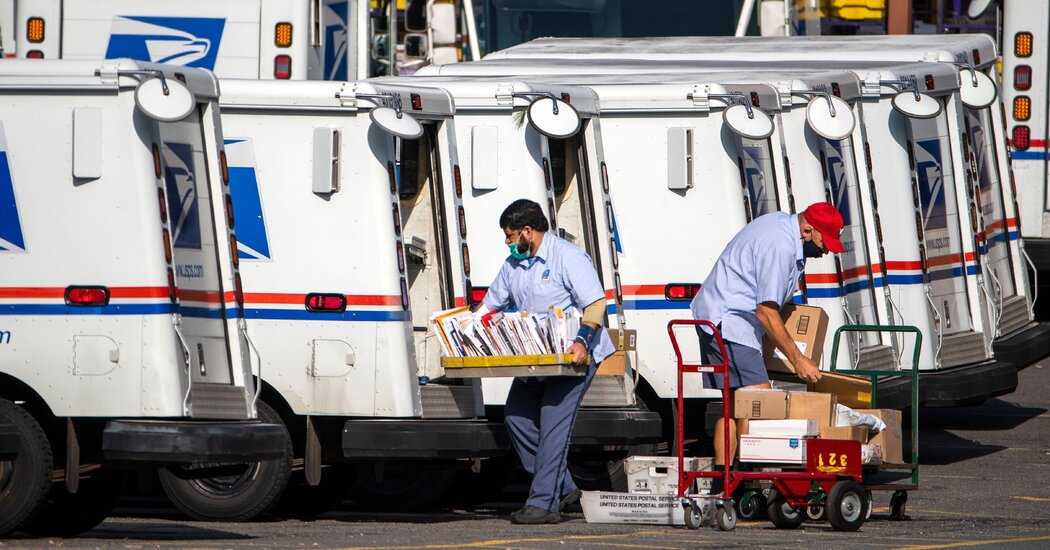 WASHINGTON — The House interrupted its annual summer recess on Saturday for a rare weekend session to consider legislation blocking cost-cutting and operational changes at the Postal Service that Democrats, civil rights advocates and some Republicans fear could jeopardize mail-in ballots this fall.

The measure, put forward by Democratic leaders, would also require the Postal Service to prioritize the delivery of all election-related mail and grant the beleaguered agency a rare $25 billion infusion to cover revenue lost because of the coronavirus pandemic and ensure it has the resources to address what is expected to be the largest vote-by-mail operation in the nation’s history.

Democrats framed Saturday’s action as an emergency intervention into the affairs of an independent agency to protect vital mail and package services that have seen significant delays this summer as the new postmaster general, Louis DeJoy, moved swiftly to cut costs to close a yawning budget gap. They said it was also necessary to instill confidence in American voters that the agency would safeguard their ballots despite near daily attacks by President Trump on mail-in voting.

“This is not a partisan issue,” Representative Carolyn B. Maloney, Democrat of New York and the lead author of the bill, said before the session. “It makes absolutely no sense to impose these kinds of dangerous cuts in the middle of a pandemic and just months before the elections in November.”

Lawmakers are expected to approve it on Saturday afternoon with nearly all Democratic votes, but the bill, as written, appeared unlikely to move through the Republican-controlled Senate. The White House pledged a veto because administration officials see the bill as overly prescriptive and costly.

Most Republicans in the House were expected to oppose it after Mr. DeJoy, facing intense backlash and with the House vote looming, announced this week that he would temporarily halt the removal of blue mailboxes and sorting machines, as well as changes to post office hours and to mail delivery operations until after Nov. 3 out of an abundance of caution.

In testimony before the Senate on Friday, Mr. DeJoy reiterated that pledge and said ensuring successful mail-in voting would be the agency’s “No. 1 priority.” He called Democrats’ assertion that he was working with Mr. Trump to hinder the program “outrageous” and testified that he planned to continue the agency’s practice of prioritizing election mail.

He is scheduled to testify again on Monday before the House Committee on Oversight and Reform.

The decision to intrude on Congress’ sacrosanct summer recess and call lawmakers back to the Capitol underscored just how high the political and electoral stakes have become around the operations of a usually humdrum federal service, especially in the eyes of Democrats. Even if it does not become law, they reason, the vote will help elevate the issue in the eyes of regular Americans and further tarnish Mr. Trump.

Postal leaders have been warning for months that the sharp decline in mail caused by the pandemic could jeopardize the solvency of an agency that has struggled to turn a profit. But when Mr. DeJoy, a Trump donor and former logistics executive, introduced measures to cut down on transportation costs and overtime this summer — leading to substantial delivery delays of vital items like medicines, checks and even live chicks — Democrats and postal unions began to warn that the Trump administration may be moving to destabilize the Postal Service during an election year and aid its private competitors.

Mr. Trump has repeatedly derided the Postal Service as a “joke” and spent months railing against mail-in voting with false claims about ballot safety and fraud.

Adding to their worries, the changes coincided with the long-planned removal of hundreds of blue postal collection boxes across the country and the decommissioning of mail-sorting machines, part of a regular practice to adjust to the steady decline of mail.

Republican lawmakers whose districts rely heavily on the mail for vital services have joined Democrats in voicing concern over the slowdowns and demanding assurances from Mr. DeJoy and others that the Postal Service will be able to carry out the vote-by-mail initiatives.

But after Mr. DeJoy’s reversal and presentation at a hearing before a Senate panel on Friday, they said they were satisfied and accused Democrats of continuing to fan hyperbolic and unsupported theories of a conspiracy overseen by Mr. Trump to sabotage the election for their own political gain.

“Democrats have fabricated a baseless conspiracy theory about the Postal Service and now they are asking American taxpayers to foot the bill for their fake crisis,” said Representative James Comer of Kentucky, the top Republican on the oversight panel.

Mr. Comer accused Democrats of trying to “sow fear about the integrity of the election and provide trial lawyers with a litigation loophole to sue the Postal Service if President Trump is re-elected by the American people.”

Many Senate Republicans — including moderate senators facing tough races in November — are supportive of granting the agency a direct appropriation, albeit with some policy stipulations to address its long-term business model. Congress provided $10 billion in loan authority for the agency this spring, as well, that it has yet to tap.

But Senator Mitch McConnell of Kentucky, the majority leader, has signaled he is not interested in bringing up a stand-alone bill in the Senate — much less one that would dictate how the Postal Service operates.

“This is a nonexistent problem. It’s going to be taken care of,” Mr. McConnell said of mail-in voting concerns while campaigning in Kentucky this week.

The Democratic legislation would be an extraordinary intervention if it became law. Though it is a government entity explicitly mentioned in the Constitution, the modern Postal Service functions as a self-sustaining business that raises funds through postal products, not from taxpayers.

Democrats’ $25 billion comes with no strings attached, but their bill would effectively bar Postal Service leaders from making any service or operations changes that “impede prompt, reliable, and efficient service” through at least January. It would reverse changes already put in place.

The effect could last much longer. By imposing strict requirements until the end of the pandemic, it would, if approved, also effectively block the postmaster general from making more sweeping changes he has planned after Election Day to raise prices, potentially limit service to rural areas and consolidate the agency’s footprint — measures Democrats generally oppose.

The $25 billion in direct funds match a request the Postal Service made of Congress this spring to cover lost revenue.

Mr. DeJoy and the Postal Service remain supportive of a direct grant from Congress, but he opposes the restrictions that Democrats’ bill would impose on his leadership team. On Friday, he urged lawmakers to come together on bipartisan legislation that could address the agency’s longer-term financial woes by unburdening it from a costly requirement to prefund retiree benefits that has put it tens of billions of dollars in the red.

Even a short-term infusion of cash has become tied up in larger political and policy fights over how to respond to the pandemic.

Lawmakers had hoped to reach bipartisan consensus on a huge relief bill — including around $10 billion for the Postal Service — before they left town for their recess, but talks reached a stalemate over cost.

Mr. McConnell expressed some optimism in recent days that the intense interest in the postal issue could present a new negotiating opportunity to draft a smaller, short-term bill to circumvent the impasse — an idea Democrats have so far opposed.

Democratic leaders had also been under pressure from more than 100 rank-and-file lawmakers to use Saturday’s session to address other elements of the coronavirus relief negotiations as well. But they decided to narrow in just on the Postal Service.