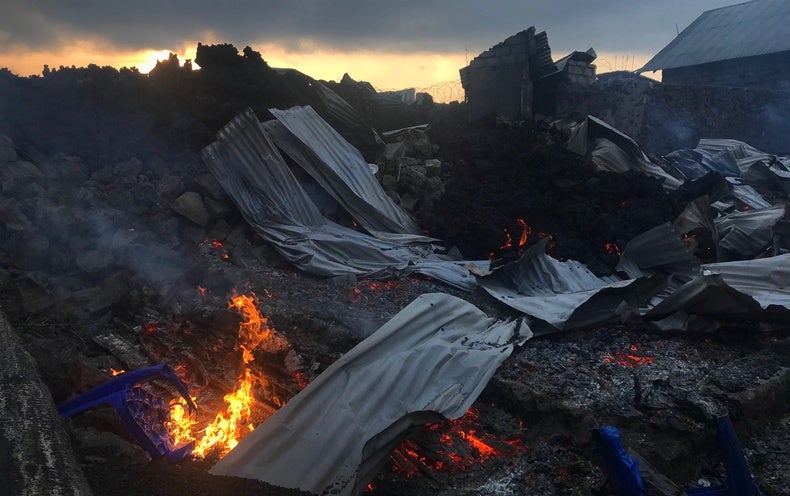 The Congo’s Mount Nyiragongo erupted Saturday night (May 22), sending thousands of people fleeing across the border into Rwanda and filling the skies with orange-red smoke. By Sunday morning, the lava flow had slowed, stopping just short of the area’s major transit hub Goma, and so far no directly related injuries or deaths have been reported.

The last time this volcano erupted, in January 2002, lava covered nearby Goma—the capital of North Kivu province and home to about 2 million people—and left possibly 250 individuals dead and more than 100,000 without homes, according to news reports. Before that, in 1977 the volcano blew its top, sending lava across Goma and killing 2,000 people, according to Britannica.

During Saturday’s eruption, “the lava halted near Buhene on the outskirts of Goma … the city was spared,” said General Constant Ndima, as reported by Al Jazeera. Even so, some 3,500 Congolese people fled across the border into Rwanda, the Ministry in charge of emergency management wrote on Twitter.

“Panic spread as we were in contact with the residents of the north of the city who from their roofs could see the path of the lava as it made its way to the airport,” said Patient Iraguha, a resident of Rwanda who works in Goma, as reported by The Washington Post.

Though one of the world’s most active volcanoes, Mount Nyiragongo may not have been properly monitored, according to news reports.The World Bank recently cut funding to Goma Volcano Observatory due to allegations of corruption, BBC News reported.

In fact, on May 10, the observatory issued a report of increased seismic activity around the volcano; and last year, observatory director Katcho Karume told BBC the crater lake on Mount Nyiragongo had been filling up quickly and upping the chances of an eruption, BBC News reported.

Copyright 2021 LiveScience, a Future company. All rights reserved. This material may not be published, broadcast, rewritten or redistributed.