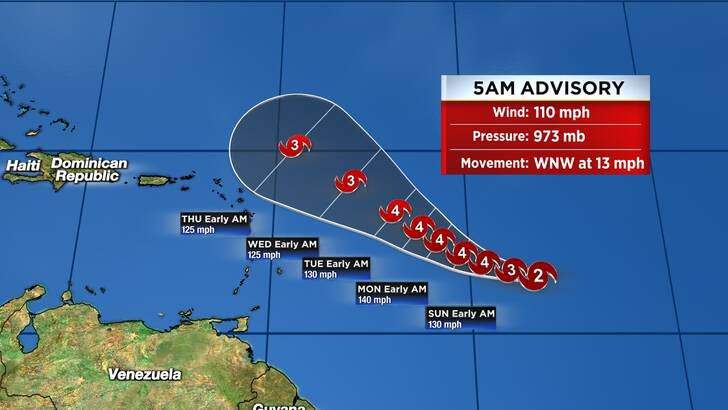 ORLANDO, Fla. – If you blinked, you missed the development of Subtropical Storm Teresa. Teresa is an inconsequential storm near Bermuda that will be weak and short-lived. A subtropical storm is a hybrid storm that has more of a winter-like storm appearance but still gains some of its energy from warm ocean waters.

Meanwhile, small but powerful Hurricane Sam continues to slowly move across the southern and Central Atlantic.

As of 5 a.m. Saturday, Hurricane Sam had maximum sustained winds of 110 mph and was moving west-northwest at 13 mph. The center of Sam was about 1,150 miles east-southeast of the northern Leeward Islands. Major hurricane status begins at 111 mph, category 3 or stronger.

Sam is expected to intensify into a Category 4 by Sunday.

Florida should not see direct impacts from the storm as it lifts north over the coming days. Interests in the northeast Caribbean should continue to monitor the progress of Sam over the weekend.

The Northeast U.S. and Canadian Maritimes should also be mindful of Sam in the long-term as weather systems moving off of the continental U.S. could pick Sam up and move it closer to land.

As of 8 a.m. Saturday, the National Hurricane Center is monitoring a disturbance, south of Teresa, associated with the remnants of Peter and has a 10% chance of cyclone formation in the next two days.

Elsewhere in the Atlantic, another tropical wave is expected to move off Africa in the coming days. Development of this system is likely by the middle of next week as it moves west of the warm waters of the Atlantic.

The NHC says it has a 50% chance of developing over the next five days.

The next named storms will be Victor and Wanda.

If all of the names of the 2021 season are exhausted, a supplemental list of names, rather than the Greek Alphabet, will be used to finish the season. This is new for the 2021 season.