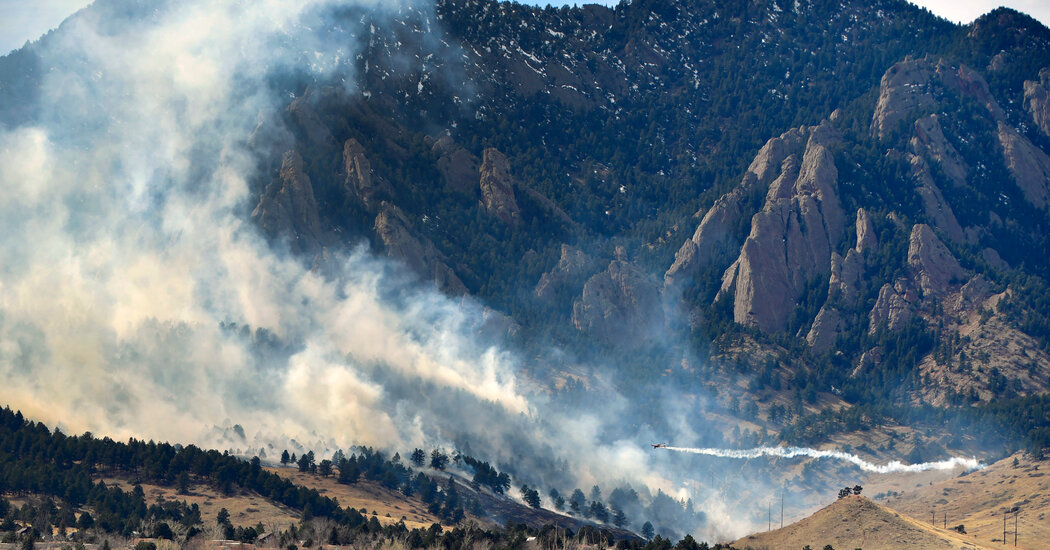 A fire near Boulder, Colo., that had burned nearly 190 acres as of Sunday morning prompted the authorities to evacuate 19,000 people over the weekend, officials said. About 1,600 people and nearly 700 homes remained in an evacuation zone on Sunday.

The wind-fueled wildfire, which was named the NCAR fire because it started near the National Center for Atmospheric Research, was 21 percent contained, the authorities said at a news conference on Sunday. No damage or injuries were reported.

More than 200 firefighters were in the air and on the ground trying to keep the fire away from neighborhoods.

“We’re going to continue to try and corral this fire up into the rocks, into the snow, which is really one of our big holding features right now, and one of the reasons that we’re having really, again, good success,” Michael Smith, the incident commander in Boulder County, said on Sunday.

The cause of the wildfire, which began at about 2 p.m. local time on Saturday, was unclear. Investigators identified the origin area near Bear Creek Canyon on Sunday, officials said.

The authorities on Saturday ordered evacuations in Table Mesa, on the eastern side of the South Boulder neighborhood, and Eldorado Springs, said Marya Washburn, a spokeswoman for Boulder Fire-Rescue.

At the wildfire’s peak on Saturday, the evacuation order affected 19,000 people in an area that covered 8,000 homes and 7,000 structures, the authorities said.

Officials scaled back evacuations after 11 p.m. on Saturday, allowing thousands of residents to return to their homes.

The NCAR fire came after another blaze, known as the Marshall fire, tore through suburban neighborhoods between Denver and Boulder in December and forced the evacuation of tens of thousands of people. The wind-swept fire destroyed about 1,000 homes.

During the Marshall fire, firefighters were unable to fly because of high winds that grounded their aircraft. On Saturday and Sunday, however, Mr. Smith said that lower winds allowed aircraft to fight the fire.

He expressed fear about the upcoming fire season. “I think this is just a sign of the way things are going to go,” he said.

Wildfires are increasing in size and intensity in the Western United States, and wildfire seasons are growing longer. Recent research has suggested that heat and dryness associated with global warming are major reasons for the increase in bigger and stronger fires.