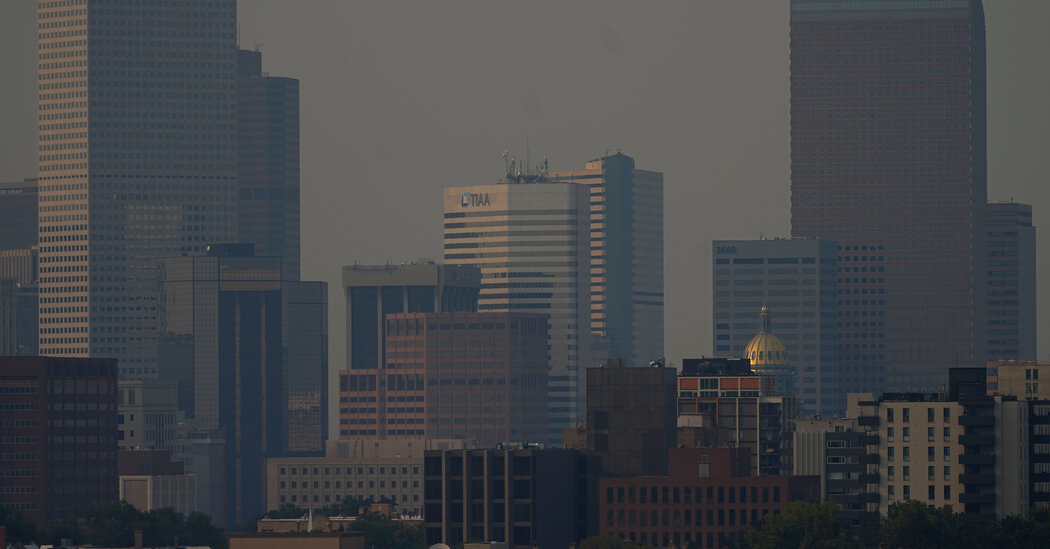 On Monday, the region around Denver was sweltering in summer heat, the scorched skies thick with haze, smoke and ash from a wildfire roaring through the dried-out forests near Rocky Mountain National Park. By Tuesday morning, there was snow on the ground, and temperatures had plunged more than 50 degrees Fahrenheit.

“We switched from summer to winter in a day,” said David Barjenbruch, a senior forecaster at the National Weather Service in Boulder.

Outside his office, an inch or so of snow was already sticking to hillsides and tree branches on Tuesday morning, the start of what was expected to be a daylong snowstorm, dropping more than 12 inches in the foothills and mountains and three to six inches around Denver.

Mr. Barjenbruch said the cold air mass had rolled in from above the Arctic Circle, traveling rapidly south along the spine of the Rocky Mountains. Some of Colorado’s ski resorts, which have been preparing for a socially distanced ski season, were expected to get an early dump, though probably not enough to last until they open around Thanksgiving. Live cameras showed that mountain passes were already a blur of white.

Across Denver, people were hauling potted herbs and flowers indoors and wrapping their bushes in burlap and plastic. Mr. Barjenbruch said one of the biggest threats posed by the storm was that overloaded tree branches, still leafed out for summer, could snap and tumble onto power lines.

Forecasters and fire crews were hoping that the snow might damp the Cameron Peak wildfire in Northern Colorado, a blaze that has exploded to more than 102,000 acres and forced a round of evacuations on Monday.

Sheriff Justin Smith of Larimer County said that while the stark respite from a record-setting string of 90-degree days and punishing drought across Colorado was welcome, it was “certainly not going to stop this fire,” The Colorado Sun reported.

It remains to be seen whether conditions will bounce back to hot, windy and dry after the storm retreats to the north and northwest during the week. Skies are expected to clear in Denver by Thursday, with temperatures climbing back into the more seasonable 70s and 80s for the weekend.

Still, Mr. Barjenbruch said, the snow that had already begun to fall on the fire Tuesday was good news.

“It’s going to hang on trees and give the fire no fuel to burn, and give firefighters a chance to catch up,” he said. “This is the best thing that could’ve happened for this fire.”