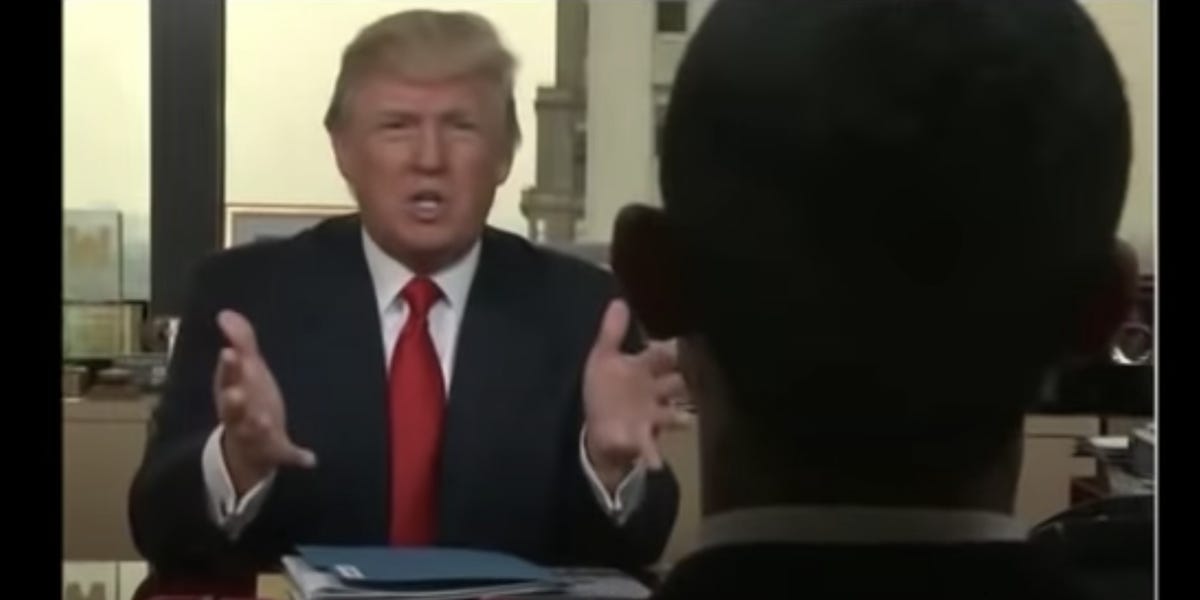 In an extract of Cohen’s “Disloyalty: A Memoir,” published by CNN and the Washington Post, Cohen claims that Trump described Obama as a “Manchurian candidate” who owed his place at Columbia University and Harvard Law School to “f—ing affirmative action.”

According to the CNN extract, Trump, in pursuing his grudge against Obama, hired a lookalike “Fauxbama” and “ritualistically belittled the first black president and then fired him” in a bizarre video.

In the book, reports CNN, Cohen does not name the man hired to play Obama or say on what date the incident took place, but does include a picture from the video.

It shows Trump sitting across his Trump Tower desk from a man resembling Obama. On the desk in front of Trump are two books, one with Obama’s name on the front.

But a copy of the video has emerged online

A parody of Trump’s hit reality show The Apprentice, it was supposed to be aired at the 2013 RNC convention, according to reports, but was canned by party bosses.

In the video, published by Breitbart in 2013, Trump attacks the Obama lookalike’s record as president, his lack of business experience, and his golf game. It ends with Trump hurling his “you’re fired” Apprentice catchphrase at Obama and banishing him from his office.

“They never put it on,” Trump told Breitbart of the RNC decision not to air the video at the time. “The reason they didn’t put it on is because they thought it was too controversial. Controversy. It might not be politically correct.”

Cohen, in extracts of the book published by the Post, details several racist diatribes by Trump. Cohen claims that when ranting about Obama in one incident, he went on to say, “tell me one country run by a black person that isn’t a s—hole. They are all complete f—ing toilets.”

According to the extracts, Trump belittled minority voters, saying, “I will never get the Hispanic vote. Like the blacks, they’re too stupid to vote for Trump.”

“Mandela f—ed the whole country up. Now it’s a s—hole. F— Mandela. He was no leader,” Cohen claims Trump said.

In the book, Cohen’s assessment of his former boss’s character is withering, and he describes him as “a cheat, a liar, a fraud, a bully, a racist, a predator, a con man.”

But the White House has hit back at Cohen, who was jailed last year for lying to Congress and for election finance crimes prosecutors claimed were committed at Trump’s behest.

In a statement to the Post, the White House attacked Cohen’s credibility, describing him as “a disgraced felon and disbarred lawyer, who lied to Congress. He has lost all credibility, and it’s unsurprising to see his latest attempt to profit off of lies.”

But Cohen is not the first source to have claimed that Trump is consumed by hatred for Obama.

Trump launched his political career with the racist “birther” conspiracy theory, claiming, groundlessly, that Obama was ineligible for the presidency because he wasn’t born in the US. (Obama was born in the US state of Hawaii.)

In a notorious incident at the 2011 White House Correspondents Dinner, Obama singled out Trump in the audience and mocked him. Some pundits have speculated the public humiliation was a key factor in Trump’s decision to run for the presidency in 2016.