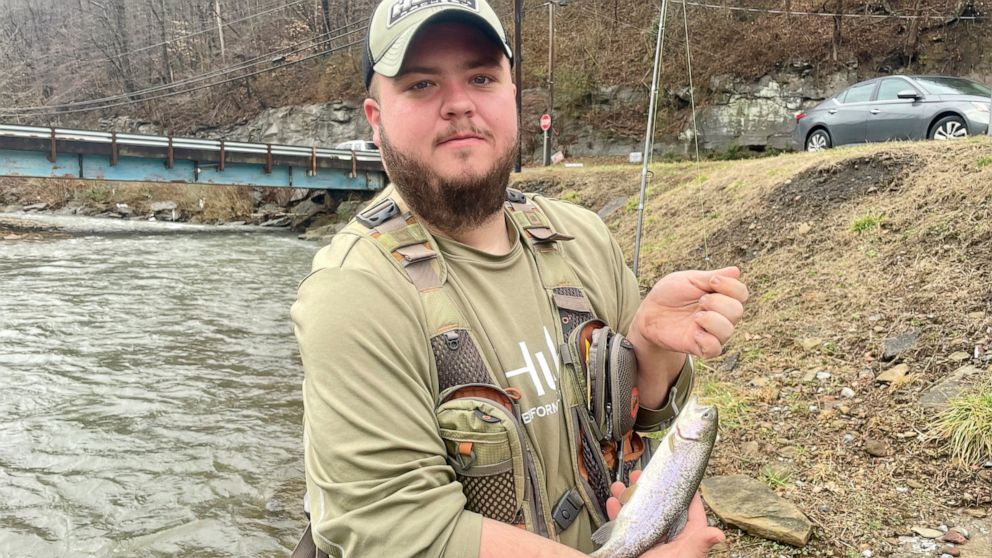 MAN, W.Va. — The day before the disaster hit, Perry Harvey went fishing on Buffalo Creek for one reason.

“There was a gold trout out there I was trying to catch,” he said.

The following morning, his wife’s birthday, Harvey was on his way to pick up a cake, but police had the road blocked off. Miles away, a coal company’s hillside impoundment dams collapsed, sending slurry thundering downhill and into the hollow, inundating small communities and killing 125 people.

For decades after that, fishing of any kind was no longer an option on the southern West Virginia waterway.

The current rose so high that it covered telephone poles. In addition to the deaths, the disaster injured 1,100 and left more than 4,000 people homeless.

As residents gather this weekend on the 50th anniversary of one of the worst environmental disasters in U.S. history, they’re also able to revel in a comeback.

Buffalo Creek, whose habitat was destroyed along a 17-mile (27-kilometer) stretch, is teeming with trout again, after a steady, coordinated effort by Harvey and others to get back what they once had — and share it with future generations.

“My dad and brothers all were fishermen and miners,” Harvey said. “I enjoyed it when I was small.”

He said the adults decided that if they got the kids involved “they wouldn’t be as apt to go out and start worrying about getting on drugs or drinking and stuff like that.”

Long after the Feb. 26, 1972, disaster, the poisoned creek had no life. Dredging by the U.S. Army Corps of Engineers helped but did nothing to support trout habitat.

In 2005, the ecosystem took another hit when water blew out of an abandoned coal mine, turning the creek green. That year, the Buffalo Creek Watershed Association was formed. State regulators sued the mine’s owner. The association used settlement money to start fixing the creek.

“That’s the year we really got cranked up,” Harvey said.

Boulders donated by another mine operator were strategically placed in the creek. The association bought habitat structures to further help form the pools that trout prefer.

Volunteers picked up trash around the creek. Local high school students were brought in by the busload, helping them to fulfill the 40 hours of community service required to graduate.

After its pH level and temperature were checked, the creek was returned to the Division of Natural Resources’ trout stocking program in 2006 after a 34-year hiatus. Restockings now happen several times a year.

“I love it,” said Jacob Turkale, 25, who caught a rainbow trout Tuesday. “I’ve been fishing here for almost 17 years. I want to fish nowhere else.”

The association will hold its annual kids’ fishing event in April, giving away 125 rods and reels and other fishing gear.

But the disaster will never be forgotten. On Saturday, victims were being remembered at the same high school that served as a temporary morgue 50 years ago.

Harvey’s home was spared, barely. When the deluge receded, he saw bodies along the long walk to check on relatives, images that have been seared into the veteran’s mind.

“It brings back old memories of being in Vietnam,” he said.

Barbara Brunty watched from higher ground with her 3-year-old daughter as their home was swept away along with the girl’s Christmas presents: a toy motorcycle, a kitchen set and a Chatty Cathy doll.

That summer, Brunty cried in fear with every storm and strong wind gust that shook her temporary trailer. Eventually, she and her husband, Arthur, rebuilt on the same spot as the old house.

“We’re going to live here as long as he works here,” she said, adding that without the dam, “we could be over here safely.”

The state filed a $100 million lawsuit against mine owner Pittston Coal; then-Gov. Arch Moore accepted a $1 million settlement at the end of his second term. A separate settlement for survivors amounted to about $13,000 per plaintiff.

Pittston announced in 1999 that it was leaving the coal business.

Jack Spadaro, a mine safety investigator and environmental specialist, has made it his life’s work to prevent such disasters from happening again. He was heavily involved in writing federal regulations and beefed-up criteria for the construction of coal waste dams and their maintenance.

Spadaro also wrote the bulk of the state’s report debunking Pittston’s claim that the disaster was an “act of God.” An investigation found the company built the dam on top of coal slurry that had been deposited by an earlier dam, then more material went on top of that.

“It took a mere 15 minutes to totally fail,” Spadaro said. “And people died instantly when that tidal wave came through the valley.”

In eastern Kentucky in 2000, the bottom of a coal impoundment ruptured into an abandoned underground mine, flooding two streams and poisoning a water supply. In 2012, a section of embankment being worked on collapsed at a coal slurry pond in northern West Virginia. A bulldozer slid into the pond and its driver died.

The U.S. Mine Safety Health Administration lists 570 active coal impoundments across the country. West Virginia has the most with 108. Kentucky has 102. MSHA said 49 impoundments pose a significant hazard because of the potential damage from a failure.

The Buffalo Creek that survives today is calm in places and flows briskly in others, its rapids gurgling. The water is tranquil in the pools where the trout like to hide.

“It just doesn’t seem that long ago that it happened,” Harvey said. “But it brings back memories. I remember that just like it was yesterday.”