City of Philadelphia Will Reinstate an Indoor Mask Mandate 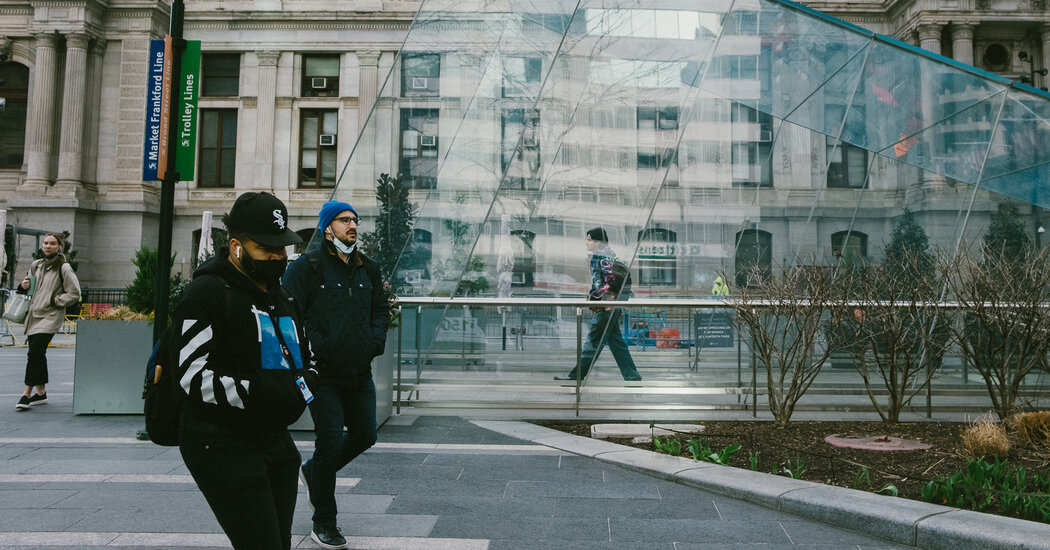 With new coronavirus cases low but rising sharply in recent days, the city of Philadelphia announced on Monday that it will reinstate an indoor mask mandate a little more than a month after lifting it, becoming the first major U.S. city to do so.

“This is our chance to get ahead of the pandemic,” said Cheryl Bettigole, the city’s health commissioner, in a news conference. She acknowledged that the average number of daily new cases, currently at 142, is still nowhere near what it was at the beginning of the year, when the Omicron variant was pushing the seven-day average to nearly 4,000.

But she said that if the city failed to require masks now, “knowing that every previous wave of infections has been followed by a wave of hospitalizations, and then a wave of deaths, then it will be too late for many of our residents.” Over the past week, the city reported that the number of residents who had died of Covid-19 passed 5,000.

The mandate will go into effect next week. A spokesman for the city’s health department said it would end when case numbers and rates go beneath a certain threshold.

The decision comes as cases are ticking up across the country, fueled by the highly transmissible Omicron subvariant, known as BA.2. While the national increase is so far relatively small — about 3 percent over the last two weeks — the growth in cases in Northeastern cities like New York City and Washington, D.C., has been significantly steeper. Some colleges in the Northeast, including Columbia, Georgetown and Johns Hopkins, have reinstated indoor mask mandates in recent days.

Speaking at a virtual news conference on Monday afternoon, Mayor Eric Adams of New York City said that he would follow the advice of his health team in making any determination on reinstating mask mandates in spite of his positive test result on Sunday, rising virus cases in the city and Philadelphia’s decision.

“I am not special as being the mayor. What happens to me personally should not determine how I make policies,” Mr. Adams said. “It should be what happens to the City of New York.”

“I feel fine, no fever, no running nose, no aches and pains,” the mayor said, adding that with his health history of diabetes, “I would probably have had different outcomes if I was not vaccinated and boosted.”

Under Philadelphia’s Covid response plan, mitigation measures are triggered when caseloads or case trajectories pass certain thresholds. Since early March, as Omicron swiftly receded, the city had been at Level 1, or “all clear,” meaning most mandatory measures — including indoor mask mandates as well as proof-of-vaccine requirements in restaurants — had been lifted. Masks have no longer been required at city schools, though people visiting hospitals or riding public transportation still have had to wear them.

The indoor mask mandate is reinstated automatically when the city rises to Level 2, in which average new daily case counts and hospitalizations are still low but “cases have increased by more than 50 percent in the previous 10 days.” The health departments spokesman said over the last 10 days case the average number of news cases had risen nearly 70 percent.

Philadelphia’s system “allow us to be clear, transparent and predictable in our response to local Covid-19 conditions,” said Mayor Jim Kenney in a statement after the announcement was made. “I’m optimistic that this step will help us control the case rate,” he added.

The city’s decision is at odds with the recommendation from the Centers for Disease Control and Prevention. Basing its designation on hospital admissions among other benchmarks, the C.D.C. considers Philadelphia to have a “low” community level, and thus does not advise required masking.

Asked about the difference, Dr. Bettigole emphasized that “local conditions do matter” in making these decisions, and brought up the inequities in the virus’s impact. “We’ve all seen here in Philadelphia, how much our history of redlining, history of disparities has impacted, particularly our Black and brown communities in the city,” she said. “And so it does make sense to be more careful in Philadelphia, than, you know, perhaps in an affluent suburb.”