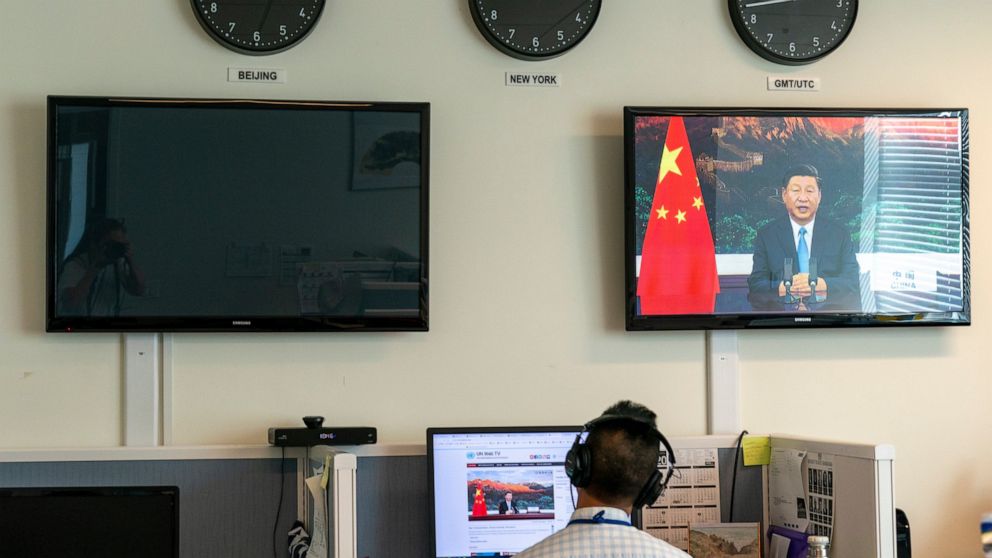 UNITED NATIONS — Chinese President Xi Jinping says his country will aim to stop adding to the global warming problem by 2060.

Xi’s announcement during a speech Tuesday to the U.N. General Assembly is a significant step for the world’s biggest emitter of greenhouse gases.

Calling for a “green revolution,” Xi said the coronavirus pandemic had shown the need to preserve the environment.

“Humankind can no longer afford to ignore the repeated warnings of nature,” he said.

Citing the Paris Agreement that he and former U.S. President Barack Obama helped forge in 2015, Xi said his country would raise its emissions reduction targets with “vigorous policies and measures.”

“We aim to have CO2 emissions peak before 2030 and achieve carbon neutrality before 2060,” he said.

The term “carbon neutrality” means releasing no additional CO2 into the atmosphere, though technically it allows countries to keep emitting if they ensure that an equal amount is captured again in some form.

The announcement was cheered by climate campaigners. Greenpeace executive director Jennifer Morgan called it “an important signal” that showed climate change is “top of agenda for China.”

The goal will be a challenge for China, which relies heavily for its electricity on coal, one of the most carbon-intensive fossil fuels.

China released the equivalent of 10 billion tons of carbon dioxide, or CO2, into the atmosphere in 2018, according to the Global Carbon Project that tracks emissions worldwide. That was almost twice as much as the United States and three times as much as the European Union.

Several other major emitters have set earlier deadlines, with the EU aiming to be carbon neutral by 2050. Frans Timmermans, who leads the EU executive’s efforts on climate change, welcomed Xi’s announcement.

“We need decisive action from every country to keep temperatures under control, tackle climate change and keep our planet inhabitable,” he said.

The United States has so far not set such a goal. President Donald Trump, who once described climate change as a hoax invented by China, has started the process of pulling the U.S. out of the Paris accord.