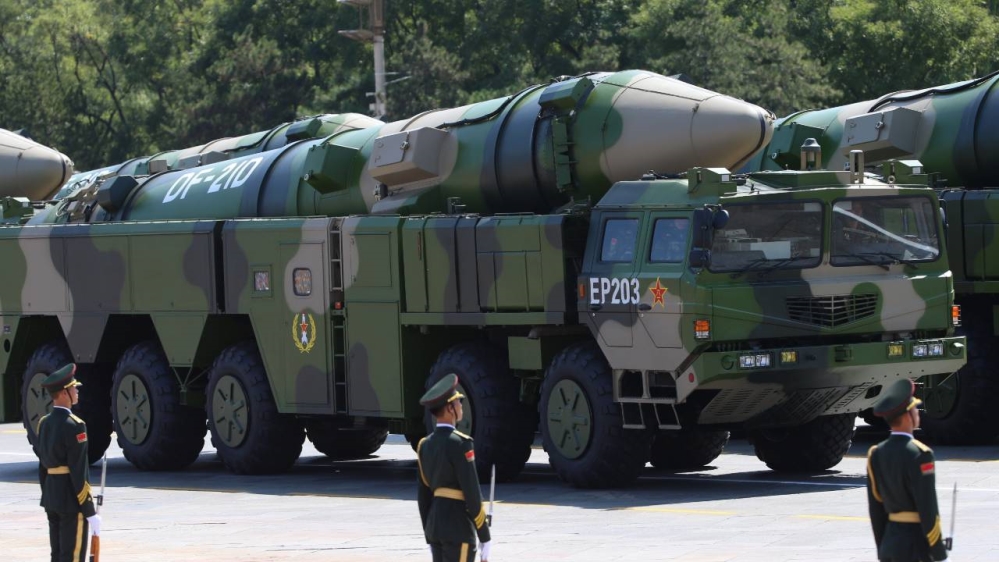 China has fired two missiles, including one dubbed an “aircraft-carrier killer”, into the South China Sea, according to a news report, in a pointed warning to the United States as tensions in the disputed sea lane rise to new levels.

In response, Mark Esper, the US defence chief, said China has repeatedly fallen short of promises to abide by international laws, noting that China seems to be flexing its muscles the most in Southeast Asia.

The two missiles were reportedly fired in the direction of the area between Hainan province and the disputed Paracel Islands, the Hong Kong-based publication added, quoting an unnamed source.

According to the paper, a US U-2 spy plane had reportedly entered a Chinese-designated “no-fly zone” on Tuesday without permission during a live-fire naval drill conducted by China in the Bohai Sea off its north coast.

In a social media post, Liu Xiaoming, China’s ambassador to the United Kingdom, said that the US move “severely disrupted” China’s normal exercises and “training activities.”

Zhao Lijian, China’s foreign ministry spokesman, described the spy plane overflight as “provocative actions” and urged the US to stop.

The DF-26B missile, which was formally launched earlier this month, is capable of hitting moving targets at sea, making it an “aircraft-carrier killer”, according to the state-owned Global Times.

Chinese Defence Ministry spokesperson, Senior Colonel Wu Qian, was previously quoted as saying that the missile can carry conventional or nuclear warheads and is capable of launching precision strikes on land and sea targets.

With its range of 4,500km (2,796 miles), DF-26 can reach the West Pacific and the Indian Ocean, as well as American facilities in Guam, the British island of Diego Garcia and even the Australian city of Darwin.

Meanwhile, the DF-21, has been described as an anti-ship ballistic missile system, also meant for attacking moving ships at sea.

In July, two US aircraft conducted freedom of navigation exercises and military drills with its allies in the South China Sea, prompting an angry response from Beijing.

Speaking on the condition of anonymity to Reuters, a US official confirmed the firing of the two missiles on Wednesday adding that an assessment was under way to determine the type of missile launched.

The Pentagon, meanwhile, confirmed the U-2 overflight, adding that the activity in the Indo-Pacific region was “within the accepted international rules and regulations governing aircraft flights”.

News of the missile launches come as the US announced that it was blacklisting 24 Chinese companies and targeting individuals it said are part of construction and military actions in the South China Sea, its first such sanctions move against Beijing over the disputed seas.

The US Commerce Department said the two dozen companies played a “role in helping the Chinese military construct and militarize the internationally condemned artificial islands in the South China Sea.”

Separately, the State Department said it would impose visa restrictions on Chinese individuals “responsible for, or complicit in”, such actions and those linked to China’s “use of coercion against Southeast Asian claimants to inhibit their access to offshore resources”.

In July, Washington said it could sanction Chinese officials and enterprises involved in coercion in the South China Sea after it announced a tougher stance rejecting Beijing’s claims to offshore resources there as “completely unlawful”.

China claims virtually all of the potentially energy-rich South China Sea, but Brunei, Malaysia, the Philippines, Taiwan and Vietnam also lay claim to parts of an area, through which more than $3 trillion of trade passes each year.

#US move severely disrupted China’s normal exercises and training activities, and violated the rules of behavior for air and maritime safety between China-US, as well as relevant international practices. We urge the US to stop such provocative and dangerous actions. https://t.co/RDJoMvh0zW

The US accuses China of militarising the South China Sea and trying to intimidate Asian neighbours who might want to exploit its extensive oil and gas reserves.

US warships have gone through the area to assert the freedom of access to international waterways, raising fears of confrontation.

A spokesperson for China’s embassy in Washington condemned the US sanctions as “completely unreasonable,” and urged the US to reverse them.

“(South China Sea Islands) is an integral part of China’s territory, and it is fully justified for us to build facilities and deploy necessary defence equipment there,” the spokesperson said.

“The Chinese government has firm determination to safeguard its sovereignty and territorial integrity.”