Caught in a Culture War, Georgetown Day School Holds Fast to Its Mission 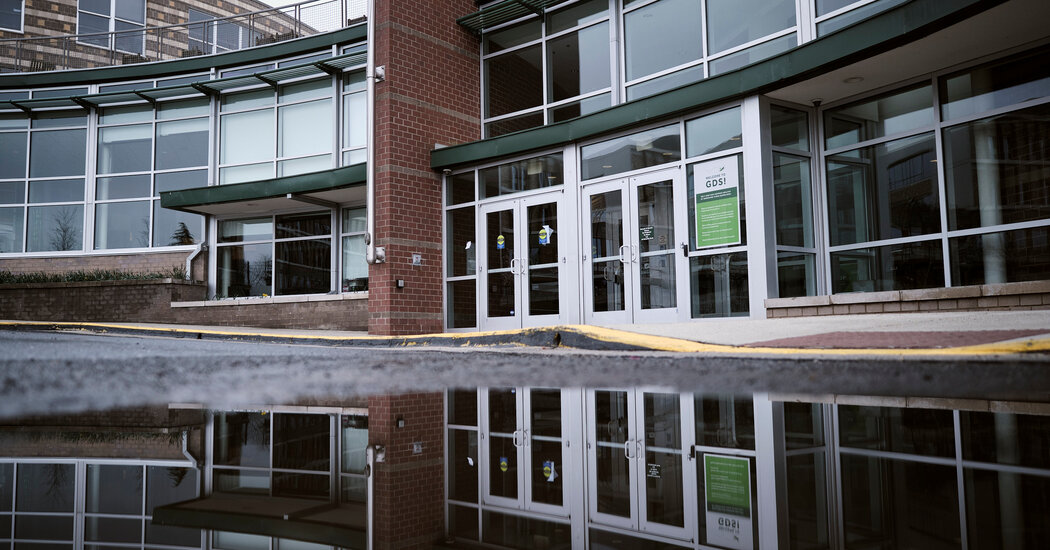 WASHINGTON — A decade after the Supreme Court struck down segregated schooling in 1954, the president of a neighborhood association here wrote a letter urging leaders of local private schools to stop granting scholarships to further the cause of integration, asserting that it was “unwholesome and unwise to have a student body so miscegenated.”

One of the founders of Georgetown Day School, which had been integrated for 20 years at that point and whose population was one-fourth Black, wrote back.

Edith Nash, one of the school’s founders, noted that not only had it “always had more white applicants for scholarship assistance than Negro,” but “a thoroughly mixed enrollment is our aim,” according to the letter, parts of which were published in The Washington Post that year.

“If you feel this population is ‘miscegenated,’” she added, “that’s your problem.”

Nearly 60 years later, the first integrated school in Washington still firmly embraces the mission of its founders. Georgetown Day came under a national microscope this week in the escalating culture war over antiracism teaching in schools.

The war spilled into the confirmation hearings of Judge Ketanji Brown Jackson, the first Black woman nominated to the Supreme Court, who has served on Georgetown Day’s board of trustees since 2019.

The elite private school became a target of Republican senators, who portrayed it as the poster child for critical race theory, an academic term that conservatives have co-opted to challenge efforts to teach children about racism and inequality.

Senator Marsha Blackburn, Republican of Tennessee, took aim at Georgetown Day in her opening remarks at Judge Jackson’s hearing on Monday. The school had hosted a “woke kindergarten” program, Ms. Blackburn asserted, and it had taught 5-year-olds that they can choose their gender and “pushes an anti-racist education program for white families.”

Ms. Blackburn told Judge Jackson that her “public endorsement of this type of progressive indoctrination of our children causes one great concern when it comes to how you may rule on cases involving parental rights.”

But many Georgetown Day parents, students and alumni say the school’s history of social justice activism and its antiracism efforts were why they chose to enroll there.

In interviews, many people in the school’s community proudly cited Georgetown Day’s founding value of racial equality, in defiance of segregation laws. The idea that students were being indoctrinated — and that the school’s core values were being weaponized against the first Black female nominee to the Supreme Court — was as unjust as it was insulting, they said.

“Georgetown Day School’s founding exemplifies what can be best about this country: people of diverse backgrounds coming together to make their community a better place for everyone,” said Debra Perlin, a parent of a first-grade student. She described the school as a “nurturing, caring and academically rigorous environment.”

Forty percent of the 1,075 children who attend the school identify as students of color. Core to Georgetown Day’s academic vision is fostering open-mindedness and a collective commitment to justice, parents said; it held a Transgender Day of Visibility last year and a week of Black Lives Matter events this year.

Chris Suarez, another parent, said he would not describe his kindergartner as “woke” but worldly. “My son brings home books that are reflective of the diversity of cultures in the United States, that open him up to many different perspectives,” he said. “And I think that’s a valuable thing.”

Conservative lawmakers tried to paint Judge Jackson as a champion of critical race theory based on her past citations of authors and texts used to shape modern civil rights debates — namely, Derrick Bell, the lawyer who is widely credited with founding critical race theory, and Nikole Hannah-Jones, the creator of The New York Times’s 1619 Project.

But Georgetown Day emerged as a surprising target.

Located in the wealthy Tenleytown neighborhood in Northwest Washington, the school has for decades educated children of the liberal and conservative elite. Parents who choose to enroll their children buy into its mission, for more than $40,000 a year.

That the curriculum is hardly foisted on families who seek out the school appeared to matter little to Republicans who injected it into Judge Jackson’s hearings.

One of the most racially charged lines of questioning came from Senator Ted Cruz, Republican of Texas, who claimed on Tuesday that Georgetown Day’s curriculum was “filled and overflowing with critical race theory.” Flanked by a blown-up page from “Antiracist Baby,” by Ibram X. Kendi, Mr. Cruz held up book after book that he described as assigned reading at the school and grilled Judge Jackson about whether she endorsed their messages.

He went on to read a passage from another of Dr. Kendi’s books, “Stamped (For Kids): Racism, Antiracism and You,” which is also in the library catalog and on reading lists at the private school in Houston that Mr. Cruz’s children attend.

In an interview on Wednesday, Mr. Cruz said his questions were not meant to suggest that parents did not know what their children were learning, or that there should be any action taken against the school — which would undermine principles like school choice and private school autonomy that Republicans champion.

“I’m saying that Judge Jackson is on the board of a school that aggressively teaches critical race theory,” he said, “and that is an extreme and divisive theory that pits children against other children, divides us based on race, and teaches a false and revisionist history of our nation.”

Judge Jackson told Mr. Cruz that she had not reviewed the books and that they do not come up in her work.

But what resonated most among members of the Georgetown Day community was her description of the school’s “special history,” citing the Jewish and Black families who banded together to create the institution in 1945 because their children could not attend public schools together.

“The idea of equality, justice, is at the core of the Georgetown Day School mission,” Judge Jackson, whose parents attended segregated schools, told Mr. Cruz. “It’s a private school such that every parent who joins the community does so willingly, with an understanding that they’re joining a community that is designed to make sure that every child is valued, every child is treated as having inherent worth, and none are discriminated against because of race.”

Aidan Kohn-Murphy, a senior at Georgetown Day and the president of the Student Staff Council, its student government, said he was “confused” by the “gotcha questions,” given the school’s history.

Mr. Kohn-Murphy has attended Georgetown Day since the fourth grade, and he said he could not recall being instructed in critical race theory or reading any of the books that Mr. Cruz displayed. But along with “To Kill a Mockingbird” and “The Great Gatsby,” he said he had read books that reinforce the notion that the “fight against racism is not being colorblind, not pretending that racism doesn’t exist.”

“No one is indoctrinating anyone,” he added. “We are learning from the past.”

Georgetown Day has also taught Mr. Kohn-Murphy how to weigh diverse perspectives, he said. In eighth grade, students are required to complete a project on a constitutional issue and to engage with speakers who hold opposing views. His group chose affirmative action. One of the speakers his group invited was Edward Blum, the conservative legal strategist who has fought to overturn affirmative action in college admissions and who helped bring a case against Harvard University to the Supreme Court this year.

Judge Jackson is one of 23 members of Georgetown Day’s board of trustees; her best friend and college roommate, Lisa Fairfax, a law professor at the University of Pennsylvania, is the board’s chairwoman. Judge Jackson would not be the only Supreme Court justice with ties to Georgetown Day: Justices Ruth Bader Ginsburg and Thurgood Marshall, the first Black Supreme Court justice, also sent their children there and Justice Marshall sat on its board of trustees.

Georgetown Day describes the board as working closely with its head of school to ensure its “short- and long-term financial health” and to safeguard its “founding purpose as a racially and religiously inclusive school whose educational philosophy derives from the belief that diversity is the ground out of which great learning grows.”

Spokeswomen for Georgetown Day and its board of trustees did not respond to a request for comment.

The action plan includes a litany of diversity, inclusion and equity efforts, including “anti-racist education programming for white families,” a new mentoring program for faculty of color and considering classroom demographics as part of the placement process for students.

At a parent meeting where the head of school discussed the plan, Ms. Fairfax introduced a new provision in the enrollment contract that parents sign, the school newspaper reported in January. The provision required that parents “acknowledge and understand that G.D.S. is an institution that values diversity, equity and inclusion, and that has made a commitment to work actively against individual and systemic racism, hatred, oppression and bigotry of any kind.” By signing the document, parents agree to join in the school’s efforts, it said.

The provision only formalizes what many alumni and parents described as an unwritten contract that had been understood for decades.

Sean Fine, the parent of a junior who has attended the school since the second grade, said his son was learning how to confront the same societal issues the school was grappling with when he graduated in 1992.

“Our kids are not robots,” Mr. Fine said. “They’re not told what to think, they’re taught how to question, and they’re exposed to ideas in an open environment.”

Referring to Mr. Cruz’s attack, he added: “They’re being taught how to identify things like this — tactics that divert away from what we really need to be talking about.”