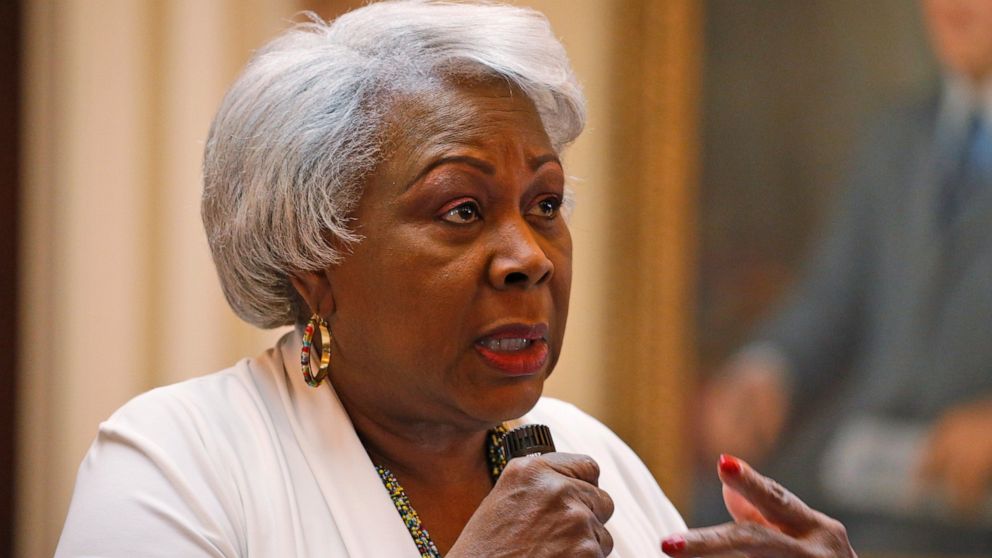 NORFOLK, Va. — When protesters gathered at one of Virginia’s Confederate monuments in June, police say a state senator approached them with a warning: “(T)hey are going to put some paint on this thing, and y’all can’t arrest them.”

Sen. Louise Lucas, 76, a Black woman and high-ranking Democratic power broker, stood near the 56-foot (17-meter) memorial in the city of Portsmouth. Police said she was with a group of people shaking up cans of spray paint.

“(T)hey gonna do it, and you can’t stop them … they got a right, go ahead!,” police claim Lucas said.

Lucas’s alleged statements are in a probable cause summary police filed last week. Two felony charges say she and several others conspired to damage the 19th Century memorial during a protest.

Heads were eventually ripped off some of the statues. And one statue was pulled down, critically injuring a protester.

The senator’s attorney, Don Scott, has said she left the scene hours before the statue was torn down. And Lucas, who is the state Senate’s President Pro Tempore, has said she will be vindicated.

The probable cause summary offers a window into the police department’s case. Many already question its legitimacy, from the way it was filed to its timing. One legal expert said a judge could view Lucas’s alleged statements as protected speech.

“I haven’t seen cases like this one specifically – just arrests of some who directly participated in unlawful activity,” William & Mary law professor Timothy Zick wrote in an email. “Depending on how the facts develop, this might be a case of charging someone for advocating civil disobedience. That would raise First Amendment concerns.”

Portsmouth is a majority Black city of nearly 100,000 people. The damage to the memorial and the protester’s injuries prompted blame against protesters and police alike. Lucas had called for the resignation of Portsmouth’s police chief, Angela Greene, who is also Black.

The charges against Lucas were filed without the cooperation of the city’s prosecutor. And Lucas’s allies view the case as shamelessly political. Lucas was charged in a warrant the day before state lawmakers met to work on various police reforms, including ones Lucas championed.

According to the probable cause summary, Lucas arrived at the monument June 10 and told police they could not arrest anyone who put paint on the memorial.

Police “informed Senator Lucas that she could not tell people they can do that,” the filing said. “Lucas replied, ‘I’m not telling them to do anything, I’m telling you, you can’t arrest them.’”

Members of the group were livestreaming on social media and telling others “get down here, it’s about to go down,” the probable cause stated.

City officials arrived and explained that City Council was in the process of removing the monument legally and safely under a new state law.

“Senator Lucas then proceeded to announce loudly, ‘The city has had three years to cover it,’ and gesturing to the group gathered yelled, ‘Let them cover it!,’” the probable cause states.

“Someone in the group yelled, ‘y’all heard her! Go cover it!,’ at which time people began climbing the protective fence … and began spray painting the monument,” the filing stated.

“Over the next several hours, dozens more people arrived and spray painted the monument … ,” the probable cause stated. “They eventually broke pieces of the statues off and ultimately pulled one of them down, which struck a man and caused a life-threatening injury.”

Zick, the William & Mary law professor, questioned the strength of the case.

Speech that calls for an unlawful action is protected unless it is “directed to inciting an imminent violation and that violation is likely to occur,” he said.

Zick pointed to two phrases in the probable cause: “Go ahead” as well as “I’m not telling them to do anything, I’m telling you, you can’t arrest them.”

“If those are the facts, then the senator’s speech would likely be protected,” Zick wrote.

“That said, a judge might focus on the ‘go ahead’ statement as advocating imminent destruction of public property,” he added. “But that seems like a thin case, given the follow-up statement.”