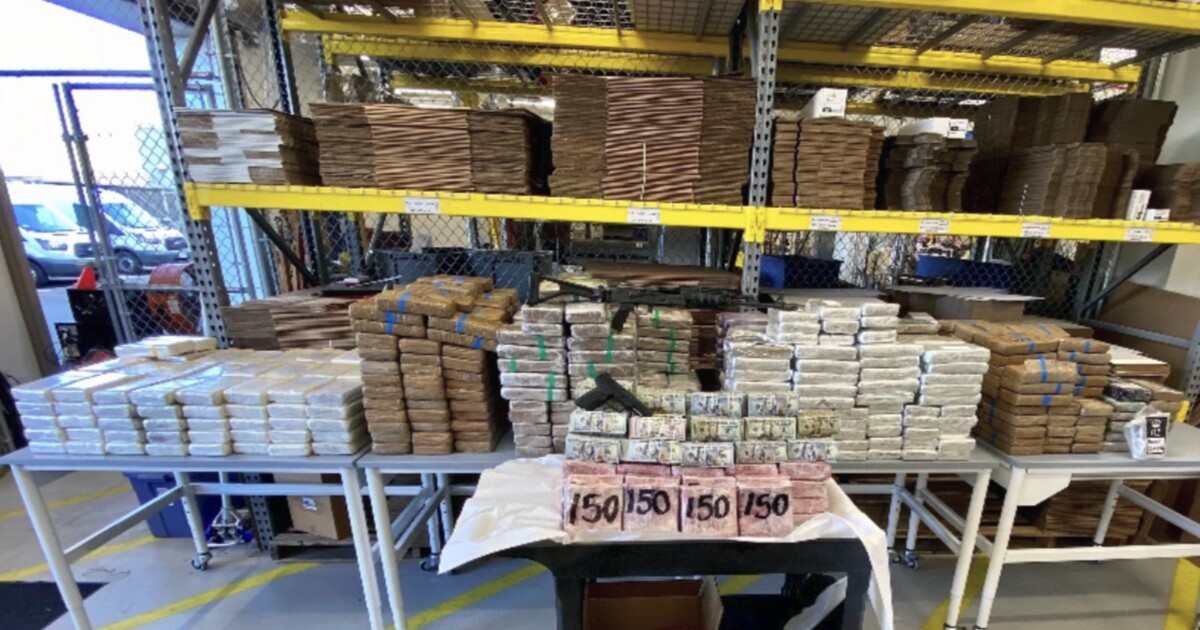 The cumulative seizure — $3.5 million in cash, 685 kilograms of cocaine, 24 kilograms of fentanyl, about 20,000 rounds of .50-caliber ammunition and hundreds of body armor vests — is believed to be the largest of its kind in the Southern District of California, federal prosecutors said.

The stash illustrates the pillars of a drug-trafficking empire: narcotics that flow north and illicit proceeds that flow south, along with U.S. weaponry to maintain control over it all.

The case is part of a much broader investigation into the cartel’s activities, a probe that began nearly a decade ago in San Diego County and has resulted in charges against more than 125 people, many of them leaders in the inner circle of the organization.

One thread led investigators to a pair of brothers, Jorge Alberto Valenzuela Valenzuela and Gabriel Valenzuela Valenzuela, identified as high-ranking members who together own multiple Mexican trucking companies that they use to transport cocaine from Sinaloa, Mexico, into the U.S., according to an arrest affidavit. The trucks are also used to ferry cash from the drug sales back to Mexico, authorities said.

Burgos, Alatorre and Yee are accused of working for the brothers, according to the affidavit.

On Oct. 15, agents watched Burgos and Jorge Valenzuela at an airport in Long Beach, preparing to board a private jet with eight suitcases. But the pilot inspected the contents of one piece of luggage, discovering what appeared to be bricks of drugs wrapped in plastic, according to the affidavit.

Valenzuela was arrested Oct. 29 outside of Boston after taking another flight from San Diego to the East Coast.

A subsequent search of the commercial facility revealed the millions of dollars, most of it wrapped in plastic and coated in axle grease. The drugs were found in the garage, and the ammo and body armor were found loaded into a tractor-trailer — likely bound for Mexico, investigators said. An AK-47-style rifle, which had been reported stolen in Los Angeles in 2017, was also seized.

Authorities did not give the exact location of the facility.

“This seizure is significant not just because of its size, but because it demonstrates the direct correlation between narcotics, illicit money and guns that drives violence in our communities and destroys lives,” said Cardell T. Morant, special agent in charge of Homeland Security Investigations. The agency worked jointly with the Drug Enforcement Administration, the San Diego Police Department and Sheriff’s Department and the U.S. attorney’s office.

The initial investigation into the cartel began in 2011, when authorities thought they were dealing with a small-scale drug distribution cell in National City and Chula Vista. But the drugs were traced back to the cartel, and the case was expanded and continues today.

Last week, a former Mexican federal police officer alleged to be a high-ranking member, Ramón Santoyo Cristóbal, was extradited to San Diego following an arrest last year in Rome on a 2016 warrant.

There have also been tunnel builders, money launderers and numerous low-level associates prosecuted as a result of the investigation.

While Guzmán had been indicted in San Diego as part of a prior investigation, he was ultimately prosecuted in Brooklyn. He is serving a life sentence in a super-maximum security prison in Colorado.