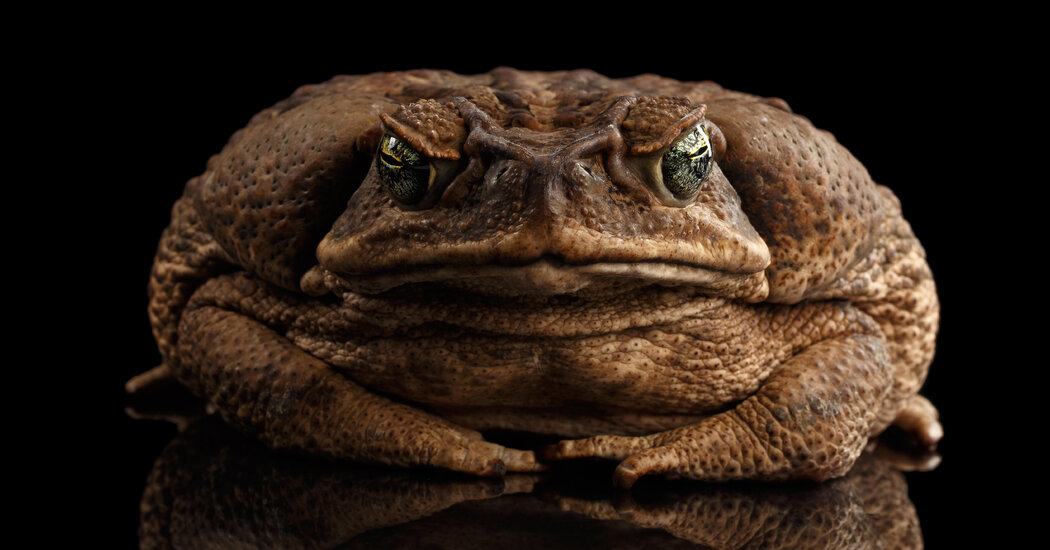 In Australia, poisonous cane toads have become their own worst enemies.

For decades, scientists have been witnessing cane toad tadpoles devouring their younger kin in the puddles and ponds they share. The cause of the cannibalistic behavior has been a mystery, until now.

A new study, published this month in the journal Ecology and Evolution, found that cane toad tadpoles in Australia develop an insatiable appetite when they’re exposed to a toxin found in cane toad eggs, the same toxin that makes the toads poisonous.

Cane toads, which are native to South America and Central America, were introduced to Australia in 1935 by scientists who hoped they would bring down the number of cane beetles, which were causing problems for Australia’s sugar cane farmers. With ample prey and no predators able to withstand their poison, the toads quickly proliferated to number in the tens of millions, becoming an invasive pest that has squeezed native amphibians out of habitats in Australia.

But something changed as they settled into their Australian homes. Such cannibalism among cane toads had not been observed in the toad’s native range. It started to be observed across Australia only in recent decades, suggesting that this behavior evolved rapidly in the Australian population.

“This is a unique case where evolution is extremely rapid and we can see it happening in real time,” said Jayna DeVore, a postdoctoral researcher at the University of Sydney and an author of the study.

Just over a decade ago, scientists in Australia, including Michael Crossland, a research fellow at the University of Sydney who is also an author of the study, were studying the impacts of cane toads on native frogs when they discovered that cane toad tadpoles had a fierce appetite for hatching cane toad eggs, flocking to traps baited with them even when offered other kinds of amphibian eggs.

This led Dr. Crossland to conduct a series of experiments to better understand this phenomenon. Last year, he and his colleague Richard Shine, a biologist at Macquarie University, proved that cane toad tadpoles are attracted to chemical compounds associated with cane toad eggs and hatchlings. These eggs are chemically similar to those of other amphibians, but there is one important difference: They contain bufadienolide toxins, the same chemical that makes cane toads poisonous and protects them from predators. The researchers suspected that it was this chemical that was triggering the tadpoles to feed on the younger members of their species.

The researchers also offered the tadpoles eggs as they were hatching. They found that the hatching process caused the tadpoles to exhibit the same cannibalistic hunger as when the bufadienolide toxin was added to their water. That suggests the toxins within the eggs are released into the water when the hatchlings emerge from them.

“We’ve known for a while that they’re highly cannibalistic, but this explains the mechanism that seemed to be driving that cannibalism,” said Matthew Greenlees, a cane toad expert and postdoctoral researcher at Monash University who was not involved with the study.

The study’s authors argue that cane toads in Australia most likely evolved this response to their own toxins to reduce the number of other cane toads in their habitat.

“It’s well known that toad tadpoles in Australia compete very strongly with each other,” Dr. Crossland said. “The density of cane toads in Australia is so much greater than it is in their native range and under high-density conditions, cannibalism is likely to evolve. They’re basically working out a way to eliminate future competitors.”

The fact that cane toads have been able to evolve this cannibalistic behavior in such a short time is “unbelievable,” Dr. Crossland said. “The toads only got to Australia in 1935. It’s evolution in fast motion.”

Invasive species tend to evolve faster than native species, in part because they multiply rapidly. This allows scientists to watch evolution unfold over the course of decades, as opposed to centuries or millenniums.

The researchers believe that cane toads in Australia are not done evolving. For their next study, they plan to examine how cane toad hatchlings are evolving to defend themselves against their cannibalistic elders. “It’s really an arms race between the increasingly cannibalistic tadpoles and the hatchlings,” said Dr. DeVore.