Can California Really Push Back Against Red States? 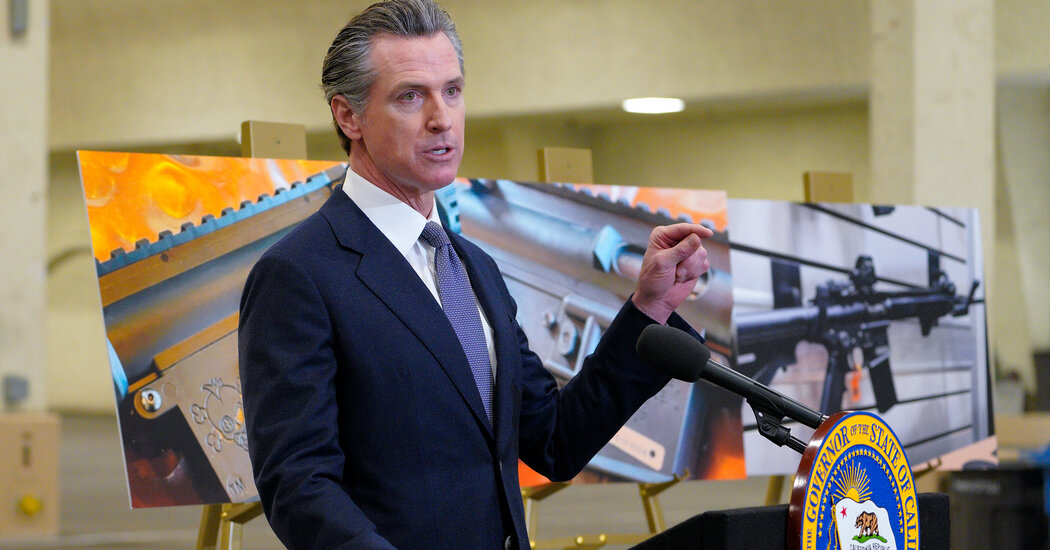 If there’s one thing we know about California’s officials, it’s that they love to declare that California is a leader in everything — whether it’s tackling climate change or transforming the world through technology.

In recent months, California has taken the lead in yet another way: As conservative states move to enact far-right legislative agendas, politicians in California say they’re spearheading the resistance. State lawmakers have proposed measures that would make California a kind of legal sanctuary for women seeking abortions and parents with trans children. Gov. Gavin Newsom called for gun control legislation modeled on Texas’ abortion law, which would allow private individuals to sue makers of restricted firearms.

And as my colleague Shawn Hubler and I reported in this article about why red and blue states are shifting even further apart, Newsom has also become more vocal in his criticisms of the policies implemented by his conservative counterparts.

“We are not going to sit back and neutrally watch the progress of the 20th century get erased,” he told us.

Of course, for years, leaders of states like Texas and Florida have painted the Golden State as a dystopian hellscape in efforts to appeal to their Republican bases, and to lure businesses and residents.

Experts told us that this kind of us vs. them tension among states benefits elected officials politically by creating a clear vision of the opposition — and perhaps by distracting from the problems that the nation’s biggest states have in common.

As Christopher Thornberg, founding partner of Beacon Economics, a consulting firm based in Los Angeles, told me, both Texas and California have skyrocketing housing prices and have been hit hard by the effects of climate change.

“If you drive down a standard road in Houston and a standard road in Los Angeles, you’re going to hear the same gripes and complaints,” he said. California is still relatively unaffordable, which limits the state’s status as a refuge for people fleeing policies in less-expensive states.

But does that mean efforts to make the state a safe haven are purely symbolic? Definitely not, as advocates and lawmakers told me.

Scott Wiener, the state senator who proposed the legislation aimed at making California a legal haven for families with trans children, said that California’s government must be able to multitask as families face emergencies on a variety of fronts.

L.G.B.T.Q. communities around the country over decades have endured “wave after wave” of legislation aimed at restricting their rights — including efforts to bar gay couples from getting married or adopting children, various regulations targeting trans children, and recently, efforts to ban teachers from discussing sexual orientation and gender identity in schools.

So Wiener said his proposal was meant to send a message: “We will do everything in our power to protect you and give you refuge from disgusting people who are using trans children as political pawns.”

At the same time, Wiener acknowledged, “you can’t solve every problem with one bill.”

The state’s housing crisis, he said, must be addressed, too: “This massive, intentional housing shortage makes communities less diverse and less welcoming — less diverse racially, and in terms of income.”

People from other states cast out of their homes do “run up against this housing shortage” when they come to California, said Alexis Sanchez, the director of advocacy and training at the Sacramento LGBT Community Center.

Still, Sanchez said that California leaders’ outspoken support of L.G.B.T.Q. communities could have tangible effects for young trans people — whether or not they’re directly affected by policies in other states — just by showing what’s possible.

That’s the reality for Violet Augustine, 37, an artist, art teacher and single parent in Dallas who plans to move with her 6-year-old trans daughter to California.

On a recent video call, her daughter, Isa, bounded around her room, showing off her “rainbow light,” and introduced a SpongeBob SquarePants stuffed animal. Her mother laughed and tried halfheartedly to corral the girl, who wore a multicolored floral print dress. Augustine said that Isa wasn’t always like this.

When Isa was a toddler, Augustine recalled, she started to display what the mother later confirmed were signs of gender dysphoria.

“She started talking about how she hated herself and she basically wanted to die,” Augustine said.

When she started affirming Isa’s identity as a girl, she told me, it was like meeting her child for the first time. But she said she felt unsafe being in public with Isa in Texas.

So although she knows it’ll be difficult to afford to live in Los Angeles, the way Augustine sees it, she doesn’t have a choice.

“Figuring out how to financially make it is just the price I’m going to have to pay,” she said.

For $3 million in California.

“Arguably the best views of the city come from a quiet neighborhood park in Corona Heights, just north of Market Street in the geographic center point of San Francisco. This park is tucked away at the top of a hill that can be accessed via gradual inclines or wooden staircases, where you’ll be met with large boulders that offer refuge from the wind and a place to chill. 360 degree views of downtown SF, Twin Peaks and Sutro Tower accompany a peaceful escape from the hustle of the city. If I ever visited SF and hadn’t been here forever, this is where I’d go.”

One of Southern California’s greatest natural shows has arrived in full bloom.

Golden California poppies and other wildflowers can now be seen in all their glory at the Antelope Valley reserve in Lancaster.

“It’s like the hill is on fire,” Aniceto Hernando, who recently visited the poppy reserve for the first time, told ABC7.

Thanks for reading. We’ll be back tomorrow.

Soumya Karlamangla, Mariel Wamsley and Jonah Candelario contributed to California Today. You can reach the team at CAtoday@nytimes.com.