Can a Cell Remember? 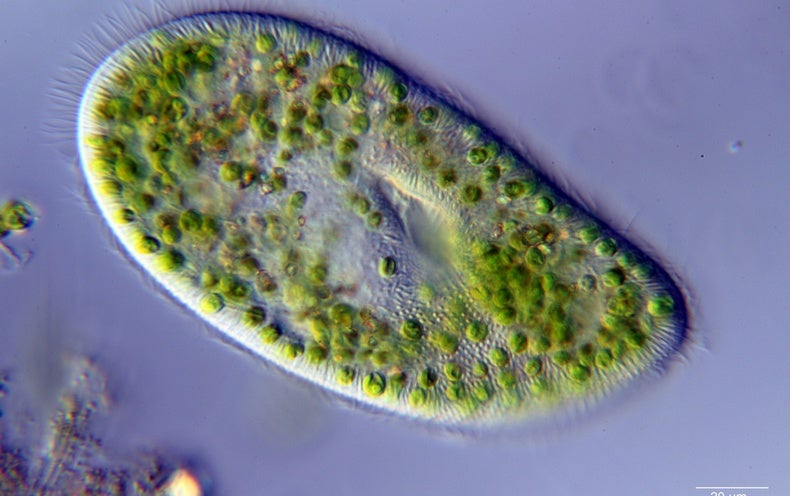 Humans have been understandably obsessed by our big brains and their big powers. After all, how many other species have invented ibuprofen, electric blankets and happy hour? But it may be time to take a big breath, a step back, and ask what a cell can do.

I wrote recently about how Stentor, the enormous trumpet-shaped, single-celled predator, may be capable of changing its “mind.” But this is not the first or even second time free-living cells have shown signs that they possess something like cognition. It was already known that Stentor coeruleus—the swimming Stentor—is capable of “habituating” to touch; after you poke it long enough, it will stop contracting so readily, and it can remember to be less touchy for a least a few hours. No one knows how.

Stentor and another ciliate called Paramecium improve their escape times from capillary tubes (the microbial version of a classic experiment with rodents called the “runway” learning paradigm) with experience, although in the case of Stentor, only if the tube was vertical.

In the mid-20th century, Paramecium actually got the Pavlov’s dogs treatment (also called classical conditioning) several times. Beatrice Gelber, working alone at the University of Chicago in the 1950s, showed that paramecia trained to associate a metal wire with clinging, delicious bacteria would still flock to the wire even if it was later presented without bacteria. Paramecia trained on a wire alone would not. Her results were strongly criticized and mostly dismissed at the time, although one recent analysis concludes she proved the case.

In another notable example in the 1970s, scientists at Mankato State University exposed paramecia to Pavlovian training sessions of a four-second tone paired for the last two seconds with an electric shock. After two or three sessions, about half or more of the apparently gun-shy paramecia initiated “avoiding response”—a backward jerk and/or turn and resumption of swimming—in response to a solo tone.

Incredibly, they could remember to do this for at least 24 hours. They could also be untaught if the tone continued to be unaccompanied by a shock, and then be retrained by pairing them once more. If this study is to be believed, they could also somehow distinguish between 300 and 500 hertz tones in deciding whether to initiate an escape. Yet other conditioning experiments with ciliates using repellant stimuli like shock or heat failed to show an association. It’s fair to say that, if the case is not closed on cells and associative learning, the evidence is highly suggestive.

One further example of wild cellular learning merits mention. In an experiment published in 2008, the slime mold Physarum (a single-celled giant amoeba) learned to anticipate periodic puffs of cold dry air. After three regularly timed puff cycles, the slime mold reacted as if it was expecting another puff at the appropriate time by slowing down, its usual reaction to the unwelcome air. It not only remembered; it could somehow tell time.

If it exists, what could the mechanism of all this apparent learning and deciding be? Single cells obviously have no brains or neurons, but they have many other complex structures and molecules upon which natural selection can act. In the case of ciliates like Stentor and Paramecium, as I wrote last time, this is rather an understatement.

Just because other life isn’t wired the way we are does not mean they don’t have hardware capable of producing something like it, perhaps in ways radically and fascinatingly different from ourselves. If the end is the same, do the means matter?

But there is an even more shocking possibility that is being entertained by a growing and diverse cadre of Ph.D.s: animals and ciliates do use the same mechanism.

Take, for instance, the ferret. In an example of classical conditioning, ferrets trained to associate a signal with a stimulus that causes a blink at regular intervals will blink at the appropriate moment after hearing the signal alone. One 2014 study of ferret brain cells responsible for this eyeblink timing implied individual cells were capable of learning and anticipating this same interval all on their lonesome.

Other experiments have traced the acquisition of habituation in the gill withdrawal reflex of the sea slug Aplysia to changes in individual cells. Recent studies in sea slugs and rodents alike have implied certain memories can be transferred between animals or generations via RNA and DNA. Memories have also been transferred from one slime mold to another when they fused. Studies at all levels of life have implied that individual cells or networks of non-neural cells are capable of forming memories. Clearly, brains and nerves are not the last word on memory.

Though it is by no means certain that free-living single cells (if they can indeed form memories) use the same methods as vertebrates, they do seem to possess the same tool kit. The chief hard-drive suspects are DNA or protein tags. The idea is that small chemicals like methyl groups can be added to or removed from DNA histones—the proteins around which DNA is wound—or other proteins in the cell as a result of a memory-forming experience.

These physical tags then make it more or less likely that genes are turned into proteins by physically altering their accessibility to the enzymes that do the job, or that certain extant proteins do or do not do their jobs, or do them better or worse, and that in some such manner—sometimes straightforward, sometimes mind-splittingly complex—memories may be formed. If the idea that DNA or proteins could serve as hard drives seems extravagant, it’s worth noting individual proteins may be capable of far more than we ever expected; at least one recent report suggests a single protein may be the equivalent of a programmable six-minute timer in fruit flies.

Chemical tags are by no means the only suspects, either. There are other structures and mechanisms (the cytoskeleton, for instance, the extracellular matrix, bioelectricity, or even simple protein clumping) that could conceivably be tasked with encoding memories. One recent paper implicated the tube size of slime molds—as in, the giant, visible-to-the-naked eye tubes that compose the organism—that could be a memory repository. It is possible that memory formation in any given organism relies on several systems. Various life forms could rely on characteristic combinations of methods.

Or perhaps, as with the genetic code, there is one more or less unifying system. In 1962, Gelber wrote: “Simply stated, it is hypothesized that the memory engram must be coded in macromolecules…. Possibly the biochemical and cellular physiological processes which encode new responses are continuous throughout the phyla (as genetic codes are) and therefore would be reasonably similar for a protozoan and a mammal.”

Jennings, too, as early as the turn of the 20th century, sensed and believed that the behavioral workings of animals were often elaborations on systems already in place in unicellular life. A learning and memory system already present in our single-celled common ancestors could also help explain recent experiments that imply plants, too, can learn and remember.

An even more daring question arises: is there a system organizing the systems? Computational biologist Dennis Bray, in his 2009 book Wetware, speculates that a cell has neurons in the form of proteins and neural nets in the form of interlocking protein cascades; sequential protein collisions alter their targets (which may be other proteins or even genes) in a network, communicating and processing information down biological wires or circuits. Cells may even have some sort of central processing unit (the subtitle of his book is “A computer in every living cell”).

In animals, he suggests this could reside in the centrosome, a place where an assessment of protein traffic carrying information about conditions inside and outside the cell could be integrated, assessed and acted upon to produce something like decisions. And the capacity to make decisions is the very thing mounting evidence seems to indicate single-celled Stentor is capable of.

Of course, much of this is still pretty out there, evidence-wise. As I write, biologists are dimly glimpsing the true, staggering complexity of cells (extrachromosomal DNA loops and the dark matter in DNA are but two further examples), and chattering excitedly from a ship at sea about the nature of the newly discovered continent. But really, we still just don’t know.

Given the shocking (to me) lack of consensus on how Pavlovian conditioning operates even in animal brains (which also makes me feel that confident pronouncements that free will is an illusion border on reckless), I think it’s time for us to throw preconceived notions of what cells are capable of out the window, rather than unexpected experimental results. Jennings and Gelber got more or less the same treatment because their critics had already decided their results were impossible. With the benefit of the molecular revolution, we now see that maybe their results aren’t so far-fetched after all.

If it is true that sensitive plants can learn, slime molds can remember and Stentor can decide—and certainly, extraordinary claims require extraordinary evidence—one of the most exciting biological prospects of the coming years will be discovering exactly how they do it. We may be stunned to realize, as we have been before, they are not so different from us.