California Woman Is Charged With Faking Her Own Abduction in 2016 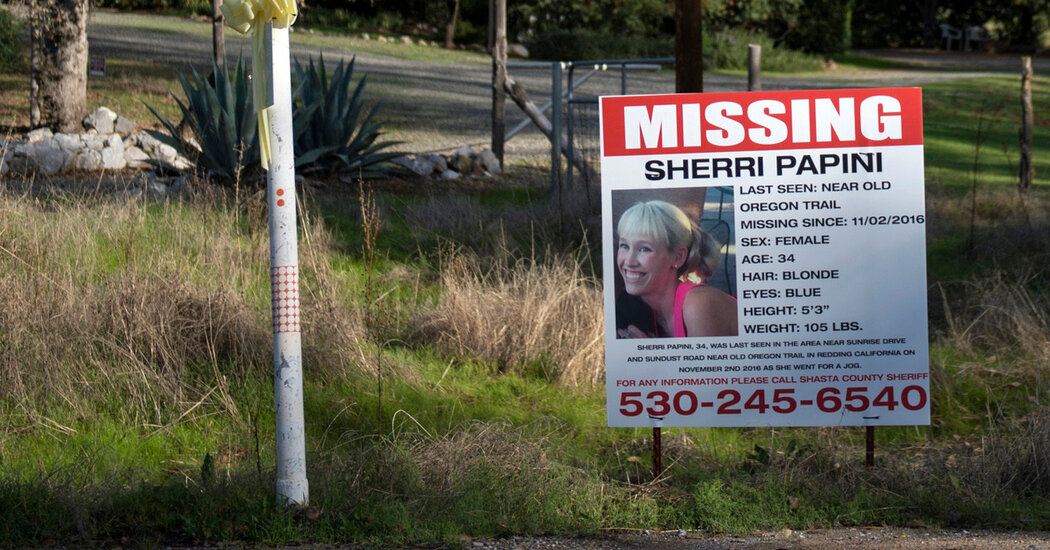 She said that her captors had leashed her to a pole inside a closet, a bucket of kitty litter serving as her toilet. Then came the beatings. And when she tried to escape, she told investigators, she was branded.

That is how Sherri Papini explained to investigators what happened during her disappearance in 2016, a three-week ordeal that prompted an intense and costly search across Northern California, where she had been living, and several other states.

The widely reported missing person case wound down after a truck driver spotted Ms. Papini wandering along an interstate, but the investigation was not over.

Federal prosecutors said this week that Ms. Papini’s claims that two masked women had abducted her at gunpoint while she was on a run in Redding, Calif., had been made up, and that she continued her deception when investigators confronted her.

In fact, prosecutors claim, Ms. Papini, who is married with two children, was staying with an ex-boyfriend and had used prepaid cellphones to arrange for him to whisk her some 600 miles away to his home in Southern California.

Her bruises and burns were self-inflicted, said prosecutors, who announced that Ms. Papini, 39, had been arrested on Thursday on felony charges that included making false statements to a federal law enforcement officer and mail fraud. The fraud charges stem from more than $30,000 in therapy and ambulance services that prosecutors said the California Victim Compensation Board paid for.

Michael L. Johnson, the Shasta County sheriff, said in a statement on Thursday that Ms. Papini had cost taxpayers more than $150,000 in resources used to investigate her claims and staged abduction.

“Not only did this charade take valuable resources away from real criminal investigative matters,” he wrote on Facebook, “but in a time where there is serious human trafficking cases with legitimate victims Sherri Papini used this tragic societal phenomenon to gain notoriety and financial gain.”

Prosecutors said that Ms. Papini had claimed that her kidnappers were part of a human-trafficking ring and had told her that she would be sold. “The buyer’s a cop. They’re never going to find you,” she claimed one of her captors told her, according to the criminal complaint.

In a statement released on Thursday by a public relations firm, the Papini family criticized the nature of the federal investigation and the tactics investigators employed in questioning Ms. Papini and her husband, Keith. The statement did not address whether Ms. Papini had faked her abduction.

“We love Sherri and are appalled by the way in which law enforcement ambushed her this afternoon in a dramatic and unnecessary manner in front of her children,” the family’s statement said. “Sherri and Keith have cooperated with law enforcement’s requests despite repeated attempts to unnecessarily pit them against each other, empty threats to publicly embarrass them and other conduct that was less than professional.”

The statement added that the family was “confused” by several aspects of the charges and was seeking clarification.

Prosecutors said that Ms. Papini’s ex-boyfriend, who was not identified, had admitted to taking part in the fake kidnapping. DNA found on Ms. Papini’s clothing led investigators to him, according to the criminal complaint. It matched the DNA of one of the ex-boyfriend’s parents, which had been collected for ancestry research.

Investigators said that the ex-boyfriend told them that Ms. Papini had instructed him to brand her with a tool for making crafts.

“When a young mother went missing in broad daylight, a community was filled with fear and concern,” Phillip A. Talbert, the U.S. attorney for the Eastern District of California, said in the statement announcing Ms. Papini’s arrest. “Countless hours were spent following leads, all in an effort to bring this woman back to her family.”

Prosecutors declined to comment further on the charges against Ms. Papini, who appeared in court on Friday. She was ordered detained as a danger and flight risk and her next court appearance is Tuesday. Her lawyer, Michael Borges, was not immediately available on Friday night.

Ms. Papini went for a jog on Nov. 2, 2016, according to the complaint. Her husband had returned home from work that day to find his wife was missing and that their children had not been picked up from day care. Using the Find My iPhone app, Mr. Papini located his wife’s phone and her earbuds, with strands of hair attached, about a mile from their home.

Mr. Papini made a public plea for his wife’s safe return. “Bring her home,” Mr. Papini repeatedly said in an interview with KRCR-TV, a local television station in Redding. “I’m coming, honey. I’m trying. I’m doing everything I can, and I love you.” A $50,000 reward was also offered.

Ms. Papini mysteriously turned up three weeks later on Nov. 24 in Yolo County, more than 140 miles south of where she had disappeared, the U.S. attorney’s office said. She had bindings on her body and had injuries, including a brand on her right shoulder. Ms. Papini told the authorities that she had been abducted by two Hispanic women and provided descriptions to an F.B.I. sketch artist.

The authorities in August 2020 again questioned Ms. Papini about her claim that she had been abducted, prosecutors said. She was presented with evidence that showed she had not been kidnapped and was warned that it was unlawful to lie to federal agents. Instead of retracting her story, Ms. Papini continued to make false statements, the authorities said.