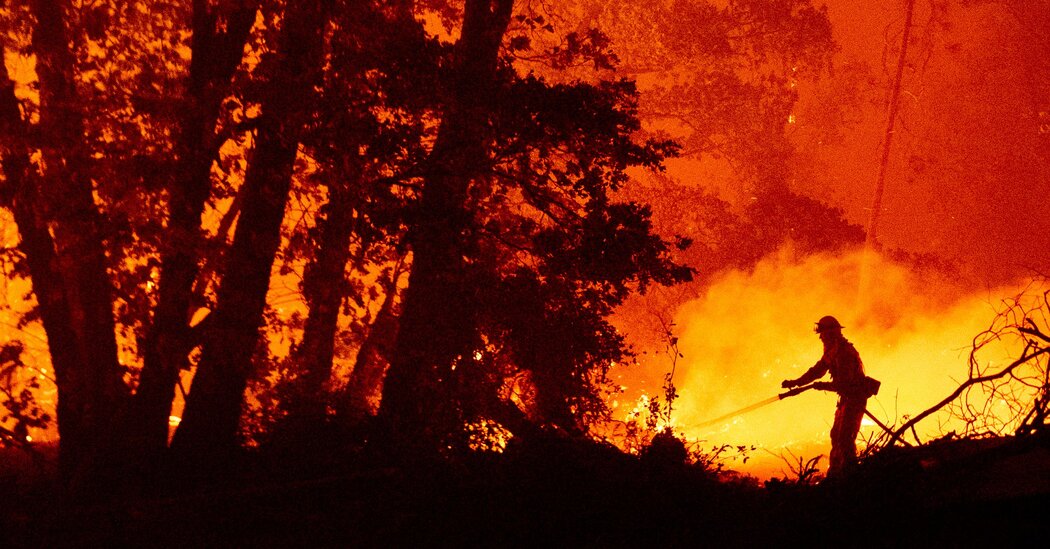 With extreme heat roasting California on Monday, fire crews faced another difficult day battling a rash of new wildfires that have burned homes, cloaked cities and forced thousands of people to flee.

The fires, burning from near the Mexico border to the forests of the Sierra Nevada, spread a curtain of smoke over much of the state, as meteorologists warned residents from Los Angeles to the San Francisco Bay Area to expect another day of oppressive heat and dangerously foul air.

A quick update from one of our short-term smoke models. Note that most of the smoke overhead is due to several wildfires in Northern California and the Central Valley, while smoke from the Dolan fire down in Big Sur is also picked up on this run. #CaliforniaWildfires pic.twitter.com/3KTa5wlLo5

The largest new wildfire, the Creek Fire, was burning out of control across 79,000 acres in Fresno County as of Sunday night. Residents and local fire officials said the blaze raged through canyons and destroyed much of the tiny community of Big Creek.

Chris Donnelly, the fire chief in nearby Huntington Lake, said that a former fire chief from Big Creek told him: “The town is gone.” Mr. Donnelly said it was difficult to get basic information about the progress of the fires.

“Cellphones are down, all the landlines are down,” Chief Donnelly said. “My assistant chief has to drive to the top of a ski lift in order to get a cell tower. It’s really hard to know what’s going on.”

The area is a popular summertime retreat of cabins, scout camps and campgrounds, but it turned into a fiery trap over the weekend. More than 200 people had to be rescued by air from the Mammoth Pool reservoir area. Chinook and Black Hawk helicopters plucked up the evacuees, about 20 of whom had suffered injuries including burns, broken bones and lacerations.

Another 20 people who were still waiting for rescue Sunday night were evacuated by ground crews from around the reservoir, Sheriff Tyson Pogue of Madera County said.

The fires have added to the pain of an already brutal wildfire season across the West. More than 1.6 million acres have burned in California alone.

Fire officials in Montana were trying to assess the damage of the Bridger Foothills Fire, which exploded over the weekend near Bozeman and burned at least 7,000 acres, destroying an as yet unknown number of homes.

Around Denver, ash fell from the sky on Sunday from a huge wildfire burning north of Rocky Mountain National Park, which forced park officials to close a popular sightseeing road. Hot, dry weather in the area was expected to give way to an early-season snowstorm on Tuesday, raised hope for some relief from the fires.