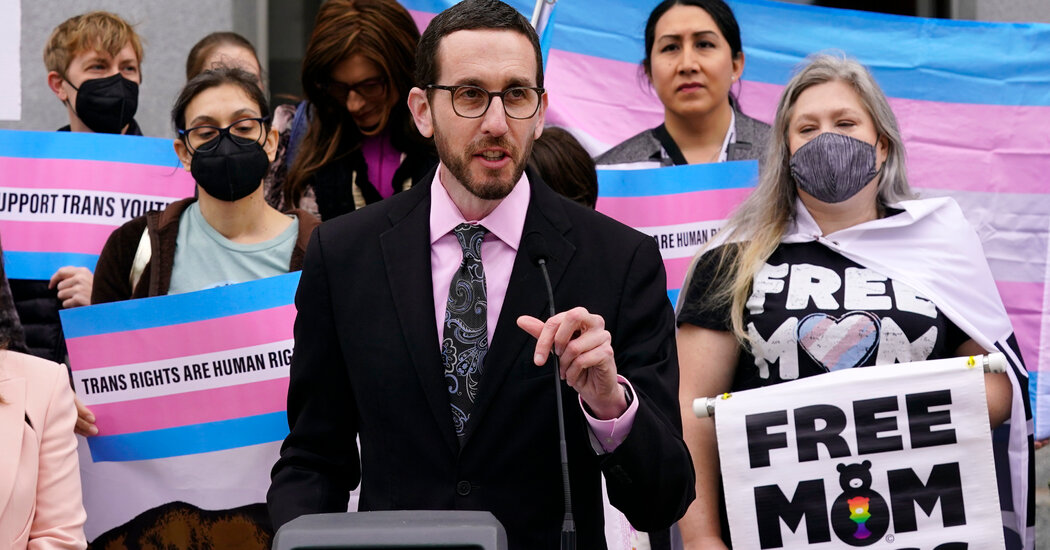 More than ever, California is positioning itself as a state that fights back.

Texas, Idaho, Arizona and a number of other conservative states this year have been moving forward with a suite of anti-abortion and anti-L.G.B.T.Q. legislation. Gov. Ron DeSantis of Florida on Monday signed a law opponents have called “Don’t Say Gay,” which prohibits classroom discussions in some elementary grades about sexual orientation and gender identity.

Here in California, Gov. Gavin Newsom has been vocal about his distaste for these laws. On Twitter, he invited Disney to brings its Florida work force to California, “the state that actually represents the values of your workers.” And in open defiance of a Texas abortion law that allows private individuals to sue abortion providers, he recently unveiled a proposal that would let residents sue gunmakers.

But there’s even more brewing in the State Legislature as California tries to position itself as a sanctuary for transgender youth and for people seeking abortions. I’ll walk you through the latest:

We’re in the midst of a nationwide wave of legislation seeking to restrict the rights of transgender youth.

Gov. Greg Abbott of Texas recently ordered the state to investigate parents for child abuse if they provide certain medical treatments to their transgender children. In Arizona, a bill is moving forward that would force teachers to disclose to parents if their children came out as L.G.B.T.Q.

Democratic lawmakers are proposing to make California a haven for transgender youth and their parents who are fleeing other states.

“They have a safe place to go if they’re threatened with prosecution,” State Senator Scott Wiener told The Associated Press. “California will not be a party to this new wave of deadly L.G.B.T.Q. criminalization.”

The bill would prevent California courts from enforcing any out-of-state court rulings that deny parents custody for allowing their trans children to get gender-affirming care. It would also prohibit California officials from complying with out-of-state subpoenas seeking medical information about people who travel to California for such care.

With the possibility of Roe v. Wade being overturned this year, conservative states are advancing new restrictions that aim to make abortion illegal in as many circumstances as possible.

California leaders are trying to make the state a sanctuary for those seeking reproductive care. (Washington and Oregon are also taking steps to make those states more friendly to those seeking abortions.)

Newsom signed a bill last week that would make abortions cheaper for people on private insurance plans. California legislators are anticipating that restricted access to abortion in other states will lead to more women coming to the Golden State for procedures.

A number of related proposals are also under consideration in California: banning the disclosure of abortion medical records to the police or other out-of-state entities; allowing nurse practitioners to perform abortions; and setting up a fund to help pay for people to get abortions, including assistance with travel and lodging.

“This legislative package is robust, it’s bold, it’s responsive and it’s innovative, and that’s exactly what we need right now,” Amy Moy, chief external affairs officer for Essential Access Health and a member of the steering committee for the Future of Abortion Council, told The Associated Press.

﻿“Unlike that foggy city across the bay, Oakland has fabulous weather where succulents, natives, roses, and tomatoes thrive. It has a gorgeous waterfront where FDR’s yacht is docked next to ferries that can whisk you away to that other city across the bay and bring you back again. Its magnificent port plays a vital role in international commerce and features astounding cranes that tower over its shoreline.

In Oakland, you can enjoy a walk in the redwoods in Aurelia Henry Reinhardt Redwood Park, smell the roses at the Morcom Rose Garden, and stroll around Lake Merritt. In Joaquin Miller Park, you can hike beautiful trails, ride your mountain bike, and see plays under the stars at the amphitheater there.”

18 new works of fiction to read this spring.

The world’s largest wildlife crossing is coming to Southern California.

Groundbreaking is set for next month on a bridge that will cross the 101 Freeway in Agoura Hills and provide mountain lions, coyotes, snakes and other creatures more room to roam, The Associated Press reports.