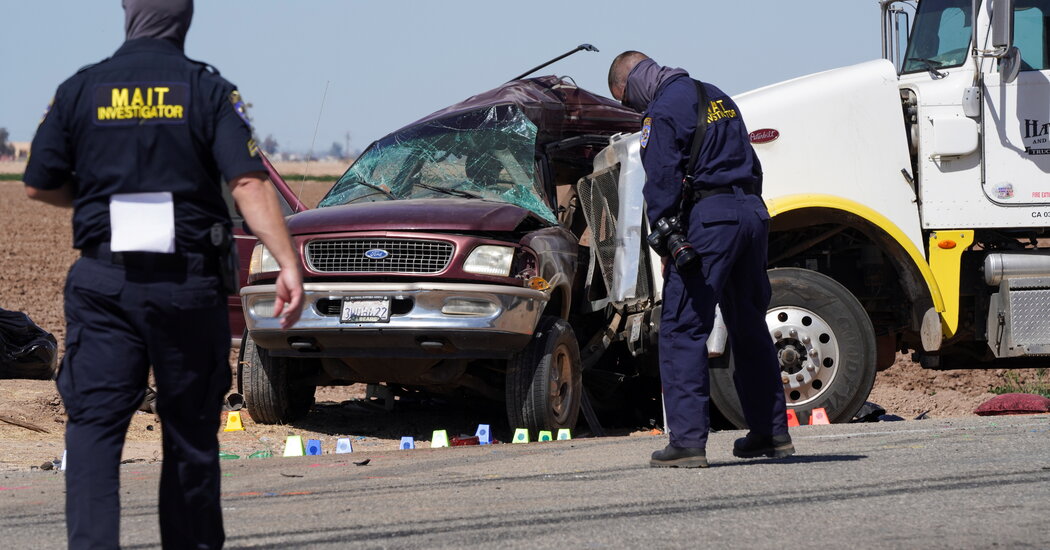 Assemblyman Eduardo Garcia, whose legislative district includes the scene of the crash, said the tragedy was just the latest sign of the ways in which people in the area, and across the border with Mexico, were struggling.

“How we prevent an accident like the one today is clearly by improving the quality of life for folks, so that they’re not having to travel in a vehicle with 20-plus people in it,” Mr. Garcia said in an interview.

Even before the pandemic, he said, the region’s unemployment rate was as much as four times the state average.

“The same people that we are relying on and counting on to make sure that our food supply is met, these are the same folks that probably lost their life today,” he said.

Arrests of unauthorized immigrants, considered a key indicator of illegal border crossings, have been steadily climbing in recent months. In April 2020, early in the Covid-19 pandemic, the Border Patrol apprehended only 17,106 people. Last month, agents intercepted 78,323, compared with 36,585 in January last year.

About 800 Border Patrol agents work in the vast El Centro Sector, which runs about 70 miles across the valley. Former President Donald J. Trump visited the area to tout a new border barrier — a row of 30-foot-tall, slender steel slats with pointed edges. That has created more business for smugglers who are hired for thousands of dollars to guide migrants through rugged terrain to reach the United States.

During the pandemic, the El Centro hospital, which has a 20-bed intensive-care unit, has been overwhelmed with ailing local residents, as well as Americans and U.S. green card holders fleeing overcrowded clinics and hospitals in Mexicali, a city of 1.1 million on the other side of the border. El Centro, the largest city on the U.S. side, has a population of about 45,000.

Macario Mora, a spokesman for Customs and Border Protection in Yuma and El Centro, said the agency was assisting other law enforcement officials with the investigation of Tuesday’s crash. He said the immigration status of those in the vehicle was unknown and was still under investigation by the California Highway Patrol.