California gubernatorial candidate Caitlyn Jenner covered a range of issues Friday night in her first interview with a TV reporter from the state.

She has previously done several national interviews, including with Fox News.

“I think I’ve been preparing for this moment pretty much all my life,” Jenner, a former Olympian and reality TV personality, told Elex Michaelson of FOX 11 in Los Angeles on the political program “The Issue Is.”

“I was the first American to put the American flag up – this is our bicentennial year – at the finish line, so proud to be an American, proud to bring the gold medal back to California,” she said of her 1976 Olympic Decathlon win at the Summer Games in Montreal.

Jenner said that since she moved to California in 1973 she has seen the state decline and watched friends leave.

“I’ve lived in Malibu really since 1976, honestly, I don’t want to leave. I want to be an example to so many people that, you know, if you don’t like what’s going on, stand up, and I’m willing to stand up,” she said.

“I want to be an example to so many people that, you know, if you don’t like what’s going on, stand up, and I’m willing to stand up.” 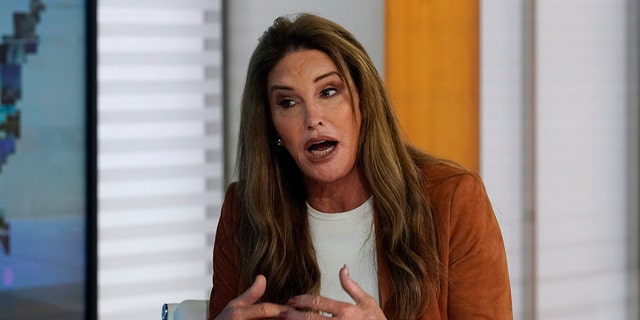 She said she felt she wouldn’t have been able to run for governor before she came out as transgender because she was still figuring herself out.

The interview covered homelessness, education, voting and the budget, among other topics, but Jenner often wasn’t full of specifics in response to the interviewer’s pointed questions.

Jenner told Michaelson the main problem with homelessness was too many regulations that make it difficult to build affordable housing and said as governor she would work with charities to get people housed.

When asked about homeless living in tents, which fellow gubernatorial candidate Kevin Faulconer banned on San Diego sidewalks while he was mayor, she agreed they were a problem.

“When you drive in Beverly Hills and you look at the park, and there’s tents in the park, we have to look at that issue very seriously,” she said. “But to be honest with you on a big picture, living in a tent in a park in Beverly Hills, it’s just different today. Before, the homeless were all downtown. I’m sure you’ve been downtown. I mean, you walk down there, and it’s just like so tough, so difficult on these people.”

“When you drive in Beverly Hills and you look at the park, and there’s tents in the park, we have to look at that issue very seriously.”

And despite Gov. Gavin Newsom’s historic $12 billion package aimed at the crisis, Jenner said the Democrat is “not getting anything done, he’s a politician.”

Jenner added that she would be unencumbered by political concerns if elected because she doesn’t “owe one favor to one special interest group in Sacramento.”

She also accused Newsom of playing politics in his decision to send stimulus checks to Californians while he’s facing a recall, calling them “recall rebates” – although Michaelson said that returning money to residents when there’s a budget surplus is required by law.

Jenner also clarified confusion around whether she voted in 2020 after she said she didn’t vote last November in a recent CNN interview but public records showed she had.

“It was mail-in balloting, and there were, you know, a couple of people at the house and we’re all sitting around, ‘Oh, should we do this?’ And I’m pretty sure [the ballot] was probably sent in,” she explained. “I didn’t do it the old-fashioned way, I’m an old fashioned person, you know, common sense. I like going sitting there in the little booth and banging away.”

On voting rights and security, she said she wanted to make it easier for Californians to vote and harder to cheat so more residents would participate.

Michaelson noted, however, that the state had record turnout in 2020 – more than 70%. In California, a mail-in ballot is sent to every resident who’s registered to vote.

Jenner was also asked who she would choose to replace U.S. Sen. Dianne Feinstein, D-Calif., if Jenner became governor and Feinstein – who will turn 87 later this month – were to retire.

The candidate said she would pick the most qualified person – whether it was a Republican or a Democrat.

“I don’t care if you’re Republican, Democrat, Libertarian, vegetarian, it doesn’t make any difference to me,” Jenner said. “I am an inclusive Republican, I’m very different than what you think of as most Republicans. I’m not in this little box because you think, ‘Oh my gosh, you’re a Republican, you have to think this way.’ Just look at me. … I am that poster child for change.”

“I don’t care if you’re Republican, Democrat, Libertarian, vegetarian, it doesn’t make any difference to me. I am an inclusive Republican.”

She added that coming out as transgender has made her aware of the struggles that others face, saying that her faith has led her through her own challenges and she believes maybe she was destined to be a public figure so she could help people.

“Maybe I can make a difference,” she said. “I can bring something special.”

Newsom’s nearly certain recall election – which was prompted by criticism of his handling of the coronavirus pandemic – is marking Jenner’s first run for office.

Several other prominent Republicans, including Faulconer and businessman John Cox, who ran against Newsom in 2018, are also bidding for the governorship.

A recent poll though found Jenner to have support from only 6% of voters.