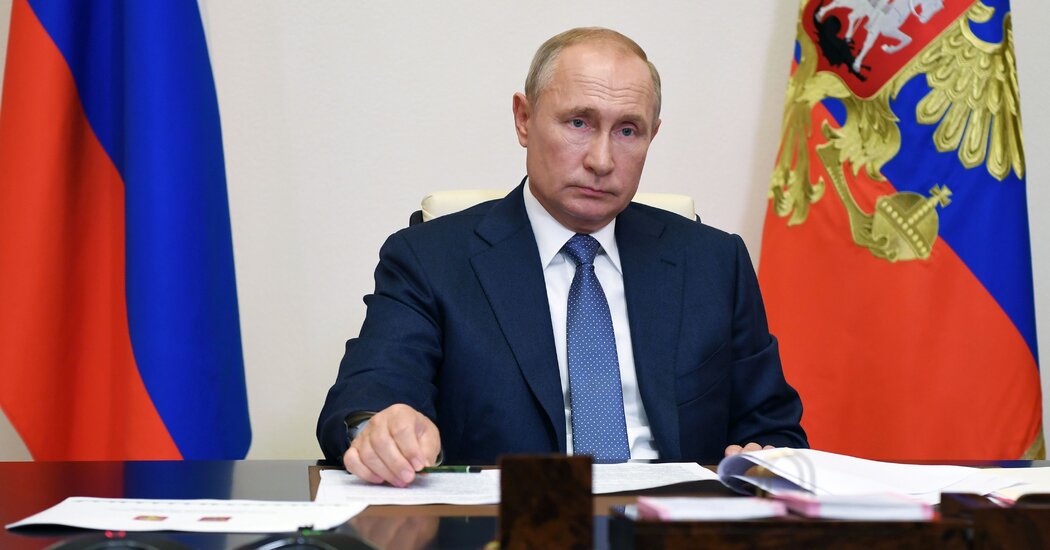 WASHINGTON — President Vladimir V. Putin of Russia is most likely continuing to approve and direct interference operations aimed at raising President Trump’s re-election chances, a recent C.I.A. analysis concluded, a signal that intelligence agencies continue to back their assessment of Russian activities despite the president’s attacks.

The assessment was disseminated in support of sanctions imposed this month on Andriy Derkach, a pro-Russian Ukrainian lawmaker who has spread information critical of Vice President Joseph R. Biden Jr. It is consistent with intelligence officials’ warning to lawmakers in January that Russia was interfering on Mr. Trump’s behalf, a briefing that outraged Republicans and eventually helped oust Joseph Maguire from his post as acting director of national intelligence.

The C.I.A. has moderate confidence in its analysis, a lower degree of certainty than its 2016 assessment of Mr. Putin’s preferences, in part because the intelligence community appears to lack intercepted communications or other direct evidence confirming his direction of Mr. Derkach’s efforts. Mr. Putin, a former intelligence agent, is careful not to use electronic devices.

According to people familiar with the matter, the new analysis was published ahead of the sanctions in the C.I.A. Worldwide Intelligence Review, a classified document that circulates to members of Congress and the Trump administration. The Washington Post earlier reported the assessment.

Mr. Putin’s direction, national security officials have said, should be of little surprise. Russia has become an authoritarian country under him, and little in its foreign affairs occurs without his knowledge or blessing, American officials have repeatedly said.

Russian efforts to influence American politics have continued steadily since 2016, even if the volume of disinformation has ebbed and flowed. But the C.I.A.’s lower level of confidence in the new assessment allows Mr. Trump and his allies to treat the allegations of Mr. Putin’s involvement as unproven.

For years, many Republicans have taken issue with the C.I.A. analysis of Russian interference. John Ratcliffe, the director of national intelligence, who was an outspoken supporter of Mr. Trump while a member of Congress, and other Republicans have argued that Mr. Putin’s goal is to sow chaos, not to favor one candidate over another.

And Mr. Trump himself remains hostile to arguments that Russia is intervening to support him. After the F.B.I. director, Christopher A. Wray, testified last week that Russia was trying to sow discord in the United States and “denigrate Vice President Biden,” Mr. Trump chastised him publicly, saying he should have also emphasized China’s election interference efforts.

But intelligence officials said there is little doubt that Mr. Putin is broadly orchestrating Russian campaigns and has continued to allow his intelligence operatives to try to influence American politics.

The key questions that American intelligence agencies have not answered are the extent of Russia’s effort and how open Mr. Putin wants to be about it.

Mr. Evanina was set to brief members of Congress’s intelligence committees this week. Mr. Ratcliffe had sought to block in-person testimony to Congress, citing leaks. But faced with criticism from Republicans and Democrats, Mr. Ratcliffe modified his position to block only all-member briefings.

Some officials have said the recent C.I.A. assessment demonstrates that the agency remains willing to push intelligence that Mr. Trump disagrees with. His administration has also taken action to try to raise awareness of Russian activities.

The Treasury Department on Sept. 10 described Mr. Derkach as “an active Russian agent” with ties to Moscow’s intelligence services and said he was involved in efforts to influence elections. He released doctored tapes of Mr. Biden that American officials have said were edited to mislead the public.

American intelligence agencies have tried to track his efforts to push information critical of Mr. Biden to lobbyists and members of Congress, information that was included in the C.I.A. assessment, according to a person familiar with the matter. Mr. Derkach denies that he works on behalf of Russia.

The president has pushed various theories about Ukrainian involvement in the 2016 election and has supported efforts to raise questions about the work Mr. Biden’s son did for a Ukrainian energy company, namely a Senate investigation led by Senator Ron Johnson, Republican of Wisconsin, that Democrats have warned is the target of Russian disinformation.

Mr. Biden’s campaign has criticized Republicans in Congress for investigating his ties to Ukraine and his son’s work for the energy company. On Tuesday, Andrew Bates, a Biden spokesman, said some members of Congress “have chosen to be accessories to foreign influence operations” and attacked Mr. Trump’s Russia policy.

“As Joe Biden has said for months, it is absolutely clear who Vladimir Putin wants to win this election — because Donald Trump’s foreign policy has been a gift to the Kremlin,” Mr. Bates said.

Rudolph W. Giuliani, the president’s personal lawyer who has led the efforts to gather information about Mr. Biden’s work in Ukraine, has taken information from Mr. Derkach. However, the recent C.I.A. analysis did not cite Mr. Giuliani by name, according to a person familiar with the matter.