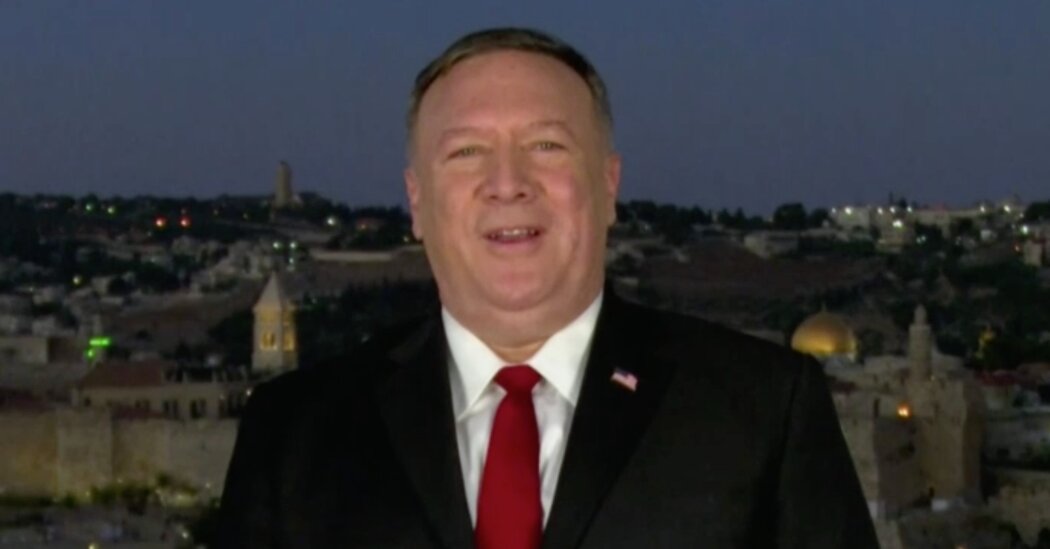 Two law professors, including one who served as President George W. Bush’s ethics adviser, have filed a complaint to the U.S. Office of Special Counsel accusing Secretary of State Mike Pompeo of violating federal laws by addressing the Republican National Convention while on a diplomatic trip overseas.

The complaint, filed on Wednesday, asserts that Mr. Pompeo “abused his office” by taping his nearly four-minute speech from Jerusalem, where he met on Monday with Prime Minister Benjamin Netanyahu and other Israeli officials.

The address, which aired on Tuesday night, showed the city’s holy sites over Mr. Pompeo’s shoulder as he praised President Trump’s foreign policy and endorsed his re-election.

The complaint said there was no evidence that the Republican Party or the Trump campaign had covered the cost of flying Mr. Pompeo and State Department staff members to Jerusalem on a government jet.

“Rather, to the best of our knowledge, the entire cost of the trip was paid for by U.S. taxpayers,” wrote the professors, Claire O. Finkelstein of the University of Pennsylvania and Richard W. Painter of the University of Minnesota, who was Mr. Bush’s chief ethics lawyer from 2005 to 2007.

The complaint adds: “Transporting a government official to any location to take advantage of a unique setting for a campaign photo or video is itself a misappropriation of government funds and a violation of the Hatch Act,” which bars federal employees from engaging in political activities while on the job.

Representative Joaquin Castro, Democrat of Texas and chairman of a House subcommittee that oversees the State Department, has opened an inquiry into Mr. Pompeo’s appearance.

The State Department has said that several lawyers reviewed Mr. Pompeo’s plans to address the political convention and found no legal problem with doing so. Officials also said no department resources were used to film the speech.