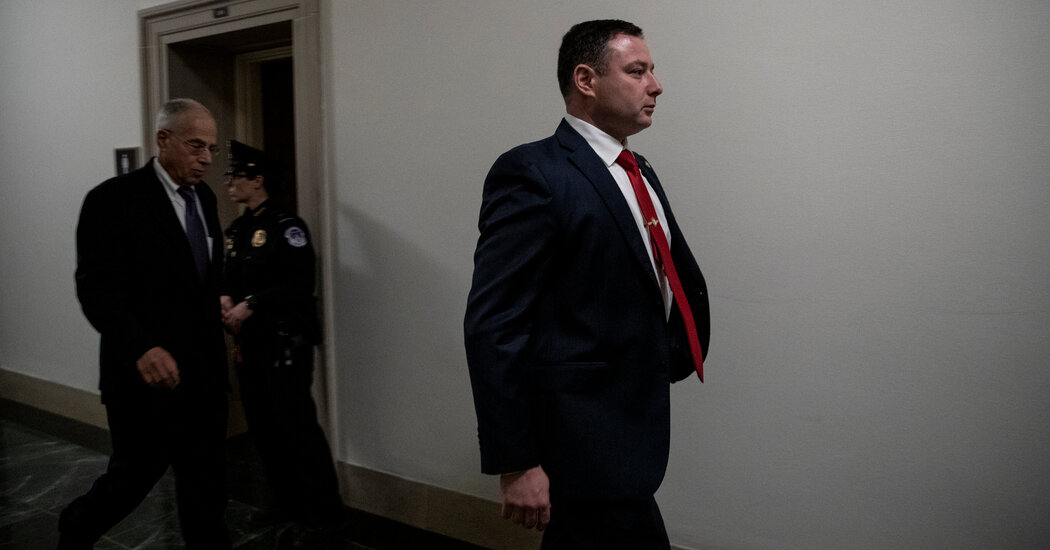 Lt. Col. Yevgeny Vindman, an Army officer dismissed from the White House earlier this year, filed a whistle-blower complaint last week claiming that he was improperly fired in retaliation for both his role in the impeachment of President Trump and lodging previously undisclosed allegations of ethical and legal wrongdoing against Robert C. O’Brien, the national security adviser.

The complaint, which surfaced on Wednesday when House Democrats demanded that an independent government watchdog investigate, added fresh detail to the saga of the Vindman brothers, who together raised concerns about a July 2019 call between Mr. Trump and the president of Ukraine, the core of the impeachment proceeding against the president. Both were marched out of the White House days after the impeachment trial concluded.

Lt. Col. Alexander S. Vindman, who testified in the impeachment inquiry, retired from the Army this summer amid what his lawyers called a campaign of White House intimidation and retaliation. His retirement prompted House Democrats to demand an inquiry by the Pentagon’s top investigator, and on Wednesday, they renewed those calls in a letter to the inspector general, citing Yevgeny Vindman’s Aug. 18 complaint.

In the letter, four Democratic committee leaders revealed for the first time that before he was fired last winter, Yevgeny Vindman, then a top ethics lawyer detailed to the National Security Council from the Pentagon, had raised ethical and legal concerns about Mr. O’Brien and one of his top deputies. Colonel Vindman was also investigating reports that Mr. O’Brien had made sexist and demeaning remarks to female staff members and excluded them from meetings.

The lawmakers wrote that it was urgent that the inspector general investigate whether the actions against the Vindmans “were carried out in retaliation for their protected disclosures, and that your investigation include a close examination of actions taken by White House officials.”

The complaint Yevgeny Vindman filed with the inspector general last week laid out extensive new detail about the year leading up to his and his brother’s unceremonious removal from the White House staff.

Though the Democrats quoted from the complaint in their letter, they declined to share it in full. The New York Times obtained a copy of the document.

The 32-page complaint outlines a half-dozen times that Colonel Vindman reported various legal and ethical concerns to superiors at the National Security Council and Defense Department between July 2019 and February 2020 in communications that his lawyers argue meets the criteria for protection from reprisal. It discloses for the first time that Colonel Vindman repeatedly raised concerns about Mr. O’Brien and Alex Gray, the National Security Council chief of staff, to top White House lawyers.

In the fall of 2019, for example, Colonel Vindman flagged that a planned trip by Mr. O’Brien to Brigham Young University in Utah “was unusual and not sufficiently official in nature.” Mr. O’Brien planned to bring along his wife at government expense, the complaint says, and address an Air Force Reserve Officers’ Training Corps unit of which his daughter was a member.

He was told Mr. O’Brien and Mr. Gray had directed aides to use “official time for personal errands including scheduling haircut appointments, retrieving personal luggage and to coordinate personal dinner arrangements.”

In January, not long before he was fired, the complaint said, Colonel Vindman spoke with a colleague detailed to the White House from the Defense Department who claimed that Mr. O’Brien and Mr. Gray “engaged in demeaning and demoralizing sexist behavior against her and multiple other female N.S.C. professionals.” She told him the men commented inappropriately on their looks, talked down to them and left them out of key meetings, and shared accounts from several senior aides.

Dwrena Allen, a spokeswoman for the inspector general, said he had received the Democrats’ letter requesting an investigation and was reviewing it.

Alyssa Farah, a White House spokeswoman, called Colonel Vindman’s claims “ridiculous and false.” She said Mr. O’Brien’s National Security Council had the most female senior leaders ever, and accused Colonel Vindman of making “attempts to retaliate against his former supervisors for providing an accurate assessment of his performance.”

“These allegations are an example of precisely what’s wrong with Washington — a junior-level disgruntled former detailee, with whom Ambassador O’Brien had almost no interaction, can launch baseless attacks for partisan purposes,” she said.

Yevgeny Vindman never testified before impeachment investigators in the House, but he appeared in person to support his brother, a Ukraine expert for the National Security Council, as he delivered a scathing public account. The brothers also privately raised concerns with top White House lawyers about Mr. Trump’s conduct on the infamous Ukraine call, in which the president pressured the country’s leader to conduct investigations that would benefit him politically.

The account by Yevgeny Vindman, who is still an active-duty officer, surfaced as the White House is once again under scrutiny for openly flouting ethical requirements and the government norms that were carefully followed by previous administrations. It was only the latest reminder of how, despite Mr. Trump’s impeachment, he has continued to blow past such rules and customs — including efforts to avoid even the appearance of reprisals — more or less without consequence.

The best-known episode detailed in the complaint, which earned the brothers Mr. Trump’s scorn when it became public, came immediately after the president’s Ukraine call. Both brothers raised concerns about the contents of the call and the preservation of a transcript of it to John A. Eisenberg, the National Security Council’s top lawyer. Yevgeny Vindman then followed up with conversations about their legal obligations, including whether Mr. Trump violated the law.

But some of the concerns had nothing to do with the president. The filing said Colonel Vindman had taken issue with meetings that Mr. O’Brien held with the leader of SpaceX and a member of the Postal Service’s board of governors.

Over time, the complaint says, Colonel Vindman was slowly relieved of his responsibilities, barred from attending meetings with Mr. O’Brien and other top officials, given a poor performance review and finally subject to “unwarranted and ignominious removal from his career-enhancing position of trust and responsibility at the White House.”

In an introduction, Colonel Vindman’s lawyers called his one of “the clearest and highest-profile cases of whistle-blower reprisal in American history.”

“White House officials took adverse personnel actions against him in retaliation for reporting waste, fraud and abuse to his chain of command, as required by executive order, D.O.D. regulations and the Army values,” they wrote.