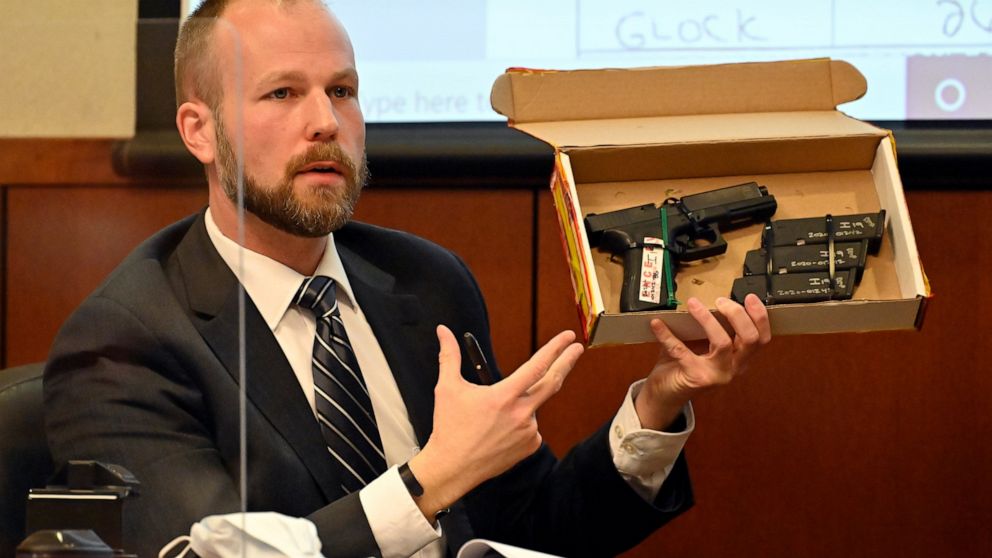 LOUISVILLE, Ky. — Breonna Taylor’s next-door neighbor said she was jolted from sleep by the sound of a battering ram as gunfire ripped into her apartment the night of the raid that left Taylor dead.

Chelsey Napper, who was pregnant at the time, called 911 twice after bullets pierced a wall she shared with Taylor and shattered her apartment’s glass patio door.

“It was so scary and crazy I didn’t know what was going on,” Napper testified. She lived in the apartment with her boyfriend and her 5-year-old son.

It “sounded like somebody set off a bomb or something” outside their apartment, she testified.

The bullets were fired by former Louisville police detective Brett Hankison, who is on trial on charges of endangering Napper, her boyfriend, Cody Etherton, and her son. Next door, Taylor had been fatally shot in her hallway by two other officers. No police were charged in the Black woman’s death.

Napper’s testimony on Tuesday afternoon concluded the case by prosecutors, who called dozens of witnesses over five days. Hankison is expected to testify in the trial on Wednesday.

Napper said she and Etherton were stuck for hours in the apartment and at one point police aimed guns at Etherton when he looked out the shattered glass door. She said she learned days later that it was the police who shot into their apartment and a battering ram knocking down Taylor’s door that had startled her.

Hankison was fired by police officials months after the early morning narcotics raid of March 13, 2020, for firing “blindly” into Taylor’s apartment. He fired 10 shots, though none hit Taylor, who was also laying in bed when the police arrived at her door.

Hankison is charged with three counts of wanton endangerment, a felony with a sentencing range of one to five years.

A police firearms instructor testified on Tuesday that Louisville officers are trained to identify a target before firing weapons in a threatening situation. Matt Gelhausen said officers are taught to make sure a perceived threat is isolated “from any others that are in close proximity.”

Hankison’s attorney has argued that Hankison moved away from Taylor’s door, rounded a corner and fired shots into Taylor’s glass door to “defend and save the lives of his fellow officers.” Hankison told investigators about two weeks after the raid that he thought he saw a person with a long gun or AR-15 rife inside Taylor’s apartment. That interview with Louisville police investigators was played for the jury last week.

Only Taylor’s boyfriend’s handgun was found in the apartment. The boyfriend, Kenneth Walker, and Taylor’s mother, Tamika Palmer, were in the courtroom Tuesday along with other family members.

Walker told investigators after the shooting that he thought an intruder was breaking into the apartment. Police used a battering ram to take down the door and Walker’s bullet hit former police Sgt. Jonathan Mattingly in the leg. After Walker’s shot, Mattingly and another officer, Myles Cosgrove, opened fire into the apartment, but struck Taylor. Walker was not hurt.

Hankison told investigators in the March 2020 interview that he looked inside once the door came down and thought he saw “a figure in a shooting stance.”

Jurors on Tuesday also heard excerpts from Cosgrove’s 2021 deposition in a civil suit filed by Walker. Cosgrove and Mattingly have invoked their right not to testify at trial because of a pending federal investigation.

During opening statements last week, prosecutors emphasized to jurors that the case is not about the killing of Taylor or police decisions that led to the raid. They said the focus should be on Hankison’s shots and the near harm they caused.

Jurors visited Taylor’s former apartment last week and heard testimony from several officers who were at the scene that night.