Bradford Freeman, Last of the ‘Band of Brothers,’ Dies at 97 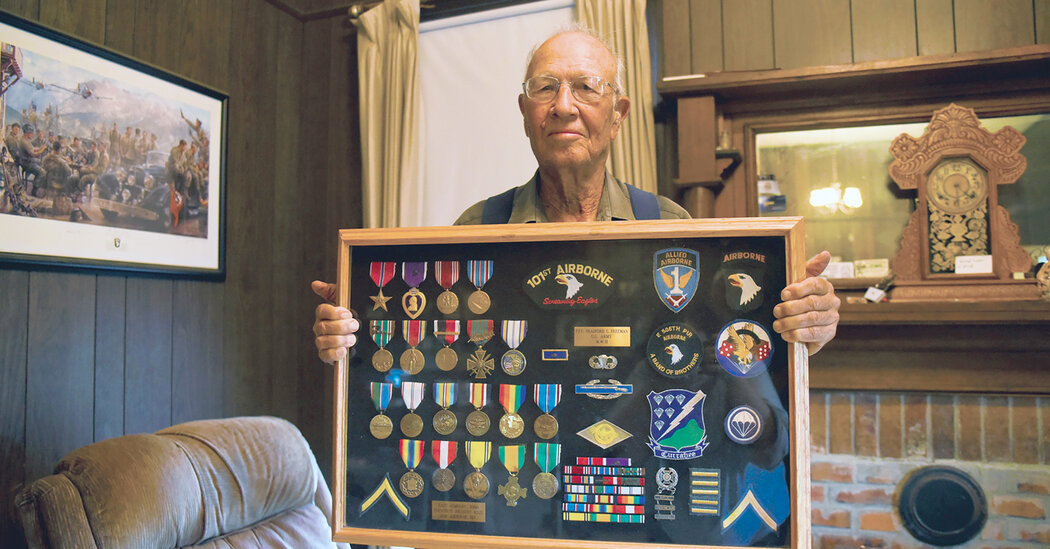 Bradford Freeman, the last survivor of the World War II paratroop company whose combat exploits were described in the best-selling book and subsequent mini-series “Band of Brothers,” died on Sunday in Columbus, Miss. He was 97.

His death, in a hospital, was announced by his family through the Lowndes Funeral Home in Columbus.

Mr. Freeman was a private first class assigned to a mortar squad in Easy Company, Second Battalion, 506th Parachute Infantry Regiment, 101st Airborne Division. He took part in the unit’s jump behind Utah Beach in the D-Day invasion of Normandy on June 6, 1944, carrying an 18-pound mortar plate strapped to his chest. Landing in a pasture filled with cows, he helped a fellow soldier with a broken leg hide before joining the rest of his squad.

He fought with Easy Company in its battles with the Germans in France, its parachute drops into the German-occupied Netherlands and the Battle of the Bulge, in bitter cold and snow.

He was unscathed in the fighting at the Bulge’s strategic town of Bastogne, Belgium, but he was wounded at nearby Noville in mid-January 1945. “A Screaming Mimi came in howling and it exploded in my leg,” he told the American Veterans Center in an April 2018 interview, referring to the nickname given by G.I.s to the Germans’ devastating multiple rocket launchers. He returned to Easy Company in April 1945 and participated in its occupation of Berchtesgaden, Hitler’s abandoned mountain retreat near the Austrian border, and then in the occupation of Austria.

He was discharged along with the remainder of Easy Company in November 1945.

Bradford Clark Freeman was born on Sept. 4, 1924, in Artesia, Miss., one of eight children of Erwyn and Ollie Freeman. He was a student at Mississippi State University when the United States entered World War II; he joined the Army in December 1942 and went overseas with the 101st Airborne early in 1944.

The historian Stephen E. Ambrose interviewed veterans of Easy Company for his book “Band of Brothers” (1992), its title taken from Shakespeare’s “Henry V,” in which the king, in a St. Crispin’s Day oration, seeks to inspire his troops to defeat the French in the battle of Agincourt:

“We few, we happy few, we band of brothers;/For he to-day that sheds his blood with me/Shall be my brother.”

Tom Hanks and Steven Spielberg created the Emmy-winning 10-part mini-series “Band of Brothers,” based on Mr. Ambrose’s book, which was seen on HBO in the autumn of 2001. Mr. Freeman was portrayed by the actor James Farmer in a nonspeaking role.

Following the war, Mr. Freeman graduated from Mississippi State and worked as a letter carrier for 32 years. He married Willie Louise Gurley in 1947; she died in 2008.

Mr. Freeman, who lived in Caledonia, Miss., is survived by his daughters, Beverly Bowles and Becky Clardy; his sister, Claydeen Allen; four grandchildren; and 10 great-grandchildren.

Edward D. Shames, the last surviving officer of the Band of Brothers, died in December 2021 at 99.

“My folks didn’t seem much interested in what we did in the war,” Mr. Freeman told The Commercial Dispatch of Columbus, Miss., in 2016. “So we didn’t talk about it too much.”

He said that inquiries about his service were sporadic — even after the book“Band of Brothers” was published and the mini-series was aired — until 2008, when Valor magazine arranged for Mr. Freeman and other members of Easy Company to travel to England for a ceremony at Buckingham Palace.

Mr. Freeman returned to Normandy in 2019 as an honored guest for the 75th anniversary of D-Day, and in May 2021, in a ceremony on his lawn, he received a framed, autographed photo and a coin honoring his service from Gen. Mark Milley, the chairman of the Joint Chiefs of Staff.

“This is a surprise to me,” he told the gathering. “I don’t know how to tell you how I appreciate it, but I didn’t do anything that I wasn’t expected to do. I just listened to my officer and did what he said.”