Blinken Arrives in Poland to Gauge Additional US Aid for Ukraine 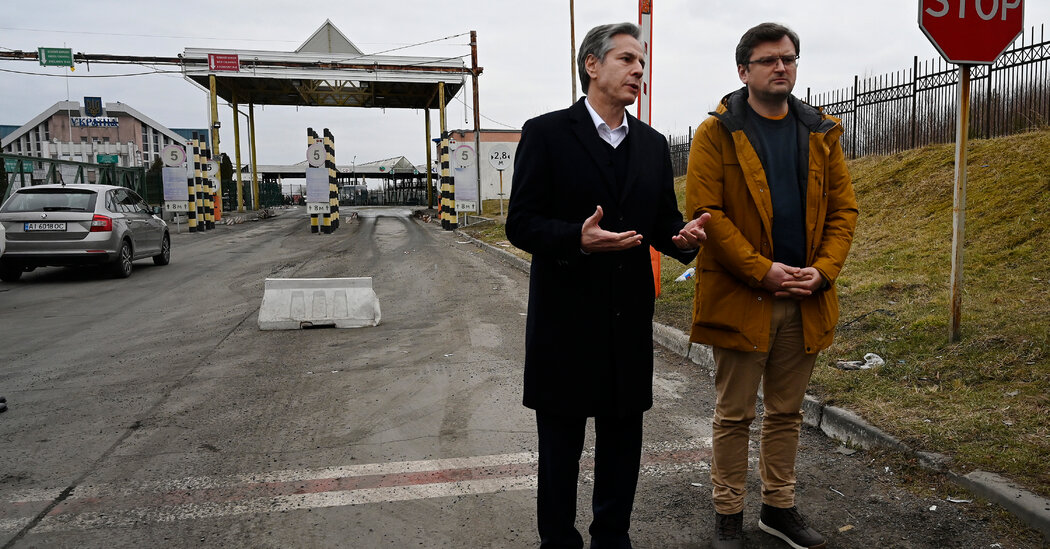 KORCZOWA, Poland — With a line of refugees streaming into Poland behind them, the top American and Ukrainian diplomats met at Ukraine’s border on Saturday in a brief but extraordinary encounter to assess what additional support and protection the United States might deliver to address Russia’s invasion, which appeared certain to continue.

The Ukrainian foreign minister, Dmytro Kuleba, thanked U.S. Secretary of State Antony J. Blinken for “coming here to Ukraine, literally.” The two men stood at the border where, over the course of one hour, hundreds of refugees had crossed into Poland by foot in bone-chilling temperatures.

For Mr. Blinken, the brief meeting was a chance to take stock of the humanitarian disaster — Europe’s largest refugee crisis since World War II — caused by the Russian president, Vladimir V. Putin, in his invasion of Ukraine.

For Mr. Kuleba, it was a moment to remind the world anew, in stark terms, of the possibility of an enduring conflict with high numbers of human casualties and the rupture of the global order if foreign assistance stopped short of what Ukraine was demanding.

“Ukraine will win this war,” Mr. Kuleba said after the meeting, which was kept secret for several hours after it had concluded to ensure he could safely travel back into Ukraine. “The question is the price of our victory. And if our partners continue to take bold, systemic decisions to step up economic and political pressure on Russia, if they continue to provide us with necessary weapons, the price will be lower.”

“This will save many lives in Ukraine, many houses; many children will be born, many sufferings will be avoided,” he said. “This is the only question that is on the agenda.”

Mr. Blinken said the Biden administration was seeking to send at least $2.75 billion in additional humanitarian assistance to Ukraine and to the countries that have taken in its more than one million refugees so far. “We’re in it with Ukraine — one way or another, short run, the medium run, the long run,” he said, adding that he was “in awe” of the Ukrainian resistance against Moscow’s far larger military.

But Mr. Kuleba called again for NATO forces to impose a no-fly zone over Ukraine to protect it from Russian bombings — a move that the Biden administration and its allies worry would pull them into a larger war.

The global pressure on Russia to stand down — backed by devastating economic sanctions against Mr. Putin’s government and its allies and by shipments of weapons and military equipment to Kyiv — “will not only continue, it will grow until this war of choice is brought to an end,” Mr. Blinken said. He said the United States and its allies “are, again, looking at everything” to support Ukraine.

“The world is here; the world is with you,” Mr. Blinken told Mr. Kuleba.

Mr. Blinken has repeatedly noted the increasing number of deaths in Ukraine, sometimes describing them in graphic terms, over the past few days to underscore the war to Americans who may largely feel untouched by its violence. He witnessed its despair firsthand on Saturday at the border crossing, where the sounds of crying babies and truck engines punctuated an otherwise stunned silence among most of the arriving refugees, who shivered as they were led in small groups by border guards to a processing center just inside Poland.

The Polish foreign minister, Zbigniew Rau, estimated that as many as one million refugees from Ukraine would have fled to Poland alone by the end of this weekend. As of Saturday afternoon, that number stood at 700,000 and many of those who fled arrived at the Korczowa-Krakovets crossing. In all, more than 1.3 million refugees have left Ukraine for neighboring nations as of Friday.

The line of Ukrainians trudging into Poland included refugees leading children by the hand or carrying a lone backpack or suitcase stuffed with their belongings.

“We walked to the border, I don’t know how many hours,” said one 12-year-old girl, Venera Ahmadi, whose family left Kyiv after “we heard bombs” and were staying at a nearby refugee reception center in Korczowa.

“I was scared I would die,” Venera’s older sister, Jasmine Ahmadi, said.

Mr. Blinken met with some of the recent arrivals at the reception center, where they were given hot meals and rested in cots that were crammed together in a building that had been a shopping mall just a week earlier. Mr. Rau said an estimated 3,000 Ukrainians were there on Saturday — a number that he said had increased every day.

The latest tranche of humanitarian assistance is part of the Biden administration’s $10 billion request to Congress for additional funds to Ukraine.

Arriving in the southeastern Polish city of Rzeszow on Saturday morning, Mr. Blinken was greeted by Democrats and Republicans on the House Foreign Affairs Committee who had also come to gauge what more the United States could provide.

“We’re going to do all we can to help the Ukrainian people,” said Representatives Gregory Meeks, Democrat of New York and the committee’s chairman. The top Republican on the panel, Representative Michael McCaul of Texas, nodded in agreement.

Since the invasion, Mr. Blinken said, the United States has already sent more than $54 million in aid that includes water, 20,000 thermal blankets, and health care supplies for up to 100,000 people over the next three months.

After meeting with Mr. Blinken in Rzeszow, Mr. Rau said Russian attacks on civilians and nuclear power plants in Ukraine amounted to war crimes. He demanded that Russia be vigorously prosecuted — and said he had raised the possibility of a joint effort between Poland and the United States to do so. “Pursuing war criminals is an element of humankind’s common memory,” he told journalists in Rzeszow. “It’s our common obligation.”

Mr. Kuleba said it was not clear the state that Ukraine would be in when the fighting ceases — whenever that might be — and noted that even limited efforts to secure a cease-fire in at least two Ukrainian cities for humanitarian access had fallen short.

“But every war ends with diplomacy, and with talks, so we have to continue talking,” Mr. Kuleba said.

He added: “Thousands of people in Ukraine sacrifice their lives — men, women, old, young — to defend the country. When we prevail, and I have no doubt that we will, we will build a new Ukraine. And that country will be even better than the one that Russia destroyed.”