Bill for Trump’s Tax Holiday Will Be Due Next Year, Treasury Dept. Says 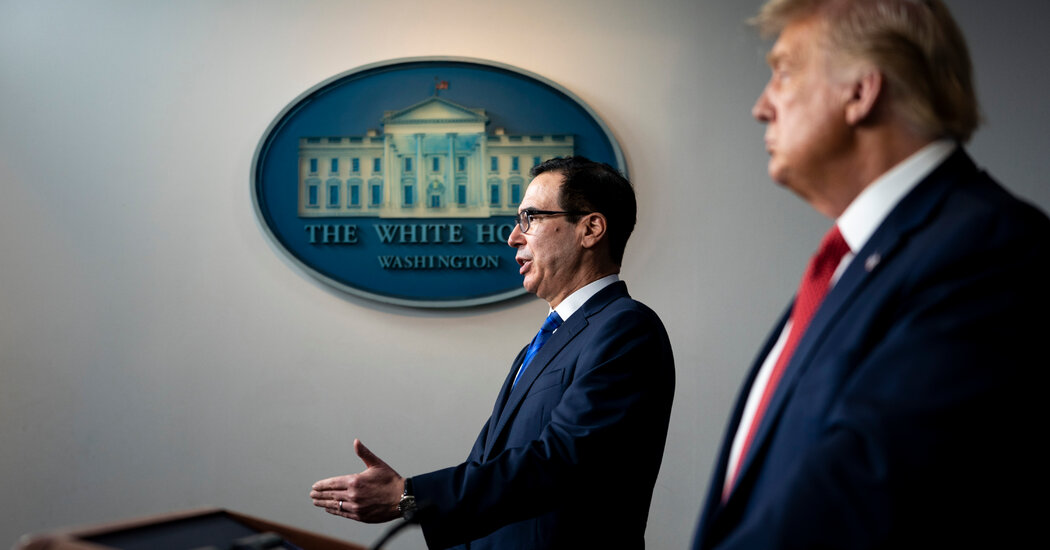 WASHINGTON — The Treasury Department released guidance on Friday evening instructing companies that they can stop withholding payroll taxes paid by employees beginning on Sept. 1 but that workers will have to pay the taxes by the end of April.

The awaited guidance is intended to help companies understand their obligation stemming from an executive action signed by President Trump this month that gives workers a tax holiday. Mr. Trump’s move came as negotiations with Congress over another round of economic relief legislation stalled. The president, who had been calling for a permanent payroll tax cut, has said that he will push for Congress to waive the deferred taxes next year if he wins re-election.

The guidance, released in coordination with the Internal Revenue Service, was delayed because the White House was seeking ways to move the tax liability away from workers entirely so that they are not faced with a big tax bill next year. That legally dubious idea proved to be unworkable, however, and the I.R.S. made clear that if companies decided to take the government up on this offer, their employees would still have to pay the tax through larger withholdings — and less take-home pay — next year.

The I.R.S. offered little clarity about what companies will have to do about the deferred withholdings if a worker ends up leaving the business before the end of the year. The guidance said that “the affected taxpayer may make arrangements to otherwise collect the total applicable taxes from the employee,” suggesting companies can hold workers liable for the tax even if they leave the company.

Mr. Trump has argued that cutting or deferring the 6.2 percent payroll tax that funds Social Security would bolster consumer spending and stimulate an economy that is still struggling under pressure from the coronavirus pandemic. Democrats and Republicans who have been critical of the idea have said that relief measures should be focused on offering immediate help to Americans who have lost their jobs.

Major industry trade groups, including the U.S. Chamber of Commerce, have criticized the payroll tax suspension, warning that it will cause logistical problems for companies and simply result in a giant tax bill for workers in 2021. Trade groups and the companies they represent have indicated they do not want to participate in the tax holiday over concerns that their workers will be on the hook for bigger tax bills if Congress does not act to waive the levies.

“A pause in withholding may mean that workers see a boost in take-home pay in the last four months of the year,” Kyle Pomerleau, a fellow at the American Enterprise Institute, wrote this month, adding that uncertainty about who will ultimately pay the owed taxes has made the deferral less effective.

The guidance was delayed by more than a week as the Treasury Department and the White House tried to agree on the terms. Some White House officials wanted the tax payments to be extended over a far longer period of time so that workers would not suffer a big hit at once next year.

Releasing the guidance days before the deferral goes into effect will make the decision even more challenging for companies, and the announcement was met with disappointment by some tax experts.

Mr. Trump authorized the payroll tax cut after negotiations with Congress over another stimulus package stalled. The prospect of more congressional action remains dim. Speaker Nancy Pelosi of California said in a statement on Friday that her discussions with the White House this week had been fruitless.

“They made clear that they still do not comprehend the needs of the American people as lives and livelihoods are overwhelmed by the virus and its economic consequences,” Ms. Pelosi said, criticizing what she described as the White House’s “contempt” for assisting state and local governments.