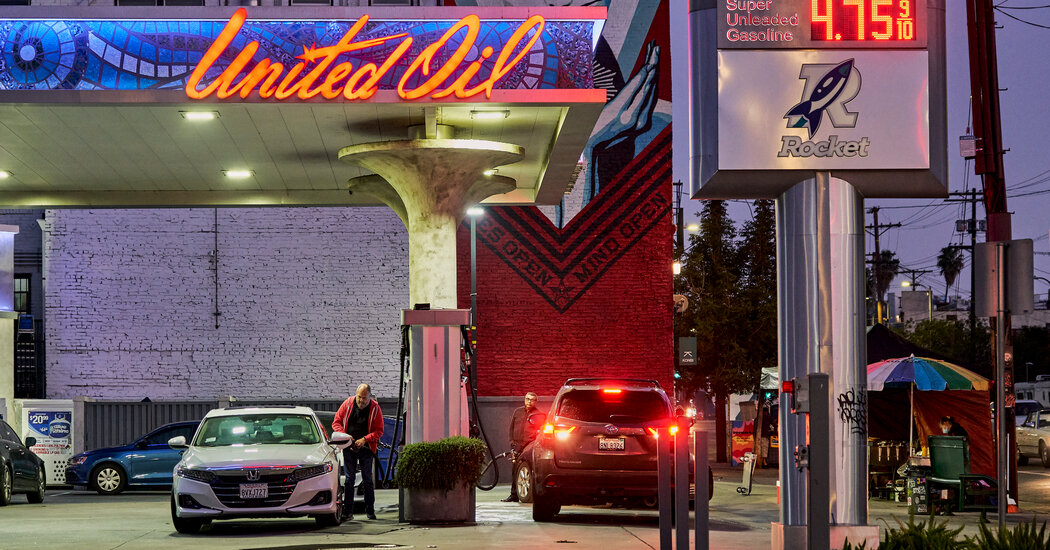 President Biden faces lagging approval ratings as he delivers his first State of the Union address on Tuesday evening.

Just over a year into his presidency, more than 53 percent of Americans disapprove of Mr. Biden’s performance, according an average calculated by FiveThirtyEight, the data polling website, compared to roughly 41 percent who approve of the job he has done.

Mr. Biden on Tuesday will seek to persuade increasingly anxious Americans that he is focused on the daily issues impacting their lives, such as the rising price of goods and gasoline prices, while also detailing his administration’s strategy against the Russian invasion of Ukraine. After months of focusing on sprawling legislation that remains stalled in congressional gridlock, recent polling data provides a glimpse into the challenge Mr. Biden faces during his Tuesday night speech — and in the months ahead of the 2022 midterms.

The primary drivers of the frustration among Americans include the coronavirus pandemic and its effect on the economy.

Mr. Biden, who campaigned on overcoming the pandemic and uniting the country after the Trump presidency, began his term with approval ratings hovering above 50 percent, according to FiveThirtyEight. But after winning praise for passing a $1.9 trillion stimulus package and introducing sweeping social-spending and climate legislation, he has confronted foreign policy crises overseas and struggled to unite his own party back home.

Mr. Biden’s approval ratings declined sharply in August after his administration’s chaotic withdrawal from Afghanistan. The rise of the Omicron variant also prompted the administration to restore some pandemic restrictions, even after the White House celebrated “independence from the virus” on the Fourth of July.

Mr. Biden is faring a bit better than his predecessor. Roughly 54 percent of voters did not approve of his handling of the presidency at the same point during his first term, according to FiveThirtyEight.

Nearly 60 percent of Americans disapprove of the way Mr. Biden has handled the economy, according to a RealClear Politics average of data, compared to 37 percent of those who approve of the job he’s done. The president will highlight the addition of six million jobs since he took office, but will run up against Americans still feeling the pain of inflation.

“The big, fat most obvious one is inflation,” said Cornell Belcher, a Democratic pollster. “Whether it be swing voters, independent voters or African-American voters — our base group of voters — they all point to inflation and concerns of the economy.”

The frustrations over the economy can also be linked to the coronavirus.

More than 50 percent of the public disapproves with the administration’s response to a pandemic, according to the RealClear Politics average of polling, despite his administration vaccinating nearly three-quarters of the population.

Mr. Biden will try to assure voters the United States is entering a new phase of the pandemic, most likely by pointing to the new guidance from the Centers for Disease Control and Prevention that will lift masking restrictions in many parts of the country.

The president’s approval ratings have also slid over criticism from both Democrats and Republicans of illegal crossings at the southwest border and the haphazard withdrawal from Afghanistan this summer.

White House officials have said in recent weeks that they hope to shift their outreach strategy to voters by visiting more states to talk about the accomplishments of the Biden administration, rather than describing the need for legislation that remains stalled. The administration is focused on selling the benefits of the stimulus package, as well as the $1 trillion bipartisan infrastructure package that passed last fall.