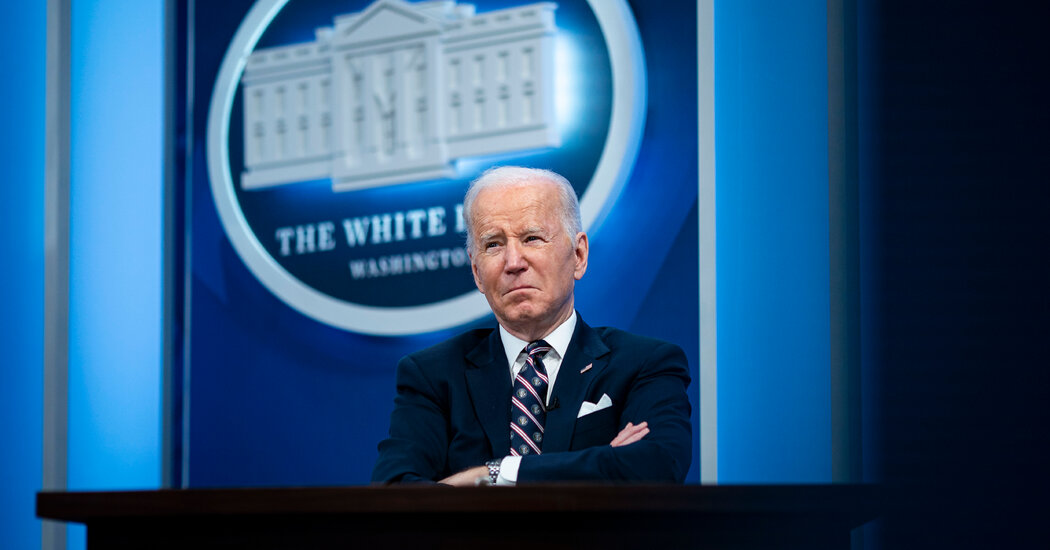 President Biden said the world would “hold Russia accountable” as explosions were seen in Ukraine’s second-largest city minutes after Russian President Vladimir V. Putin declared the start of a “special military operation” in the country.

“President Putin has chosen a premeditated war that will bring a catastrophic loss of life and human suffering,” Mr. Biden said in a statement on Wednesday night. “Russia alone is responsible for the death and destruction this attack will bring, and the United States and its allies and partners will respond in a united and decisive way. ”

Mr. Biden said he was monitoring the events from the White House on Wednesday night and receiving updates from his national security team. The president said he would meet with Group of 7 leaders on Thursday and would then address the American people, when he planned “to announce the further consequences the United States and our allies and partners will impose on Russia for this needless act of aggression against Ukraine and global peace and security.” Mr. Biden’s speech is scheduled for Thursday afternoon, according to a White House official.

Mr. Biden’s penalties against Russia for its actions in Ukraine have included imposing economic sanctions against two Russian banks and the company behind an energy pipeline connecting Russia to Germany. They also include measures aimed at hurting several members of the Russian elite and prohibiting Russia from trading debt in American or European markets.

Mr. Biden and his top aides, who warned that Mr. Putin intended to invade Ukraine, said they hoped the countermeasures by the United States would both deter Mr. Putin and allow the Biden administration to add more sweeping sanctions if he escalated the conflict.

Mr. Putin’s declaration set off a rare moment of bipartisan ire in Congress as lawmakers in both parties furiously denounced the invasion as a premeditated attack and called on Mr. Biden to swiftly enact new, debilitating sanctions on Russia.

“Every option must be placed on the table to stop Putin’s malevolence that not only threatens Ukraine and Eastern Europe, but the security of all liberal democracies around the globe,” said Senator Jeanne Shaheen, Democrat of New Hampshire. “Putin chose a path to war, and he must now suffer the consequences.”

Senator Jim Risch of Idaho, the top Republican on the Foreign Relations Committee, had pressed the Biden administration for weeks to enact a sweeping array of sanctions on Moscow, on activities including the Russian gas pipeline. He warned that the repercussions Mr. Putin would face would be “painful and swift.”

The House and the Senate are out of session, with lawmakers working from their districts across the country, but senators are expected to receive a briefing on the situation from the Biden administration on Thursday afternoon. And even outside of Washington, before the invasion, a bipartisan group of senators had been working to reach agreement on a new set of sanctions targeting Moscow.

“For more than 70 years, we have avoided large-scale war in Europe,” said Senator Mark Warner, Democrat of Virginia, the chairman of the Intelligence Committee. “With his illegal invasion of Ukraine, Vladimir Putin has tragically brought decades of general peace to an end.”