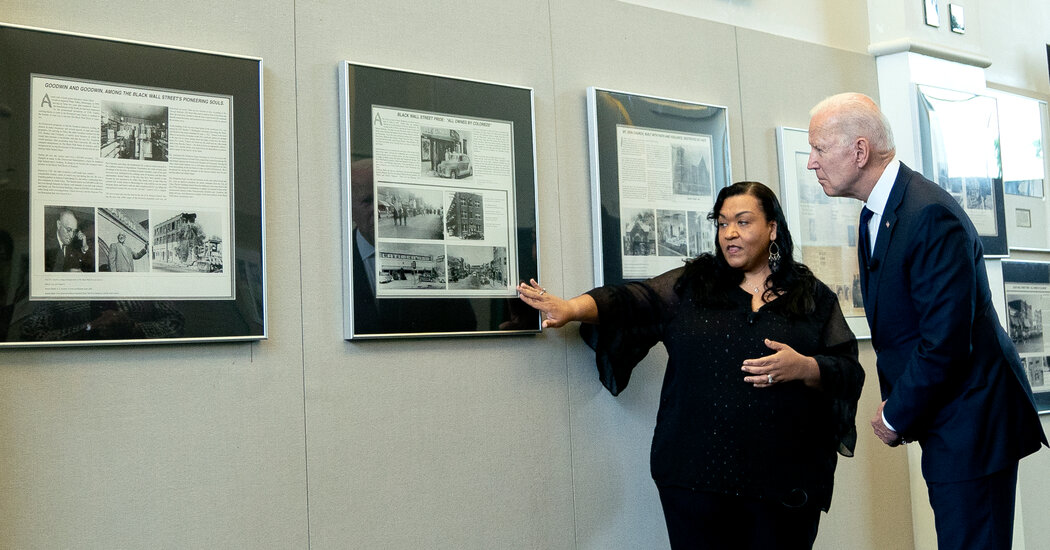 President Biden on Tuesday announced several initiatives to reduce racial disparities, including a pledge to boost federal contracts to minority-owned businesses by 50 percent and a rollback of two Trump-era actions that have hamstrung fair housing laws.

Mr. Biden, who spoke in Tulsa, Okla., to commemorate the 100th anniversary of the massacre of Black citizens at the hands of a white mob, has aimed many of his recent policy moves at bolstering the Black middle class.

His choice of a city whose vibrant business district was decimated by racial violence was seen as a fitting backdrop to emphasize his commitment to erasing the wealth gap between races, a key campaign promise, White House officials said.

The announcement “builds on the president’s historic approach to advancing equity and racial justice across the whole of federal government,” Karine Jean-Pierre, a spokeswoman for the president, said on Tuesday.

The administration will seek to increase the percentage of contracts to small businesses in underserved communities, a commitment that could mean an additional $100 billion for businesses designated as “disadvantaged” by the federal government.

The average Black family has one-tenth of the assets that a comparable white family possesses, and the administration is seeking to fortify the main source of wealth for Black households: homeownership.

Housing Secretary Marcia L. Fudge will oversee the creation of a task force that will propose solutions to racial discrimination in the appraisal of housing in Black neighborhoods, part of a separate-but-unequal system of segregated homeownership that has grown out of discriminatory housing laws and racist lending policies.

On Friday, Ms. Fudge announced a $100 million initiative intended to spur Black homeownership in areas historically off-limits to minorities because of biased zoning laws or discrimination by banks. The program will boost down payments for recipients of Federal Housing Administration loans, giving borrowers equity comparable to that of their more affluent neighbors.

In addition, the Department of Housing and Urban Development will issue two Fair Housing Act rules that reverse efforts by the Trump administration to weaken protections.

Under the proposed White House budget released last week, the department’s Fair Housing and Equal Opportunity division’s staff will increase about 20 percent. Ms. Fudge has already said she also intends to enforce an Obama-era program intended to increase racial and economic diversity in the suburbs.

“Because disparities in wealth compound like an interest rate, the disinvestment in Black families in Tulsa and across the country throughout our history is still felt sharply today,” a statement posted on the White House website said. “The median Black American family has thirteen cents for every one dollar in wealth held by White families.”