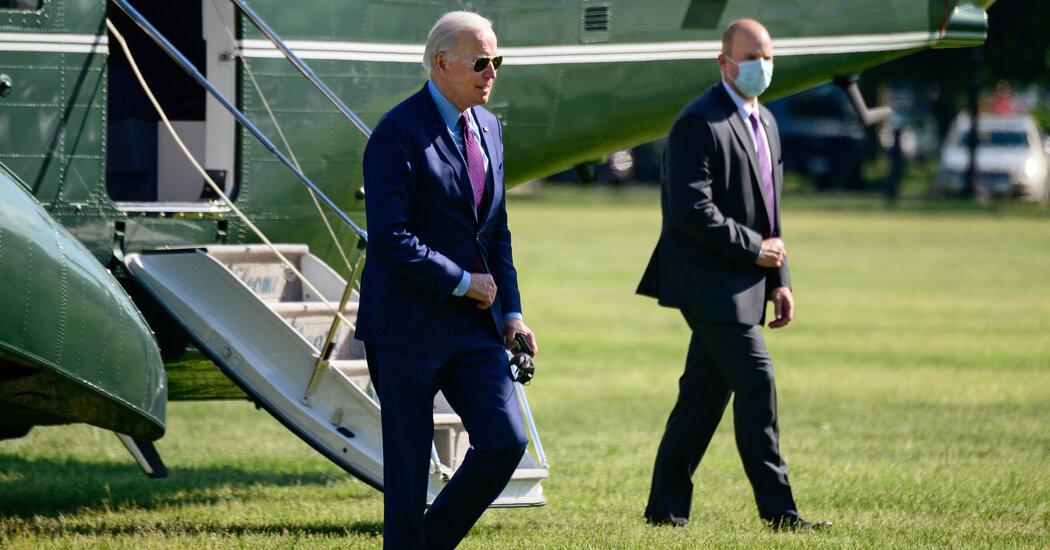 President Biden delivered the commencement address at the U.S. Coast Guard Academy’s graduation ceremony in New London, Conn., on Wednesday, his first speech at a service academy since becoming president in January.

The president saluted cadets for persevering through the Covid-19 pandemic, noting that last year’s class had not been able to hold graduating ceremonies. He also chided them, in jest, for not clapping at a joke he made at the expense of the Navy.

“You are a really dull class,” Mr. Biden said. “Come on, man, is the sun getting to you? I would think you would have an opportunity when I say that about the Navy to clap.”

He went on to praise the class and the Coast Guard, citing its role in safeguarding global trade and responding to the pandemic and to national disasters, like hurricanes and wildfires, exacerbated by climate change.

“All kidding aside, being here today is a victory in and of itself, an important mark in the progress we made to turn the tide of the pandemic, and it’s a testament of the military’s sense of responsibility you already embody,” Mr. Biden said. He added that he had no doubt the current class of graduates would “reflect the best of our country and the proudest traditions of our service.”

The president also praised the racial and gender composition of the graduating class, noting that about a third of the graduates were underrepresented minorities and a third were women.

“We need to see more women at the highest levels of command, and we have to make sure women have a chance to succeed and thrive throughout their careers,” he said, adding, “My administration is committed to taking on the scourge of sexual assault in the military.”

Mr. Biden’s commencement speech came more than a month after he announced that he would pull all American troops out of Afghanistan by Sept. 11. He said there was no longer any justification to believe that the United States’ military presence could turn Afghanistan into a stable democracy.

The ceremony was not open to the public, and the number of guests was reduced and social distancing measures were in place, though fully vaccinated attendees were not required to wear a mask.

Wednesday’s event was the second time that Mr. Biden had addressed the academy’s graduating class. He last gave the keynote address in 2013 as vice president.

“You’re graduating into a world that is rapidly changing,” Mr. Biden said at the time, pointing to environmental security threats and record-high levels of piracy and human trafficking.

A president last addressed the U.S. Coast Guard’s graduating class in 2017, when President Donald J. Trump delivered the commencement speech. Mr. Trump used much of his speech to defend himself, telling attendees that no leader in history had been treated more “unfairly” by the news media and Washington elites.

President Barack Obama gave the academy’s commencement address twice, in 2011 and 2015. He used the speech in 2015 to push for action on climate change, calling it “an immediate risk to our national security.”