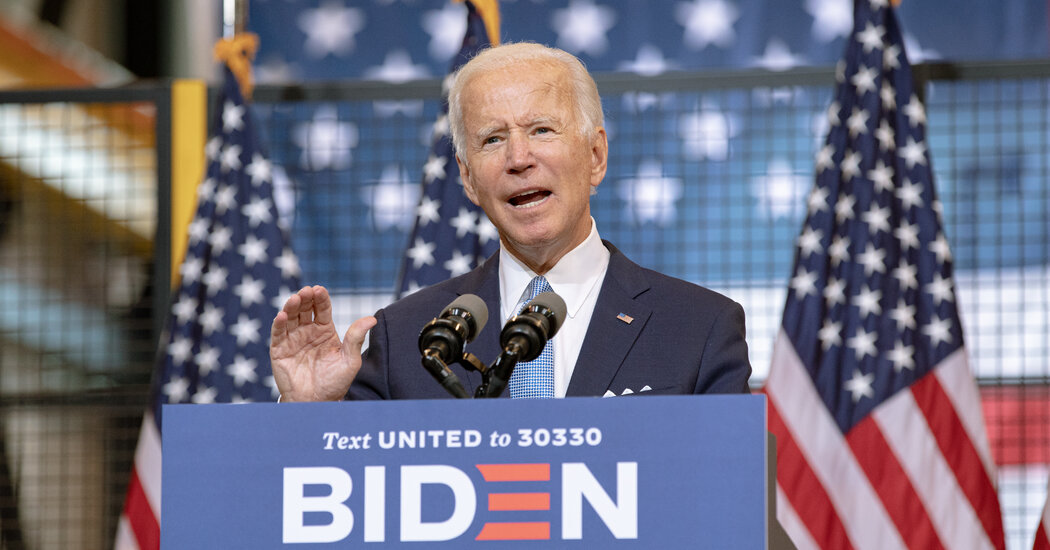 Joseph R. Biden Jr.’s campaign unveiled a new television ad late Tuesday that packages portions of his speech on Monday in Pittsburgh condemning the sporadic violence that has erupted in some cities. The ad came as the former vice president pushes back against President Trump’s efforts to define the Democrats as a party tolerant of lawlessness.

Mr. Biden has repeatedly condemned instances in which protests for racial justice have burst into violence, accusing Mr. Trump of stoking divisions and laying blame for any chaos on the current occupant of the White House.

But the ad — part of a $45 million one-week television and digital purchase that is by far the campaign’s largest to date — is the first time that Mr. Biden has put this pushback on issues of crime and public safety into a major paid advertising program.

Mr. Biden casts himself as a unifying figure who would seek to “lower the temperature” of the national debate and bring the country together. The spot ends with Mr. Biden, who is Catholic, quoting the former pope, John Paul II: “Be not afraid.”

Unlike many of Mr. Biden’s recent ads, the 60-second spot does not mention the coronavirus pandemic.

The speech in Pittsburgh and the advertising campaign are part of Mr. Biden’s response to a Republican convention last week in which the G.O.P. tried repeatedly to twist the former vice president’s record on crime and policing, with Mr. Trump himself often amplifying the misleading claims on Twitter.

At times, the Republicans have accused Mr. Biden of being too tough on criminals, citing his role in crafting the 1994 crime bill; at others, they have accused him of coddling rioters.

“Ask yourself: Do I look like a radical socialist with a soft spot for rioters?” Mr. Biden said in Monday’s speech. “Really?”

He then pivoted to try to broaden the definition of safety for voters, arguing that Mr. Trump had eroded the health and economic safety of millions of Americans through his response to the coronavirus.

The sheer size of the new advertising purchase — it is bigger than Mr. Biden’s paid-media budget during the entirety of the 2020 primaries — is a testament to how much money is pouring into the campaign.

Mr. Biden raised more than $300 million in August with the Democratic Party, according to people familiar with the matter. The exact figure is still unknown, but the total is believed to be the largest sum that any candidate has ever raised, granting the Biden campaign financial flexibility to spend so heavily on ads in early September.

No Selfies or Hugs, but Biden Is Sneaking In Meet and Greets

In Voting Cases, Chief Justice Roberts Is Alone but in Control