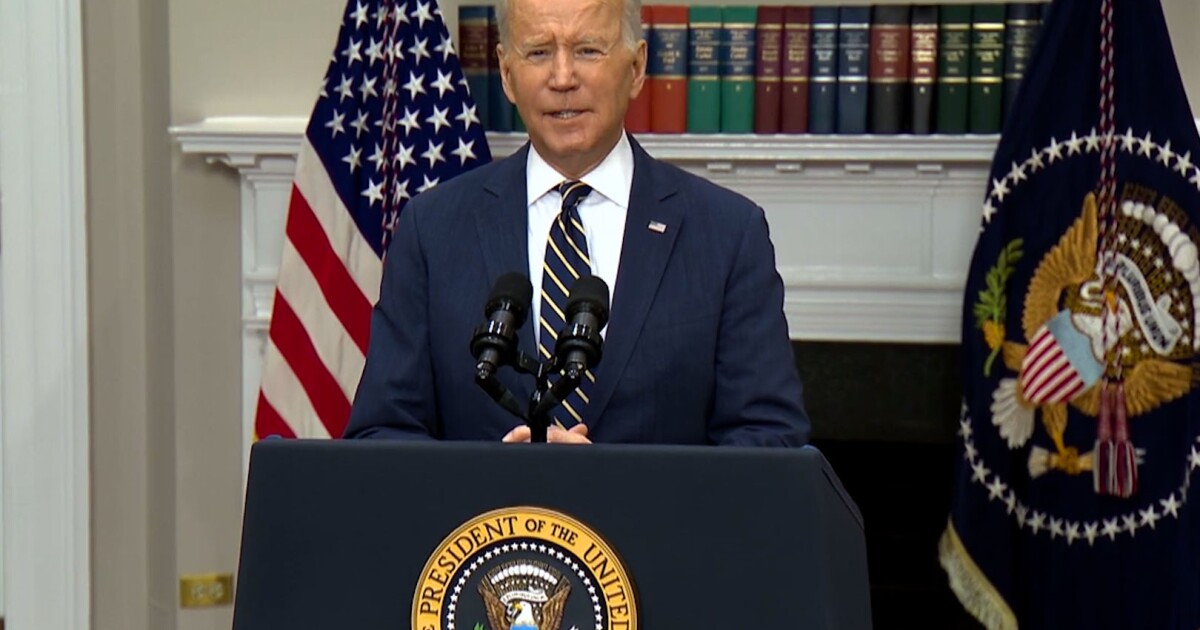 President Biden announced Friday that the U.S. will suspend normal trade relations with Russia as part of the ongoing effort to punish President Vladimir Putin for his unprovoked war in Ukraine.

“Putin is the aggressor and he must pay the price,” Biden said in remarks from the White House, declaring that sanctions already imposed by the West are “crushing” Russia’s economy and warning that Moscow would pay “a severe price” if it deploys chemical or biological weapons in Ukraine, as the White House suggested this week it may be plotting to do.

The latest move, made in concert with the Group of 7 and the European Union, paves the way for the administration to increase tariffs on Russian imports above the levels pledged to all World Trade Organization members.

Thanking lawmakers for holding off on legislation until he could coordinate with allies, Biden announced that “each of our nations is going to take steps to deny most favored nation status to Russia,” which he said will “make it harder for Russia to do business with the United States.”

Biden’s remarks from the White House Roosevelt Room came shortly after a phone call with Ukrainian President Volodymyr Zelensky, who sought to bolster his country’s resolve in a video message on the 16th day of fighting and as Russian forces slowly move closer to the capital city of Kyiv.

Zelensky tweeted that it was a “substantive” conversation that focused on the next steps of the West’s response to Russia. A short White House readout said that Biden “highlighted how the United States is continuing to surge security, humanitarian, and economic assistance to Ukraine” and updated Zelensky on the latest moves.

Biden on Friday emphasized the importance of moving in lockstep with Europe against Russia, adding that “doing it in unison with other nations that make up half of the global economy will be another crushing blow to the Russian economy that has already suffered very badly from our sanctions.”

The president fully threw his support behind a bipartisan proposal that has gained steam in Congress in recent days that would revoke Russia’s permanent normal trade relations status and direct the U.S. trade representative’s office to seek Russia’s ouster from the World Trade Organization.

The top Democrats and Republicans on the House Ways and Means Committee and the Senate Finance Committee proposed the move in a letter Monday. House Speaker Nancy Pelosi (D-San Francisco) said that the House will take up legislation to formalize the revocation next week and that she anticipates a bipartisan vote.

Booting Russia from the WTO requires a vote and support from two-thirds of the organization’s 164 member nations. As such, most experts don’t believe it is likely. But nothing prevents individual countries from revoking Russia’s WTO privileges, as Canada and Ukraine have already done.

Biden also announced a new executive order banning Russian imports of seafood, vodka and diamonds. And the Treasury Department imposed additional sanctions Friday on more than 24 individuals, 10 of whom serve on the board of VTB, Russia’s second-largest bank. A dozen more are members of the Russian parliament and the family of Putin’s spokesman, Dmitri Peskov.

The U.S. is not a major destination for Russian goods, which account for about 1% of total imports. Thus, the new potential tariffs on Russian products are unlikely to have a major impact on American consumers, who are already bearing the brunt of inflation spiking to a 40-year high.

More than half of what the U.S. buys from Russia are petroleum crude and oil products. Other major imports include iron, frozen crabs and such precious metals as palladium, which is a critical component of catalytic converters.

In a joint statement by all G-7 members, the world’s leading democracies vowed to work toward barring Russia from obtaining financing from major multilateral institutions including the International Monetary Fund and the World Bank. “Russia cannot grossly violate international law and expect to benefit from being part of the international economic order,” the statement read.

When the war began more than two weeks ago, the administration focused its initial response on leveling sanctions against Russian oligarchs and the country’s banks. As support has deepened for Ukraine across the West, the U.S. and Europe have taken additional steps, targeting sanctions on Putin himself and members of his inner circle. Earlier this week, they took action to reduce their dependence on Russian energy.

On Tuesday, Biden announced the U.S. would ban imports of Russian oil, gas and coal. Europe, which is far more reliant on Russian energy, has proposed a plan to cut its use of natural gas from Russia by two-thirds this year.

Analysts believe Washington can still go further in squeezing Russia economically. Brian O’Toole and Daniel Fried of the Atlantic Council, a Washington think tank, suggested that the U.S. could expand sanctions on major Russian state-owned banks such as Gazprombank and Russian Agricultural Bank by locking them out of the international financial system, and target Russian stock markets.

Friday’s move to halt trade was largely symbolic, indicating that the U.S. doesn’t see Russia as a trading partner. But coming in coordination with European allies that trade more heavily with Russia, the move will further isolate Russia from the global trading system.

Gary Hufbauer, a trade expert at the Peterson Institute for International Economics, said even if the move is mostly symbolic, doing it legislatively would establish a significant and probably enduring precedent.

Once permanent normal trade relations status “is revoked for Russia, the path will be established for congressional voices to call for revocation against China, and then, as conflicts arise, against other countries,” he said. “And once PNTR is revoked, it will take a new act of Congress to restore PNTR. This will put a burden on future presidents, since side issues will likely be attached to restoration, even when U.S. relations with the partner country are harmonious.”