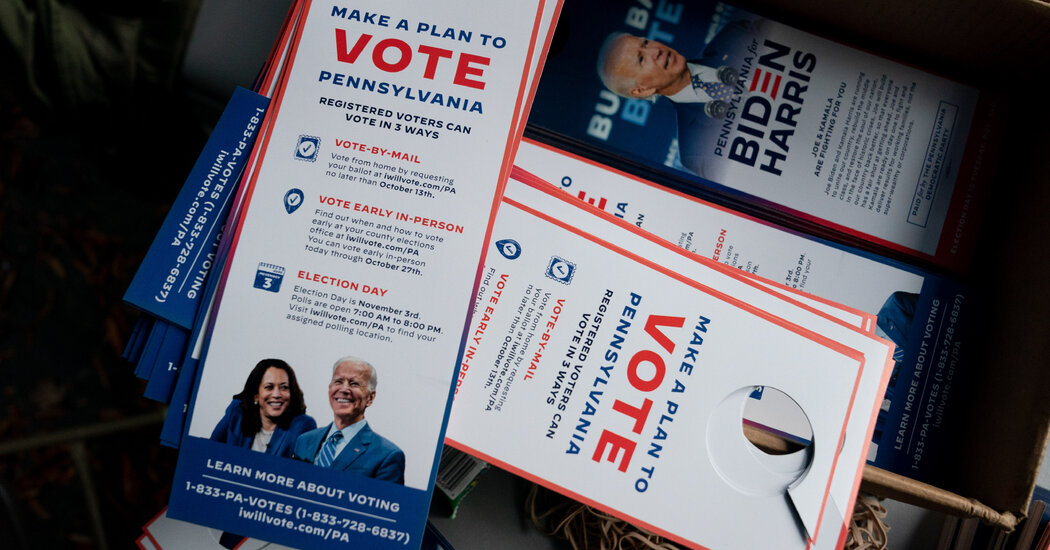 There is not much data yet from polls conducted after the final presidential debate, but what there is shows no real sign of movement. With the clock ticking down, that is good news for Joseph R. Biden Jr. and unwelcome news for President Trump.

Polls released by Ipsos on Monday found Mr. Biden ahead among likely voters by six points in Pennsylvania and nine points in Wisconsin — both states where Mr. Biden has led consistently and where victory is crucial to his chances of taking the White House. His margins in the Ipsos polls were both greater than the credibility interval, which is similar to a margin of error.

YouGov surveys of Wisconsin, Michigan and Pennsylvania also found Mr. Biden maintaining or even building slightly on his leads.

Monday also saw the release of national surveys conducted entirely after the debate by Yahoo/YouGov and Morning Consult, and the president didn’t pick up ground in either. In fact, the YouGov/Yahoo poll showed Joe Biden up by 12, his largest lead yet from that pollster.

Beyond that, we have a growing body of polls with at least some interviews done after the debate. There’s the IBD/TIPP tracking poll, which again shows Mr. Biden ticking up a bit over the weekend. And there’s a whole lot of state polling, which all basically looks as it did before the debate.

If these kinds of results last into the weekend, President Trump will be in an unenviable spot, needing the polls to be wrong by even more than they were in 2016.