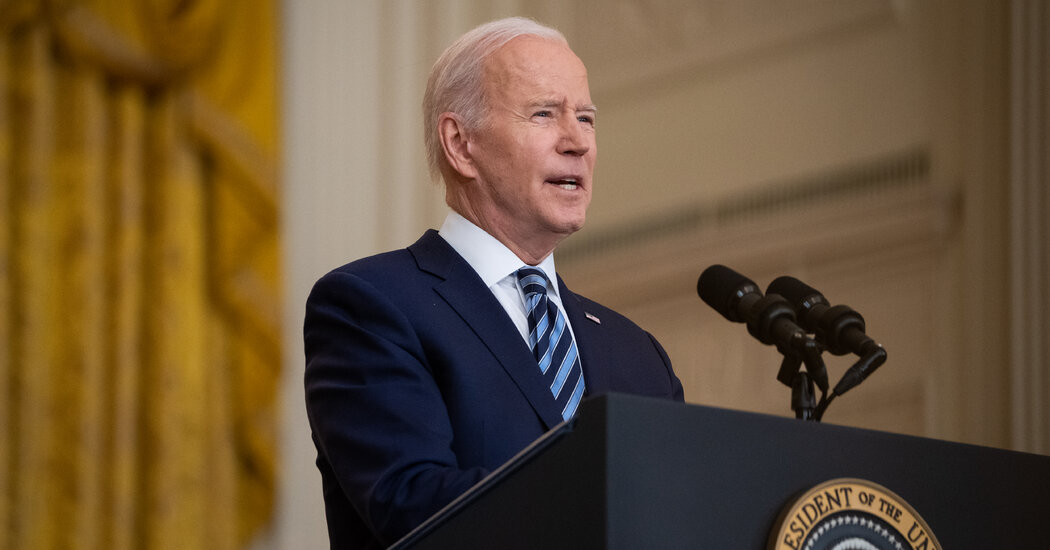 WASHINGTON — President Biden on Thursday said the United States is imposing what he said would be crushing sanctions on Russia for waging war on Ukraine, denouncing President Vladimir V. Putin of Russia for launching a “brutal assault on the people of Ukraine” overnight.

“Putin is the aggressor. Putin chose this war,” Mr. Biden said in remarks from the White House. “And now he and his country will bear the consequences.”

Mr. Biden said the United States would cut off Russia’s largest banks and largest companies from the western financial markets and would restrict exports of technology to Russia, saying that would vastly degrade the country’s ability to thrive in the weeks, months and years ahead.

He also said the United States was freezing trillions of dollars in Russian assets, including the funds controlled by Russian elites and their families, making them pay for what Mr. Biden called “a premeditated attack” against a free nation in Europe.

And the president said that he had authorized sending more troops to Eastern European countries in the NATO alliance. While he vowed again that American troops will not engage with Russia in Ukraine, he said that the United States would defend its NATO allies if Russia moved beyond Ukraine’s borders.

“The United States will defend every inch of NATO territory with the full force of American power,” he said.

He warned Americans that they would feel some economic pain from the Russian invasion, but he said there was no question that the United States and its allies needed to respond aggressively to the invasion.

“America stands up to bullies,” he said. “This is who we are.”

Overnight, as Russian armament began raining down on Ukraine’s cities, Mr. Biden spoke by phone with President Volodymyr Zelensky of Ukraine and pledged to rally the world behind support for the besieged nation.

On Thursday morning, Mr. Biden met with his national security team in the Situation Room. Officials said they discussed “how we will hold Russia accountable for its unprovoked and unjustified attack on Ukraine.” He also met by video with leaders of the Group of 7 nations in an effort to coordinate the global response to the war in Europe begun by Mr. Putin.

Mr. Biden had for weeks threatened severe sanctions that could cripple Russia’s economy, in the hopes that Mr. Putin would back down from plans to invade his neighbor. Earlier this week, Mr. Biden authorized the beginning of those sanctions when the Russian leader declared his intention to wage war.

But the president and European allies had held back the most aggressive sanctions and warned Mr. Putin that the punishment would increase if his tanks rolled across Ukraine’s border.