Biden Says of Condemning Putin: ‘I Make No Apologies’ 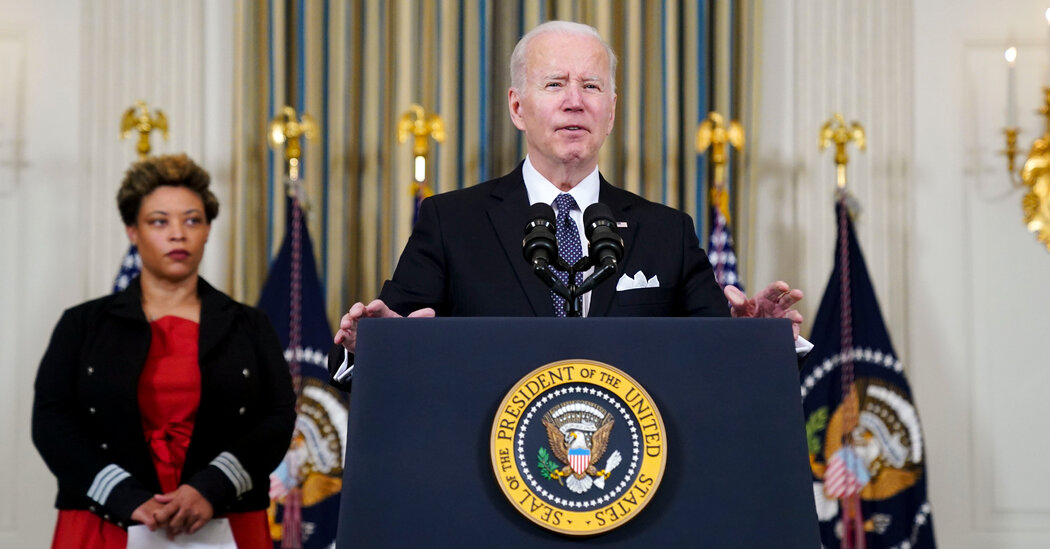 WASHINGTON — President Biden on Monday stood by his comment that Vladimir V. Putin should not remain president of Russia, but he said it was an expression of his own horror over the invasion of Ukraine and not a change in American policy aimed at seeking to remove Mr. Putin from office.

“I was expressing the moral outrage that I feel, and I make no apologies for it,” Mr. Biden told reporters at the White House, rejecting criticism from around the globe in the last two days about the potential diplomatic consequences of his words. The president said no one should have interpreted his comments as calling for Mr. Putin’s ouster.

“It’s ridiculous,” he said of the questions about his speech in Warsaw on Saturday, when he said, “For God’s sake, this man cannot remain in power.” On Monday, Mr. Biden said: “Nobody believes I was talking about taking down Putin. Nobody believes that.”

The fallout over Mr. Biden’s words in Warsaw underscored the dilemma that he and the NATO allies face about how to condemn the war in Ukraine and pressure Russia without shutting down any relationship with Moscow that might help end the invasion.

The West will also have to decide whether Moscow would be allowed back into the global economy, whether to lift sanctions and how to resume diplomatic relations if Russia pulls back its forces.

Mr. Biden’s remark drew some praise for its toughness and clarity but also warnings from lawmakers and President Emmanuel Macron of France, who said on Sunday that “I wouldn’t use this kind of words” when asked about Mr. Biden’s speech. Mr. Macron said he hoped to obtain a cease-fire and the withdrawal of Russian troops from Ukraine through diplomacy.

Some critics said Mr. Biden’s declaration could make it more difficult to negotiate an end to the 5-week-old war, which has killed thousands in Ukraine and driven millions from their homes.

Mr. Biden insisted on Monday that was not the case, although Mr. Putin has told Russians for years that he believes the United States and the C.I.A. are conspiring to remove him from power. Dmitri S. Peskov, the Kremlin’s spokesman, said that Mr. Biden’s statement “makes us worry” and that the Kremlin would “continue to closely monitor” the president’s remarks.

In his speech in Warsaw, Mr. Biden tried to draw a distinction between Mr. Putin’s actions and those of the Russian people, who he said were not responsible for the atrocities being committed by the country’s military in Ukraine each day. He suggested that Russian controls on television and the internet had left the country’s citizens unaware of the truth.

“Vladimir Putin’s aggression have cut you, the Russian people, off from the rest of the world, and it’s taking Russia back to the 19th century,” he said.

Moments later, he proclaimed that “a dictator bent on rebuilding an empire will never erase a people’s love for liberty” before declaring that Mr. Putin should go.

The White House appeared to rapidly understand that Mr. Biden’s words could be seen as a reversal of the administration’s long-stated position that it was not seeking regime change in Russia. It took just minutes for officials to back away from Mr. Biden’s comments on Saturday evening. Reporters had just loaded buses after his speech when administration officials sent an email denying that the president was formally advocating Mr. Putin’s removal.

On Sunday, Secretary of State Antony J. Blinken told journalists in Jerusalem that “we do not have a strategy of regime change in Russia or anywhere else, for that matter.”

On Monday, his first extended comments on the matter, Mr. Biden insisted his statement had been misinterpreted.

“People like this shouldn’t be ruling countries, but they do,” he said, adding, “But it doesn’t mean I can’t express my outrage.”

Mr. Biden spoke as the violence in Ukraine continued to intensify, with Russian forces appearing determined to cement their territorial gains in the east. In just five weeks, the conflict has killed thousands of civilians, including women and children who have been the victims of intense Russian bombardment. Human rights advocates say more than 3.7 million Ukrainians have fled, creating one of the largest-ever refugee crises across Eastern Europe.

The president’s remark on Saturday was not the first time an apparently off-the-cuff comment upended or overshadowed an otherwise tightly scripted White House message.

During a news conference earlier on the trip, Mr. Biden said Russia’s use of chemical weapons “would trigger a response in kind,” seeming to suggest that NATO would respond with chemical weapons, which are banned by international law. Jake Sullivan, the president’s national security adviser, told reporters the next day that was not what the president meant, saying that the “United States has no intention of using chemical weapons, period, under any circumstances.”

In January, Mr. Biden created a similar flurry of speculation when he said that the response to a then-potential invasion of Ukraine would depend on whether “it’s a minor incursion.” Mr. Biden eventually corrected himself, saying, “If any, any assembled Russian units move across the Ukrainian border, that is an invasion.”

Mr. Biden is no stranger to the nuances of public diplomacy, in which officials — especially heads of state — are careful to speak in very particular ways in an effort to avoid offending another leader or sending an unintended message about policy.

American presidents, for example, never refer to Taiwan as an independent nation for fear of provoking anger from the Chinese government. Similar care is taken when talking about the city of Jerusalem, the status of which remains a disputed part of discussions between Israel and the Palestinians.

In 2016, when President Barack Obama delivered a eulogy at the funeral of Shimon Peres, the former Israeli president, a White House stenographer initially indicated that the remarks had been given in “Jerusalem, Israel.” After that created a minor flap, the remarks were amended to remove the reference to Israel.

Ongoing peace talks. Russia said that it would sharply “reduce military activity” near Kyiv and the northern city of Chernihiv. The announcement was the first sign of progress to emerge from peace talks between Ukraine and Russia in Istanbul.

On the ground. Russia’s apparent concessions in the north of Ukraine reflected a successful Ukrainian resistance that has bogged down Russia’s forces around Kyiv’s suburbs and retaken territory near the capital and cities closer to the Russian border.

Biden’s comments. During a speech in Warsaw on Saturday, President Biden said that President Vladimir V. Putin “cannot remain in power,” sending U.S. officials scrambling to walk back the ad-lib. On Monday, Mr. Biden stood by his remark, but said it was a personal expression of his “moral outrage.”

President Donald J. Trump repeatedly violated many of the diplomatic rules in what aides said was a deliberate attempt to shake up the way foreign policy was conducted. He called the leader of North Korea “Rocket Man,” formally recognized Jerusalem as the capital of Israel and took steps to more formally deal with Taiwan in the final days of his administration.

Since taking office, Mr. Biden has made it a priority to return to a more traditional form of diplomacy in which the United States seeks to work with adversaries like Russia even as the administration challenges actions by Mr. Putin that it finds objectionable.

But Russia’s invasion of Ukraine has tested that approach. During the past several weeks, Mr. Biden has grown increasingly vocal in his condemnation of Mr. Putin, using more aggressive language as the Russian leader has escalated his attacks on Ukraine.

A week ago, he called Mr. Putin “a war criminal” before the United States had officially made that determination. Before his speech on Saturday, Mr. Biden visited with refugees from Ukraine at a stadium in Warsaw and called Mr. Putin “a butcher” because of the deaths caused by shelling in Mariupol, a hard-hit city in the eastern part of the country.

That kind of language has helped Mr. Biden unite American allies behind a coordinated set of responses to Mr. Putin’s aggression, including some of the most severe sanctions ever levied on a large, developed nation. The president’s condemnations have been echoed over the past several weeks by other world leaders.

But it remains a delicate balance as the administration tries not to provoke Mr. Putin into engaging in a broader conflict with NATO countries. Mr. Biden has said repeatedly that such engagements could lead to World War III.

In his remarks to reporters on Monday, the president said it was his visit with the refugees just hours earlier that led to his comment about Mr. Putin not staying in power.

“Half the children in Ukraine,” he said, apparently referring to the number of children who are estimated to have become refugees because of the war. “I had just come from being with those families.”