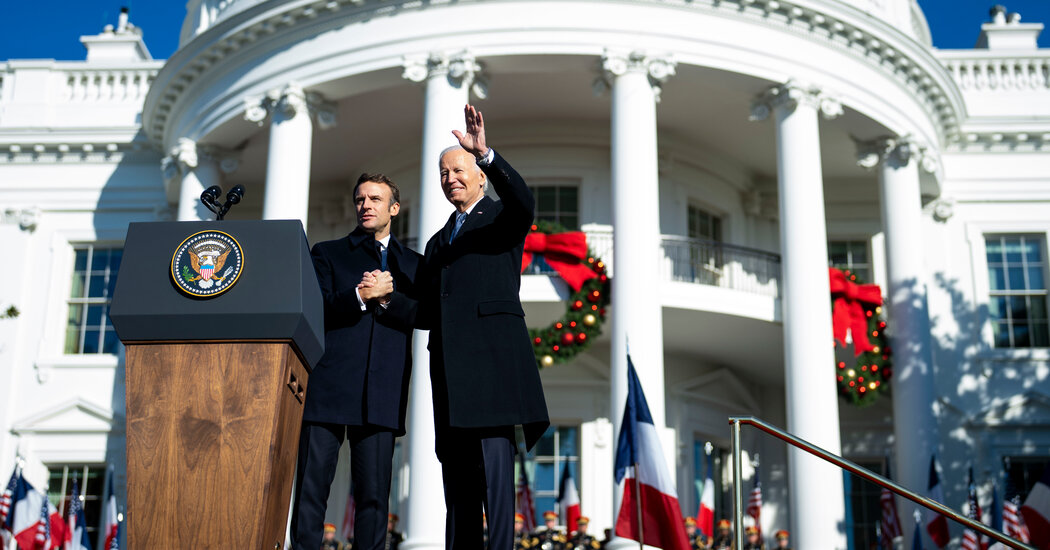 WASHINGTON — Standing beside the French leader who has championed the need for dialogue with Moscow, President Biden said on Thursday that he would talk to President Vladimir V. Putin, but only in consultation with NATO allies and only if the Russian leader indicated he was “looking for a way to end the war.”

Mr. Biden’s public expression of conditioned willingness to reach out to Mr. Putin gratified French officials and provided unexpected support for President Emmanuel Macron’s outreach. Mr. Biden noted that Mr. Putin had shown no interest yet in ending his invasion, but said that if that changed, “I’ll be happy to sit down with Putin to see what he has in mind.”

Evidently determined to present a united front during a White House news conference that at times resembled a love fest, Mr. Macron said that France would increase its military support for Ukraine and “will never urge Ukrainians to make a compromise that will not be acceptable for them.”

In effect, the two leaders met each other halfway, with Mr. Biden showing more openness to a negotiated settlement and Mr. Macron more unequivocal support for the Ukrainian cause. If partially choreographed, the meeting of minds appeared to exceed expectations on both sides.

It was a significant show of trans-Atlantic unity on the eve of a winter that will put immense strain on the Ukrainian people, as well as pressure on Western economies, especially European states scrambling to find new sources of energy as prices rise sharply.

French officials said that during a three-hour closed meeting, Mr. Biden and Mr. Macron agreed that more Ukrainian battlefield gains would constitute important leverage in any talks with Moscow. In practice, the idea of negotiation seems far-fetched at a time when Mr. Putin has nothing he can call victory, and Volodymyr Zelensky, the Ukrainian president, has military momentum.

“I’m not going to do it on my own,” Mr. Biden said of the possibility of talking to Mr. Putin, whose actions in Ukraine he called “sick.”

Mr. Macron was effusive in his support of Ukraine and its right to recover its full sovereignty, and there was no hint of his earlier calls for the need to avoid “humiliating” Russia. “If we want sustainable peace, we have to respect the Ukrainians to decide the moment and the conditions in which they will negotiate about their territory and their future,” Mr. Macron said.

The very friendly tone of the two leaders throughout reflected the ease they have established in several previous meetings. The two leaders, oozing camaraderie, referred to each other as “my friend,” “Emmanuel” and “Dear Joe,” throughout the day.

Later, at a lunch in Mr. Macron’s honor at the State Department, Antony J. Blinken, the secretary of state, laid out the broader significance of the war in Ukraine. Declaring the post-Cold War era over, he said the world was “in a global competition to define what comes next.” In that struggle, he said, the United States and France stood shoulder to shoulder in the defense of liberty and democratic societies.

Mr. Macron responded by couching the struggle in Ukraine as one that the United States and France could only feel as part of “our souls and our roots,” in that it involved “fighting for liberty and universal values.”

His tone was strikingly different from the one he had chosen on Wednesday, when he sharply criticized Mr. Biden’s signature Inflation Reduction Act for potentially “killing” European jobs through its massive subsidies for green manufacturing, suggesting that this was a policy that could “fragment the West.”

Such fragmentation of the alliance as the war enters its 10th month is precisely what Western leaders are most concerned about avoiding.

But showing some muscle in the United States is a near necessity for French presidents, who like to say that the mark of the strength of America’s oldest alliance is its capacity to accommodate even marked differences at times.

Mr. Macron warned Wednesday of “commercial hostility that could break out in the next several weeks, and we do not need that. What we need is to go hand in hand” — a process the French call “synchronization.”

Today, the French president’s concerns seemed to have evaporated as, once again, each leader stretched to accommodate the other’s preoccupations.

Mr. Biden said he made “no apologies” for the Inflation Reduction Act and its billions of dollars in government funding for green energy initiatives. But he appeared eager to ease the French concerns, saying that the bill had “glitches” that could be solved. “There’s a lot we can work out,” he said.

Of the law that provides tax credits for U.S. automakers that manufacture electric vehicles, among a host of other measures, Mr. Biden said “it was never intended to exclude folks who are cooperating with us.”

Mr. Macron also moderated his previous criticisms, saying he had told Mr. Biden of the need to “re-synchronize” their economic partnership to “succeed together.”

The combination of the war in Ukraine and the need to transition to carbon-neutral economies to fight climate change has placed great pressure on European economies.

The warmth of the two presidents toward each other, and more broadly in celebrating what Mr. Blinken called the “unwavering” friendship between the two countries, came just 14 months after relations collapsed in vitriolic recrimination over a deal Mr. Biden reached with Britain to help Australia build nuclear-powered submarines.

In a joint statement, the United States said it would support France’s maritime deployments in the Indo-Pacific region and both nations committed to working with China on combating climate change. Here again, past differences seemed to fade as the two leaders agreed to “coordinate on our concerns regarding China’s challenge to the rules-based international order.”

Mr. Macron has in the past suggested the United States was too confrontational toward China and that Europe must carve out a more measured position to ensure, among other things, that Russia not fall into the Chinese camp.

The two leaders also said they would focus on the need to bolster Europe’s defense capability.

“The presidents recognize the importance of a stronger and more capable European defense that contributes positively to trans-Atlantic and global security and is complementary to and interoperable with NATO,” the statement from Mr. Macron and Mr. Biden said.

This was an evident concession to Mr. Macron’s overriding conviction that Europe must establish “strategic autonomy,” even if the war in Ukraine and America’s decisive role in providing much-needed weapons to Kyiv have shown that the goal remains a chimera for now. There is no European army.

“Having the U.S. strongly supporting the Ukrainians in that time is very important not just for Ukrainians, but for the stability of our world today,” Mr. Macron said.

For today, autonomy was clearly off the table. On the table at a black-tie state dinner under a tent on the South Lawn of the White House were lobster, caviar and even American cheese (a test of the open-mindedness of the French) in celebration of a relationship in which, as Mr. Biden said, there may be “slight differences, but never in a fundamental way.”