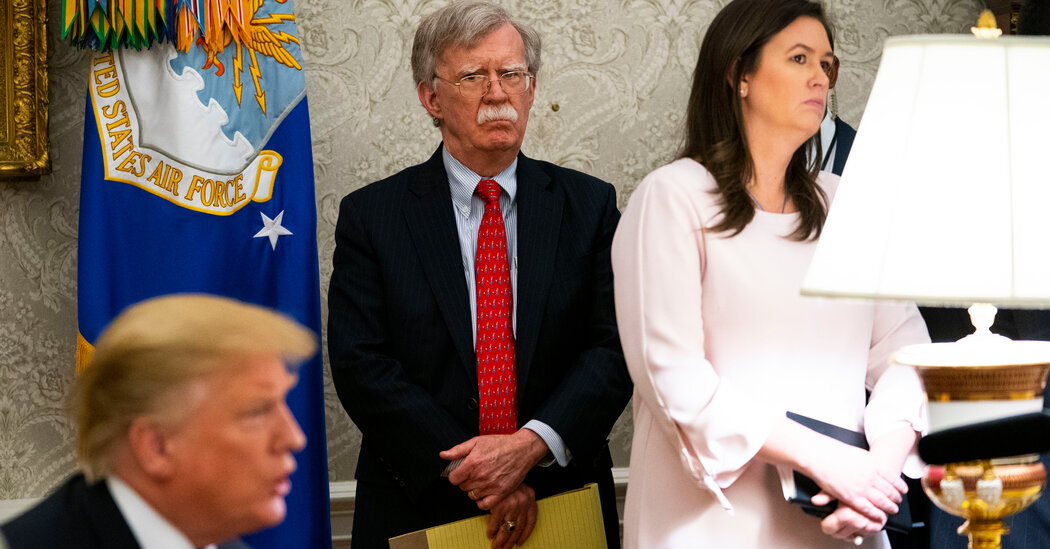 A career National Security Council staff member under President Donald J. Trump, who was pushed out of her position after she refused to go along with an effort to use the powers of the federal government to silence one of Mr. Trump’s chief critics, has been rehired for the post by President Biden, two people briefed on the matter said on Wednesday.

The staff member, Ellen Knight, had told a federal judge in 2020 that senior White House lawyers had pressured her to falsely claim that a book by Mr. Trump’s former national security adviser, John R. Bolton, contained classified information to keep its contents from becoming public.

Ms. Knight, a government classification expert, told the judge that after refusing to comply, she had been reassigned to the National Archives and Records Administration despite earlier expectations that she would transition to a permanent position at the National Security Council.

A spokeswoman for the National Security Council confirmed that Ms. Knight had been rehired.

“Ellen Knight is a dedicated career public servant,” said the spokeswoman, Emily Horne. “We’re thankful to have her return to the National Security Council as the senior director for records, access, and information security management, and benefit from her extensive experience in classified information management.”

A slew of federal officials, ranging from the director of the F.B.I. to climate scientists, were fired or reassigned during Mr. Trump’s presidency, as part of efforts to punish or silence them, they claimed. Few, particularly those in career positions, like Ms. Knight, have regained their posts.

Peter Strzok, the lead F.B.I. agent on the investigations of Mr. Trump’s ties to Russia and Hillary Clinton’s use of a personal email account, is suing the federal government to regain his job at the F.B.I. as a top counterintelligence investigator. At the time of Mr. Strzok’s dismissal, Trump administration officials claimed he had been fired because he had sent text messages that showed a political bias.

Ms. Knight’s disclosure about how the Trump White House handled Mr. Bolton’s book came to light in a lengthy letter sent in September 2020 to the judge who was overseeing a lawsuit brought by the Justice Department trying to recoup the profits from Mr. Bolton’s book, “The Room Where It Happened.”

Her letter backed up claims by Mr. Bolton’s lawyer, Charles J. Cooper, that a criminal investigation of Mr. Bolton and the lawsuit brought against him by the Justice Department had been politically motivated. Ultimately, her disclosure helped lead the Biden Justice Department to drop both matters against Mr. Bolton.

The effort to use Mr. Trump’s powers of classification to silence Mr. Bolton had occurred during Mr. Trump’s first impeachment, Ms. Knight had told the federal judge. Shortly before Mr. Bolton’s book — which portrayed Mr. Trump as corrupt and incompetent — was scheduled to be released, Ms. Knight said that White House lawyers had pressured her to reverse her determination that the manuscript of Mr. Bolton’s book contained no classified information and could be published.

Among those who Ms. Knight said pressured her was the top lawyer on the National Security Council, John Eisenberg, and the deputy White House counsel, Patrick Philbin, who is now a partner at the law firm Ellis George Cipollone O’Brien Annaguey LLP.

Mr. Bolton praised the decision in a written statement.

“Trump’s disgraceful firing of Ms. Knight is another stain on his presidency,” Mr. Bolton said. “Those in the NSC and White House Counsel’s Office who tried to intimidate Ms. Knight, and then carried out Trump’s personal vendetta, should be held to account.”