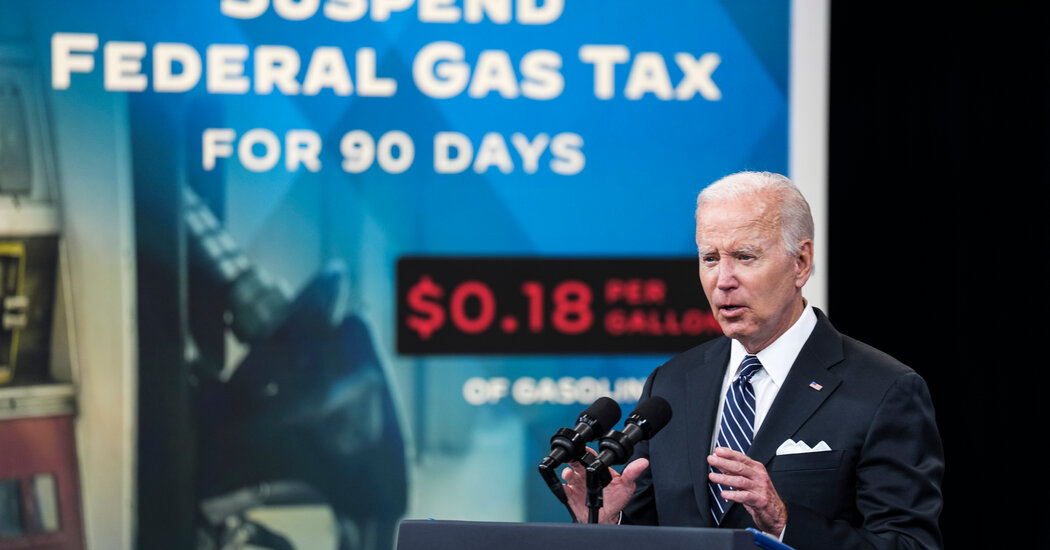 WASHINGTON — With fuel prices near record highs, President Biden on Wednesday urged Congress to temporarily suspend the federal gas tax and give Americans “just a little bit of breathing room,” even as the proposal faced dim prospects on Capitol Hill.

In a speech from the White House, Mr. Biden asked Congress to lift the federal taxes — about 18 cents per gallon of gasoline and 24 cents per gallon of diesel — through the end of September, shortly before the fall midterm elections. The president also asked states to suspend their own gas taxes, hoping to alleviate the economic pain that has contributed to his diminishing popularity.

“I fully understand that the gas tax holiday alone is not going to fix the problem,” Mr. Biden said. “But it will provide families some immediate relief. Just a little bit of breathing room as we continue working to bring down prices for the long haul.”

Critics have questioned the effectiveness of gas tax holidays, dismissing the idea as little more than an attempt by the White House and vulnerable Democrats to show that the party is attentive to Americans’ financial pain.

White House officials, acknowledging the opposition from leading Democrats as well as Republicans in Congress, said Mr. Biden planned to reach out to both parties to build support — marking another test of the president’s clout at a time when his approval ratings are low and his party faces losses in the midterm elections.

Mr. Biden’s decision to go ahead with his appeal to Congress, despite the lack of consensus even among Democrats, was the latest sign of the desperation in the White House to find even modest steps to address an issue that is eating away at the president’s support.

Shortly after Mr. Biden spoke on Wednesday, Representative Steny H. Hoyer, Democrat of Maryland and the majority leader, questioned whether Democrats had enough votes to move forward with the proposal.

Senator Mitch McConnell of Kentucky, the Republican leader, quickly dismissed the president’s call for suspending the tax, all but dooming the plan in an evenly divided Senate.

“This administration’s big new idea is a silly proposal that senior members of his own party have already shot down well in advance,” Mr. McConnell said.

Economists have criticized the idea of suspending the federal gas tax as a wasteful step for the government, given the revenue that would be sacrificed in a bid to provide only a mild dose of relief to consumers. Its impact on them would be quite limited: The tax is now such a small slice of the price at the pump, coming in at less than 5 percent of the total cost, that Americans might not even notice its absence.

For example, even if all of the benefits were passed on to consumers, the owner of a Ford F-150 that gets 20 miles to the gallon driving a thousand miles per month would save about $9 if the federal gas tax were suspended.

While the administration and some congressional Democrats have for months discussed such a suspension, Republicans widely oppose it and have accused the administration of undermining the energy industry. Even members of Mr. Biden’s own party, including Speaker Nancy Pelosi, have expressed concern in the past that companies would absorb much of the savings, leaving little for consumers.

Mr. Biden said he wanted to ensure that consumers benefited from the moratorium on the federal tax. The administration estimates that the combination of several possible steps — the suspension of the tax, a halt on state gas taxes and an increase in refining capacity by oil companies — would lower gas prices by at least $1 a gallon.

“I don’t think it moves the needle on people’s willingness to buy more, and it doesn’t exactly save them a whole lot of money, either,” said Garrett Golding, a business economist at the Federal Reserve Bank of Dallas. “It sounds like something is being done to lower gas prices, but there’s not a whole lot of there there.”

This year, oil and refined fuel prices rose to their highest levels in 14 years because of Russia’s invasion of Ukraine, the sanctions imposed on President Vladimir V. Putin and a rebound in energy use as the United States recovers from the coronavirus pandemic. The White House has increasingly tried to direct the blame for the rising prices toward Russia, a strategy that has done little to quell anxiety among Americans. The national average for regular gasoline was $4.95 per gallon on Wednesday, according to AAA, after reaching $5 this month.

Congress has not increased the federal gas tax since 1993. But it has never lifted the tax, either. Taxes on gasoline and diesel now supply a majority of federal funding used to build and maintain highways — $36.5 billion in 2019 — although outlays have exceeded dedicated revenues in recent years.

That means Mr. Biden’s latest step to address one political vulnerability could undermine funding for one of the primary legislative accomplishments during his time in office: investments in infrastructure.

Representative Peter A. DeFazio, Democrat of Oregon and the chairman of the Transportation and Infrastructure Committee, said the proposal would have a “snowballing effect” of delaying the administration’s goals to repair highways and transit systems across the United States.

Mr. Biden sought to assuage some of those concerns on Wednesday. He said the fact that the national deficit fell by $1.6 trillion in the last year would provide the administration breathing room to suspend the tax. And Jennifer M. Granholm, the energy secretary, told reporters that the White House would discuss with Congress other pots of money to backfill the loss caused by the tax. The suspension of the taxes would cost roughly $10 billion.

“We’ll still be able to fix our highways and bring down prices of gas,” Mr. Biden said. “We can do both at the same time.”

Ms. Granholm will also speak to oil company executives this week about lowering the price of gas. She did not specify how exactly the administration would ensure that savings from the suspension trickled down to consumers, rather than resulting in a profit for gas companies.

“We’ll have that as an honest, earnest conversation tomorrow asking how can we be partners in providing relief for people,” Ms. Granholm said, adding that the president planned to speak to members of Congress about the proposal in the coming days.

Progressives and energy experts have advocated alternative ways to smooth out gas price shocks or siphon off some of the ballooning profits that oil companies and refiners have taken in while supply has been constrained. In her 2008 campaign for the presidency, as inflation-adjusted prices approached an even higher point, Hillary Clinton proposed pairing a gas tax holiday with a levy on oil company profits.

But among the limited tools that the federal government has at its disposal to lower gas prices, lifting taxes could resonate the most with Americans.

“That’s the thing that voters care about,” said Erich Muehlegger, an associate economics professor at the University of California, Davis.

Dr. Muehlegger’s research has found that drivers adjust their consumption more in response to changes in gas prices than they do to market-based changes of similar magnitude, in part because of the news media attention generated by those changes.

Senator Maggie Hassan, Democrat of New Hampshire, who faces a tough re-election bid, said Mr. Biden would need to go further to provide relief to voters. In a statement, she said the White House should move forward with a gas tax suspension for the rest of the year, rather than only three months.

“I will keep pressing my colleagues in Congress to suspend the gas tax, and I continue to urge the president to take executive action to immediately lower families’ energy costs,” she said.

States have more power to lower gas prices, since their taxes and fees have been steadily rising, to about 38 cents per gallon on average. Three states have so far passed and completed gas tax holidays: Maryland, Georgia and Connecticut. New York suspended its tax at the beginning of this month, and Florida will lift its tax for the month of October.

However, gasoline producers and retailers would most likely reap some of the benefits. An analysis by economists with the University of Pennsylvania’s Penn Wharton Budget Model showed that in the states where gas tax holidays have concluded, 58 percent to 87 percent of the suspended gas tax value was passed on to consumers, with suppliers absorbing the rest. A federal suspension would be so much smaller that it may be obscured by the volatile underlying price of oil, which has fallen over the past week.

Mr. Biden also took aim at oil companies on Wednesday, demanding that they expand refining capacity to bring down costs at the pump, only days after accusing executives of profiteering and “worsening the pain” for consumers. Even as refineries have struggled to keep up with growing demand, refiners have added less than 1 percent to their capacity worldwide.

“My message is simple to the companies running those gas stations and setting those prices at the pump: This is a time of war and global peril,” Mr. Biden said. “These are not normal times. Bring down the price you are charging at the pump.”