Biden news – live: US government weighing release of up to 1 million barrels of oil from strategic reserve – The Independent 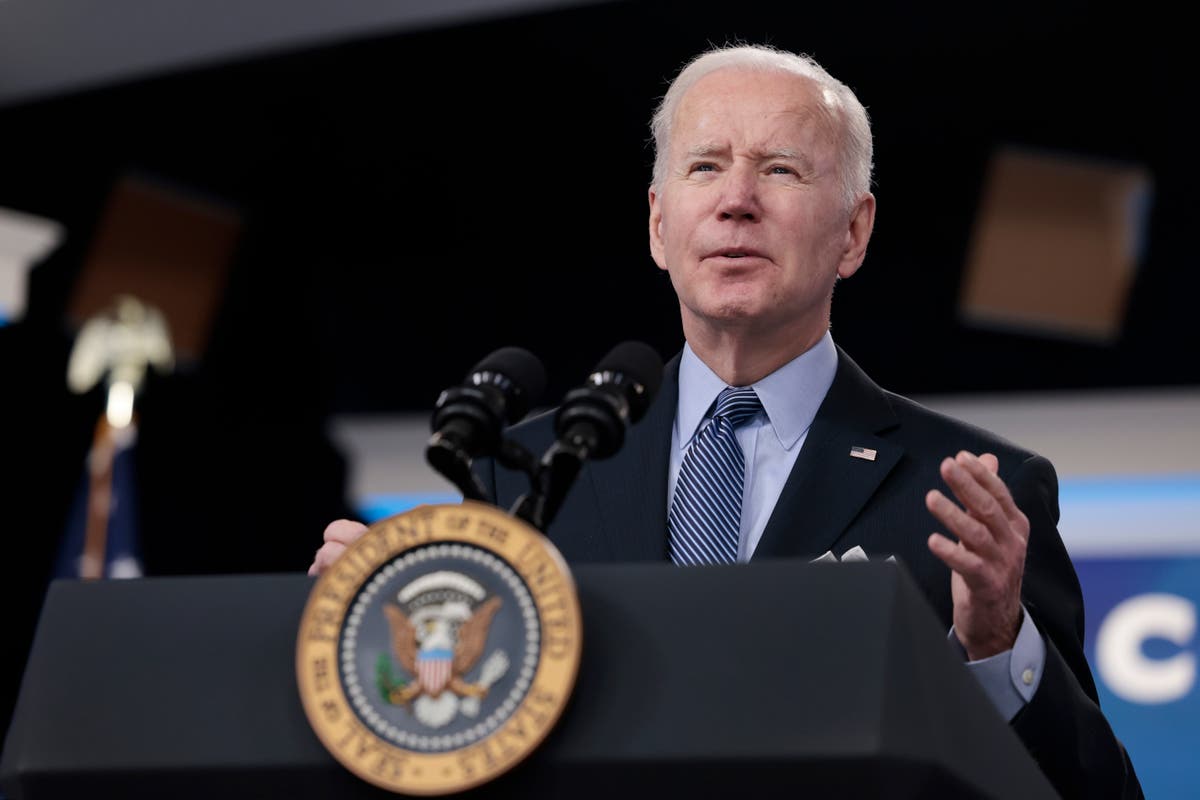 ‘You’ve got to be silly’: Biden hits back at Ukraine questions from Fox News reporter

President Joe Biden is preparing to order the release of up to one million barrels of oil per day from the strategic petroleum reserve in a bid to control prices that have spiked after the US and its allies imposed strict sanctions on Russia for its invasion of Ukraine.

The announcement could come as soon as Thursday, according to reports.

Mr Biden spoke with Ukrainian Volodymyr Zelensky to discuss the situation in Ukraine. The call comes as Ukrainian and Russian negotiators discuss a de-escalation agreement that could see Russia draw down forces from the area near Kyiv.

Both the White House and the Pentagon have said that they believe Russian President Vladimir Putin is being misinformed about progress in the war by his senior advisers.

Mr Biden also gave a speech on the state of the coronavirus pandemic, announcing the launch of a central website for resources, before receiving his second booster shot of the Pfizer vaccine.

Meanwhile, after contentious nomination hearings that saw Republican senators harangue her about critical race theory, Ketanji Brown Jackson has picked up a crucial supporter: Maine Senator Susan Collins, who has become the first Republican to announce she will vote to confirm her.

Joe Biden warns US will not enough Covid vaccines this fall

Joe Biden has warned that the US will not have enough Covid vaccines this fall to ensure free and easy access for all Americans if Congress fails to pass the $22.5bn in additional funding.

The US President said that the country has enough supply to ensure people eligible for fourth shots have access to them.

The CDC recommended an additional Pfizer or Moderna dose for people who are 50 years of age and above as well as those who have compromised immune systems.

Evgeny Popov made the statement on the controlled broadcast over in Russia.

Mr Popov has been an avid supporter of the former president and frequently speaks out on his dislike of president Joe Biden.

He told viewers that it’s time for the Russian people to call on Americans to change “the regime in the US” before its term expires.

A Russian state TV host has called on Americans to re-elect the former president, Donald TrumpEvgeny Popov made the controversial statement on the controlled broadcast over in Russia.The TV personality has been an avid supporter of Trump, and frequently speaks out on his dislike of president Joe Biden.He told viewers that it’s time for the Russian people to call on Americans to change “the regime in the US” before its term expires.He added: “to again help our partner Trump to become President.”Click here to sign up to our free newsletters.

Morning Joe hosts slammed Donald Trump on Wednesday for asking Vladimir Putin to release “dirt” about Hunter Biden’s alleged business dealings in Eastern Europe, a request he made during an interview with journalist John Solomon on the Just the News television show.

She replied: “What kind of American, let alone an ex-president, thinks that this is the right time to enter into a scheme with Vladimir Putin … There is only one and it’s Donald Trump.”

President Joe Biden is preparing to order the release of up to one million barrels of oil per day from the strategic petroleum reserve in a bid to control prices that have spiked after the US and its allies imposed strict sanctions on Russia for its invasion of Ukraine.

A person familiar with the decision was quoted by Bloomberg as saying that the announcement could come as soon as on Thursday when the president is scheduled to give a speech on the rising energy prices.

It was reported that the duration of the release hasn’t been finalised but could last for several months.

President Joe Biden on Wednesday said the US government won’t be able to afford to provide Americans with the Covid-19 booster shot he received on-camera Wednesday if Congress doesn’t step up to allocate more funding for vaccines, tests, treatments, and other Covid-19 needs.

US to provide $500m in support for Ukraine’s government

The United States will provide Ukraine’s government with an additional $500 million in “direct budgetary aid” to support its operations as Ukrainian forces continue to fight against Russia’s unprovoked invasion.

Andrew Feinberg has the latest from Washington, DC.

President Joe Biden’s administration is expected to lift a public health order imposed by Donald Trump that blocked most asylum seekers from the US-Mexico border during the Covid-19 pandemic, according to reports citing administration officials familiar with the situation.

The “kinetic” aspect of the Ukrainian conflict has so far played out almost entirely in Ukrainian territory, but the implications for the world’s strategic balance are still huge – particularly in the nuclear realm, with Vladimir Putin putting his nuclear forces on a “special regime of combat duty” just two days after his army invaded the neighbouring country.

The Biden administration and other Nato governments are now trying to rework their strategy for a Russian nuclear escalation, or even an accident involving nuclear reactors or waste storage facilities damaged by the invading forces.

Jonathan Tirone has this report.