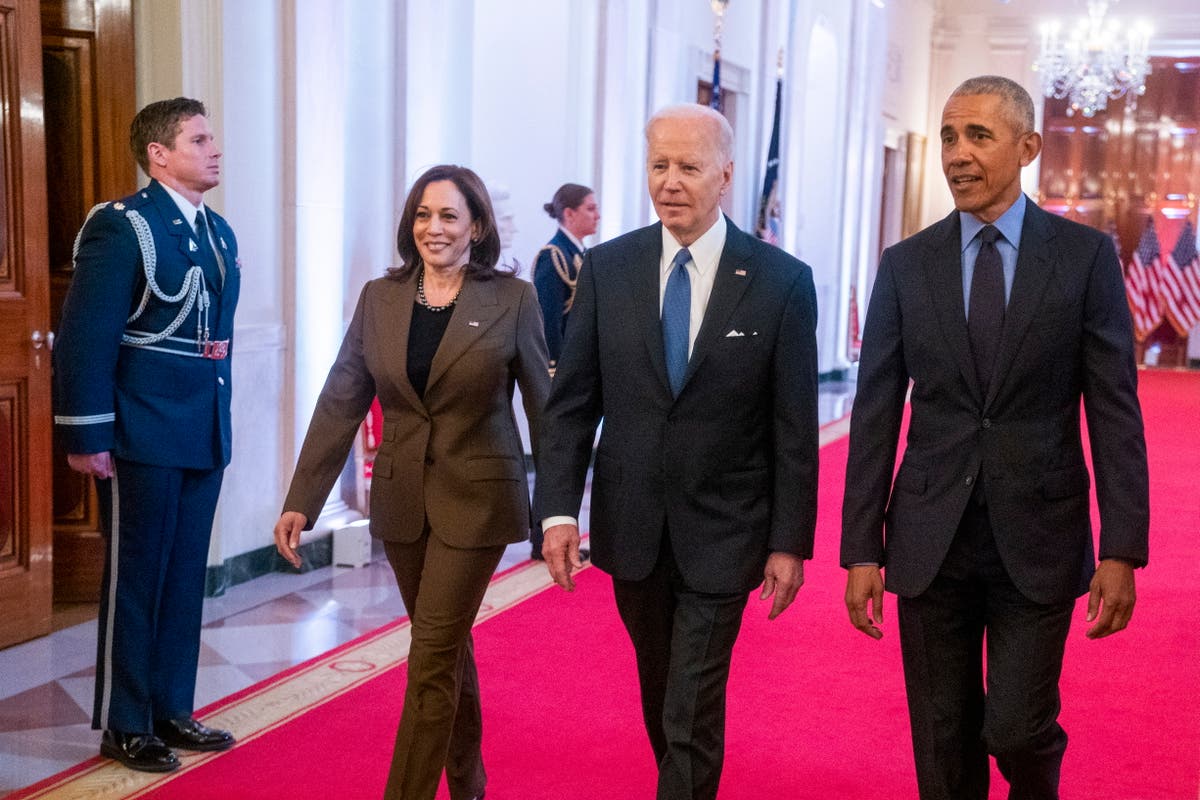 Barack Obama visited the White House on Tuesday for his first public event at the executive mansion since he left office. He participated in a celebration of the Affordable Care Act, aka Obamacare, as Joe Biden announced changes to the healthcare programme that could see as many as 200,000 uninsured Americans become eligible for new coverage.

The visit has many Democrats hoping that Mr Biden can benefit from his former boss’s still-high approval rating among the Democratic base. Mr Biden has lately struggled to raise his poor standing in the polls and there are serious worries that apathy and disappointment among Democratic voters could give an opening to Republicans in this year’s midterm elections. Mr Obama says that to win in the midterms, Democrats have a story to tell, they “just got to tell it.”

Meanwhile, on Capitol Hill, the Senate Judiciary Committee yesterday voted 11-11 on Judge Ketanji Brown Jackson’s nomination to the Supreme Court. The result will not stop Ms Jackson’s nomination from proceeding to the Senate floor; she appears to already have the support of 53 senators, with Republicans Susan Collins, Lisa Murkowski and Mitt Romney all breaking ranks to back her.

The Biden administration is stepping up its supplies of lethal aid to Ukraine, and is allocating hundreds of millions of dollars in new funding to the country’s government and military as they fight back against the Russian assault.

Teenage shooter Kyle Rittenhouse, who killed two people at a Black Lives Matter protest in Kenosha in 2020, has long complained that Joe Biden bracketed him with “white supremacists” in a campaign ad – and is now hitting out at the president over the intensifying probe into his son’s alleged financial misconduct.

The White House yesterday announced a “whole-of-government effort to prevent, detect, and treat Long Covid”, with plans including research into the condition’s causes and impacts not only on individuals but across populations. Long Covid has affected many people previously able to work to the point where they effectively have a new disability, meaning they may be entitled to new rights of which they’re unaware.

Barack Obama was in ebullient spirits during his White House visit yesterday, including when asked about the Democrats’ prospects in what could be a punishing midterm election year. In a characteristically avuncular Obama-esque reply, he told a journalist the following:

Joe Biden has nominated a new head of the US Coast Guard: Admiral Linda Fagan, who if confirmed would become the first woman to head a branch of the US military.

Maria Cantwell, head of the committee that will hold her confirmation hearings, remarked that “Admiral Fagan’s nomination will inspire generations of American women to strive to serve at the highest level in the Armed Forces”.

Gustaf Kilander has the story:

Will Obama and Biden’s bromance do anything for the Democrats?

The Independent’s Holly Baxter takes a look at yesterday’s White House appearance by Barack Obama, writing that it at least provided some welcome emotional warmth at a deeply negative moment…

At the same time, though, she ponders whether the visit can really offer much to Democrats as the president struggles around the 40 per cent approval mark and his agenda faces ongoing obstruction in Congress.

Read her take below.

Analysis: the worst of the KBJ hearings

As the confirmation of Ketanji Brown Jackson draws near, Andrew Feinberg has this look back on the depths that were plumbed at her hearings by the Judiciary Committee’s Republican contingent and their colleagues on the Senate floor.

“Republican senators,” he writes, “spent the majority of their speaking time in both settings airing grievances regarding Democrats’ treatment of prior nominees going back to the Senate’s rejection of Judge Robert Bork more than three decades ago. They also subjected Jackson, a Harvard Law School graduate who has thrice been confirmed by the upper chamber (twice to court seats and once to a seat on the US Sentencing Commission), to some of the most bizarre inquiries ever directed at a nominee for the highest court in the land.”

Read his full rundown below.

(None of the stories he tells are in the same category as Marjorie Taylor Greene’s declaration that the three GOP senators voting to confirm Ms Brown Jackson are “pro-paedophile”.)

After years of a perpetually acrimonious atmosphere in the White House, the sight of Barack Obama joking with Joe Biden and Kamala Harris yesterday was a flashback to what feels like a different age.

Here’s how the former president introduced his onetime deputy.

Conservative lawmakers and commentators alleged that Mr Obama stole the show during his visit to the White House on Tuesday.

In widely-shared video clips – that many have said are out-of-context — the president can be seen raising his hands in exasperation as a group of people showered Mr Obama with attention.

Kinzinger criticises GOP members for unwillingness to speak on Ukraine

Illinois Republican Representative Adam Kinzinger criticised members of his party on Tuesday for what he sees as their unwillingness to speak out against the crisis in Ukraine.

“We are being governed by a bunch of children,” Mr Kinzinger said. “By a bunch of people that are not serious about running the United States of America and truly don’t understand the threat that’s out there from Vladimir Putin, from China and from some of these actors in the world that want to destroy our place here.”

“The world order is being challenged for the first time since World War II and they’re sitting around thinking today about how we can win our next election, what the newest outrage is, what’s the next thing we can do to get people angry and upset and get their money from them for our reelection,” he added.