Biden, in Sign of Confidence, Will Visit Iowa in 2020 Election’s Final Days 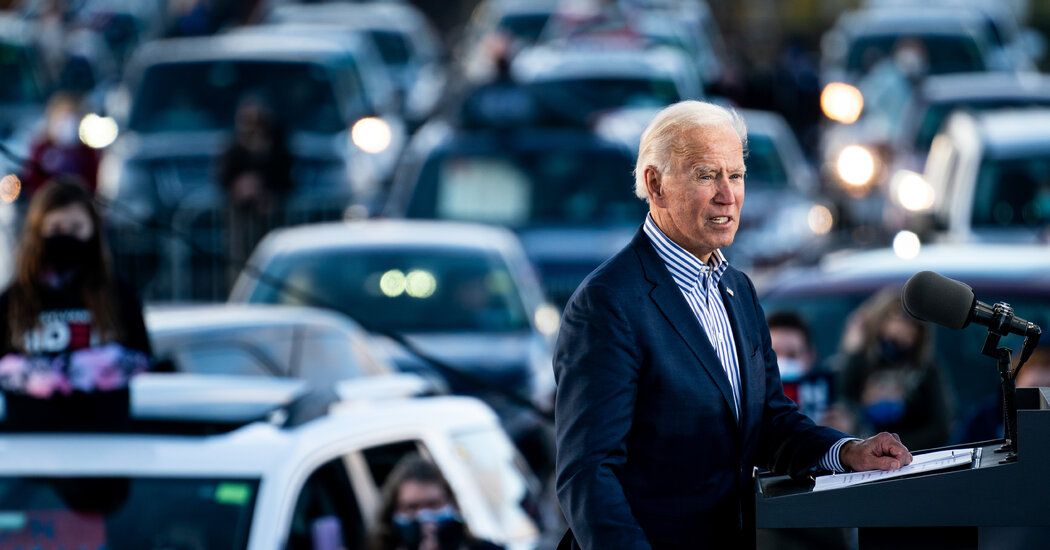 Joseph R. Biden Jr. will travel to Iowa this week, he announced on Monday, a sign of confidence that suggests his campaign is significantly expanding its electoral map with just eight days left in the presidential race.

And in a remarkably bold pronouncement for a Democratic presidential candidate, Mr. Biden declared that he would win Michigan, Wisconsin and Minnesota, three critical battleground states that might be his key to victory. He also said he thought he had a “fighting chance” in Ohio, North Carolina, Georgia and Iowa, states that were once thought to be a reach for Democrats but that recent polls indicate are now up for grabs.

“I am not overconfident about anything,” Mr. Biden said. “I just want to make sure we can earn every vote possible.”

“That blue wall has to be re-established,” he added, referring to the Northern battleground states, which are traditionally Democratic.

Mr. Biden’s call to resurrect the “blue wall,” which Donald J. Trump knocked down in 2016, and his announcement of an intense final push that includes visits to Iowa and Georgia, both states that Mr. Trump won handily, suggest that the Biden campaign feels it is in a position of strength heading into the final stretch.

It also comes as some Democrats have privately expressed concern about Mr. Biden’s relatively light schedule during the coronavirus pandemic even as he is leading in polls. He traveled to Pennsylvania on Saturday, but his only in-person appearance on Sunday was going to church near his home in Delaware. (He also made a brief appearance during a virtual concert held by his campaign.)

His cautious approach to campaigning has drawn ridicule from Mr. Trump, who poked fun at his opponent while at his third rally of the day in Martinsburg, Pa. “He said he doesn’t do these kinds of rallies because of Covid,” Mr. Trump told a large crowd gathered at an airport hangar, after throwing red caps into the audience. “No, he doesn’t do them because nobody shows up.”

And at another rally on Monday in Lititz, Pa., the president mocked Mr. Biden for his sparse travel schedule, saying that if the former vice president lost, “he should be ashamed of himself because he didn’t work.”

Moments after Mr. Biden revealed his plans, his campaign provided more details about his travel schedule, indicating he would travel to Iowa and Wisconsin on Friday. His campaign had already announced his plans to travel to Georgia on Tuesday and Florida on Thursday.

Trying to stave off any criticism about his travel, Mr. Biden on Monday offered an explanation for his careful approach to campaigning during the pandemic.

“The big difference between us and the reason why it looks like we’re not traveling — we’re not putting on superspreaders,” he said.

It is not unheard-of for campaigns to make late forays into long-shot states, sometimes to force their opponents to spend more resources there and sometimes to help down-ballot Senate or House candidates. But polling has suggested that Mr. Biden is competitive in both Georgia and Iowa, where the Democratic Senate candidate, Theresa Greenfield, is also in a tight race. An average of current polls shows Mr. Biden with a narrow edge of three percentage points over Mr. Trump in Iowa, according to The Upshot’s calculator, and roughly tied with the president in Georgia.

Mr. Biden’s schedule in the last week of the campaign may prompt questions about whether his campaign is overly confident in his electoral prospects in crucial battlegrounds like Michigan and Pennsylvania, two states that Mr. Trump narrowly won in 2016. Mr. Biden’s decision to travel to Wisconsin, another Midwestern swing state that Mr. Trump carried in 2016, also suggests his campaign is perhaps more wary of his chances there.

Mr. Trump spent Monday focused on Pennsylvania. At his first rally, in Allentown, the president ripped into Mr. Biden’s running mate, Senator Kamala Harris of California, in demeaning and personal terms, saying, “She will not be the first woman president — you can’t let that happen.” Mr. Trump also mocked the way she laughed during her “60 Minutes” interview on Sunday.

The president went on to offer caustic negative appraisals of other prominent women he said had treated him badly — the CBS correspondent Lesley Stahl, NBC’s Savannah Guthrie and Speaker Nancy Pelosi. Moments later, he trumpeted his appeal to “suburban women,” despite polls showing him trailing Mr. Biden among suburban women in battleground states by more than 20 percentage points.

Vice President Mike Pence, whose office is facing a coronavirus outbreak, was also on the trail on Monday in Minnesota, where the Trump campaign has held out hope for a victory.