Biden Helped Democrats Avert a ’22 Disaster. What About ’24? 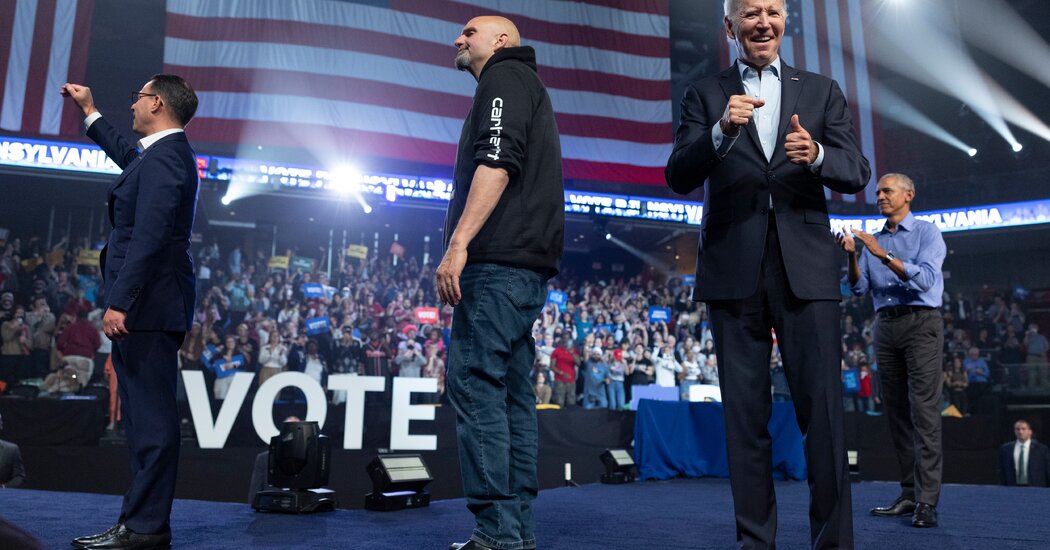 Expecting a cataclysmic midterm election, many Democrats had been bracing for an end-of-year reckoning with whether President Biden, who once declared himself a “bridge” to a new generation, should give way to a new 2024 standard-bearer.

But the stronger-than-expected Democratic showing has taken the pressure off.

And Donald J. Trump’s decision to announce a run for president again, and the Republican backlash against him, have abruptly quieted Democrats’ public expressions of anxiety over Mr. Biden’s poor approval ratings, while reminding them of Mr. Biden’s past success over Mr. Trump.

Now, as Mr. Biden mulls a decision over whether to seek a second term, interviews with more than two dozen Democratic elected officials and strategists suggest that, whatever misgivings some Democrats may harbor about another Biden candidacy, his party is more inclined for now to defer to him than to try to force a frontal clash with a sitting president.

In recent days, officials ranging from Representative Henry Cuellar, one of the most conservative House Democrats, to Representative Pramila Jayapal, the chair of the Congressional Progressive Caucus, have said they would support another Biden bid.

In private conversations, younger Democratic operatives have shifted from discussing potential job opportunities in a competitive presidential primary to gaming out what a Biden re-election campaign might look like. And a variety of lawmakers have lauded Mr. Biden for the party’s history-defying midterm performance, crediting him with the major legislative accomplishments they were able to run on and with pressing a message that cast Republican candidates as extremists who threatened democracy.

Already, Mr. Biden appears to be improving Democrats’ confidence in him: A recent USA Today/Ipsos poll found that 71 percent of Democrats surveyed believe he could win in 2024, up from 60 percent who said the same in August, though they were evenly divided on whether he should be the 2024 nominee.

The concerns about Mr. Biden’s overall weak standing in public opinion polls — which was a burden for many Democratic candidates — have not dissipated entirely. And some Democrats say that the challenges confronting the 80-year-old president and his party should not be glossed over in the party’s relief over the outcome of the elections.

Stanley B. Greenberg, the veteran Democratic pollster, pointed to a postelection survey that highlighted Democratic vulnerabilities. The poll, conducted by the organization Mr. Greenberg helped found, warned of “the continuing risk of a Republican challenge centered on borders and crime.” It determined that “Trump may have been weakened in this election, but another leader with that message” poses “an accelerated risk.”

In an interview, Mr. Greenberg said he came away from the survey “believing Democrats have huge issues to address.” While “President Biden has done remarkable things,” he added, “I think we need a new voice to address huge challenges but also huge opportunities.”

The Aftermath of the 2022 Midterm Elections

A moment of reflection. In the aftermath of the midterms, Democrats and Republicans face key questions about the future of their parties. With the House and Senate now decided, here’s where things stand:

A new era for House Democrats. Speaker Nancy Pelosi, the first woman to serve in the post and the face of House Democrats for two decades, will not pursue a leadership post in the next Congress. A trio of new leaders is poised to take over their caucus’s top ranks.

Divided government. What does a Republican-controlled House and a Democratic-run Senate mean for the next two years? Most likely a return to the gridlock and brinkmanship that have defined a divided federal government in recent years.

Surveys of voters leaving the polls found that two-thirds, including nearly a third of Democrats, said they did not want Mr. Biden to run for president again — though Mr. Biden’s allies have noted those numbers are not predictive of how voters would respond when presented with a choice between the president and a Republican candidate. At a postelection news conference, Mr. Biden insisted that those poll ratings would not affect his decision. He has said that he intends to run but planned to discuss the race with his family over the holidays and could announce a decision early next year.

David Axelrod, who served as chief strategist for President Barack Obama, said the midterm elections had given Mr. Biden “a little giddyup in his step.” As for a run for a second term, Mr. Axelrod said, “If he were 60 and not 80, there would be absolutely no doubt.”

Democrats eager for Mr. Biden to make way for a new cohort of presidential aspirants pointed to the decision by Speaker Nancy Pelosi, 82, to step down as the House Democratic leader.

Shelia Huggins of North Carolina, a member of the Democratic National Committee, said the country was “looking at what the future looks like, especially with the speaker deciding that now is the time for her to step away and to give other people an opportunity.”

Ms. Huggins, who has been open about her reservations regarding Mr. Biden, praised the president’s record but added, “I just still have some concerns about him running again. Part of it does have to do with his age.”

Quinton Lucas, the mayor of Kansas City, Mo., said he wanted Mr. Biden to run again and was unbothered by his age. But he also said that the next Democratic nominee should be ready to run against candidates other than Mr. Trump, who is 76, as Republicans weigh an array of younger potential contenders.

“The party needs to be prepared for a Ron DeSantis, next-generation Republican,” Mr. Lucas said. “President Biden, in his record of experience, and really his more recent successes, is able to handle that. But I think that’s what the American people will be looking at.”

Republicans have long made issues of Mr. Biden’s age and verbal missteps, and polls show that plenty of Democrats, too, have reservations about Mr. Biden’s age.

“Most people in this country don’t know many 80-year-olds that can run the entire country,” said Tyler Jones, a Democratic strategist in South Carolina. “That’s not to say that they don’t exist, and it’s not to say that he can’t do it, but it is a very rare thing. And so the burden, unlike most presidents, the burden is on Biden to show the country that he can not just win in ’24, but lead for the next four years.”

Mr. Jones said it would be “foolish and counterproductive” not to have a serious conversation in the party about the strengths and weaknesses of a Biden candidacy.

But there is no doubt that Mr. Biden would have a significant edge should he run again, the kind of advantage that a man who sought the presidency for decades might resist giving up. It is rare for an incumbent president to lose re-election — or, in recent years, to face a major primary threat — and the Democratic National Committee has already laid groundwork to support Mr. Biden in 2024, preparing to take on a variety of Republican candidates. Mr. Biden’s political advisers have also been ramping up outreach to his early backers, and his team has scheduled a gathering for major supporters and key party figures to discuss the administration’s agenda on Dec. 15 at the White House.

Asked about concerns some Americans have about Mr. Biden’s age, Andrew Bates, a White House spokesman, said Mr. Biden had the “most successful legislative record of any president since Lyndon Johnson,” citing achievements on infrastructure and gun policy. He extolled Mr. Biden’s record on the world stage and his political strengths.

“The same coalition President Biden built to expand the map for Democrats in 2020 powered our historic midterm wins, including unprecedented youth turnout,” Mr. Bates said. “The president galvanized independent voters with a message widely adopted across the party, highlighting the differences between his values and ultra-MAGA Republicans’ agenda.”

Regardless of the next Republican nominee’s age, some Democrats suggest the G.O.P. is vulnerable to the same challenges that drove major defeats this year.

“Republicans failed in a year when they should have been hugely successful,” said Gov. J.B. Pritzker of Illinois. “People have rejected the anti-little ‘d’ democratic values that they have run on.”

Others argue that it would be possible to support Mr. Biden if he runs while also backing generational change in the party.

Jane Kleeb, the chair of the Nebraska Democratic Party, stressed her hope that, overall, “batons are beginning to be passed.” But she also said she would support another Biden campaign.

“It doesn’t have to be all or nothing,” she said.

While a left-leaning advocacy group has already launched a “Don’t Run Joe” campaign to urge Mr. Biden to step aside, few Democrats expect, at this point, that he would draw a major primary challenge. But if he does not run, some Democrats think the size of the field could resemble that of 2020, which swelled to nearly 30 candidates.

Some of them, including Vice President Kamala Harris, Transportation Secretary Pete Buttigieg, Senator Amy Klobuchar of Minnesota and Senator Elizabeth Warren of Massachusetts, are often mentioned in political circles as potential contenders if Mr. Biden does not run. Senator Bernie Sanders of Vermont, 81, who maintains a devoted following on the left, has not ruled out a bid if Mr. Biden opts out. Several of them campaigned for candidates in battleground states this year, fostering relationships that could prove useful in the future.

There is also a crop of Democratic governors, many of whom have stressed their support for Mr. Biden, who have raised their national profiles this year, including Mr. Pritzker, Gavin Newsom of California and Phil Murphy of New Jersey, the chairman of the National Governors Association. Gov. Roy Cooper of North Carolina has also attracted attention as chairman of the Democratic Governors Association.

Other Democratic governors, including Gretchen Whitmer of Michigan and Jared Polis of Colorado, earned national notice as they won re-election by commanding margins.

“There are some great prospects who are considering running in the next election in which there is not an incumbent,” said Mr. Pritzker, a longtime Democratic donor who has supported many Democratic governors. “I think the president is running for re-election. So I think you’ll see Democrats supporting the president.”

Mr. Newsom recently made precisely that commitment to the White House, Politico reported, and said that he would not run even if Mr. Biden did not seek a second term.

Mr. Pritzker, for his part, said he intended to support Mr. Biden. He also noted that Chicago was vying to host the 2024 Democratic National Convention and said that he had “every intention of being governor of Illinois for the next four years.”

Other Democrats, including Representative Ro Khanna of California, have worked to introduce themselves around the country. And some who won challenging races are already being discussed in “future of the party” conversations, a list that Senator Raphael Warnock of Georgia could join if he wins re-election in his runoff next month.

“There’s too much talent and too much ambition in our party to think it’s going to be a coronation,” Mr. Jones said of the 2024 presidential election.

Still, he added, “Ultimately, they’re waiting to see what the president is going to do.”